Marine VHF whip antennae - what are they?

For marine VHF (156~162 MHz), the most commonly used antenna is a 1/2-wave dipole or a collinear array in the form of a fibreglass rod. Collinear arrays are used to increase gain in some antennas. Dipoles/collinear arrays by their nature do not need a groundplane. This much I gather.

However, another popular type - especially with the sailing crowd - is the stainless steel whip antenna. Also supposedly a 1/2-wave antenna, it is roughly 1 m long.

The following page has examples of both types of antennas - AV7M is a fibreglass rod dipole, and AV53BIS3 is a stainless steel whip: http://www.comrod.com/category.php?categoryID=129

According to the datasheet and other information available on this type of antenna, the stainless steel whip is an end-fed dipole, and does not need any external ground plane.

The following page describes the concept of an end-fed dipole: http://www.aa5tb.com/efha.html The cylindrical base of the VHF whip then, it can be assumed, contains the LC matching circuit/balun(?) described.

We learn that the antenna doesn't work without a "counterpoise" - and it seems reasonable to assume that the VHF whip is in fact constructed similarly to Figure 15.

With this in mind:

Would also much appreciate references to literature that explains the physics of antennas in general and these types in particular, with sound scientific base without going deeply into the maths. Have had a hard time finding quality literature among the seemingly vast quantities of "black magic" antenna cookbooks.

Without having one of these antennas to disassemble (perhaps destructively), I can't tell you exactly how they are constructed. But maybe I can address some of your underlying concerns.

Firstly, counterpoise. In one sense, this is an elevated screen of wires designed to take the place of Earth. This sense developed with the Marconi antenna (what we'd probably call a "vertical") in the late 19th century.

Some people will tell you that one of these senses is wrong, but the fact is that "counterpoise" has no rigorous definition: you have to figure it out by context.

In practice, the feedline or mast will become the counterpoise. Since you probably didn't intend for the feedline to have RF current all over it, you might want to do something about that. W8JI has a pretty good article on the subject. In summary, you may want to isolate the feedline with a transformer, but if you don't, it's not the end of the world. 25W transmit power probably isn't enough to cause arcing or RF burns no matter what you do. Without disassembling an antenna it's hard to say exactly what the feed and matching arrangement is.

However, it is pretty safe to assume that in all cases, the feedpoint impedance is high, and we need some way to make it lower to match 50 ohms. If the impedance is already purely resistive, then a transformer with the right turns ratio will do the trick.

But we can also accomplish a step-down in impedance with either:

It's easy to see how this works on a Smith chart: if we start at 1000 ohms (the green dot) then there are two ways we can get to 50 ohms (the center): 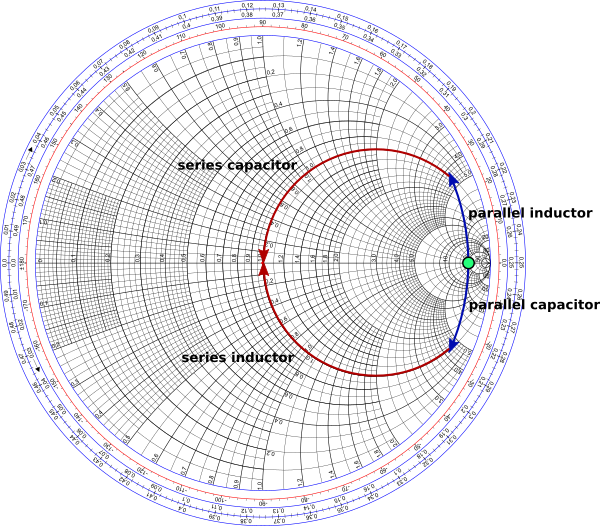 Additionally, making the antenna a little too long, or a little too short, will introduce a reactive component to the feedpoint impedance. So it very well may be that a clever antenna designer can use this to take place of one of the components, and then achieve an acceptable match with just one other component.

Your posting is a good reminder how prevalent end-fed half-wave (EFHW) dipoles are in the commercial antenna biz. The marine VHF antenna industry seems to be the most obvious of the bunch given the need for an antenna to function "well" without benefit of a conductive structure to mount upon.

My ham VHF/UHF mobile antenna is another EFHW example where measurements confirm improvement over its predecessor.

Looking into the various EFHW offerings reveals an exemplar matching transformer at the base that looks something like this... 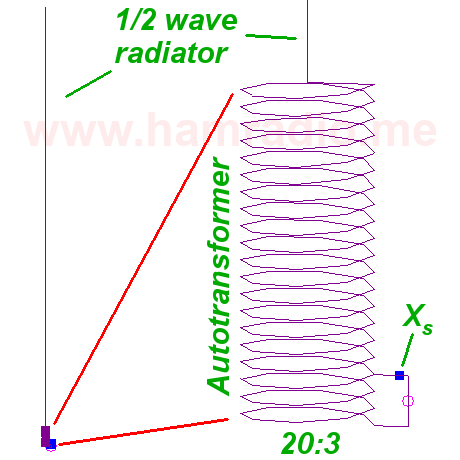 More details available in this article. The above operates well, in simulation, without any need of the oft mentioned counterpoise, etc. Measurements of an HF analog to the above reinforce the ability of an EFHW to operate independent of additional conductors albeit with a bit of loss in the slightly different transformer structure. 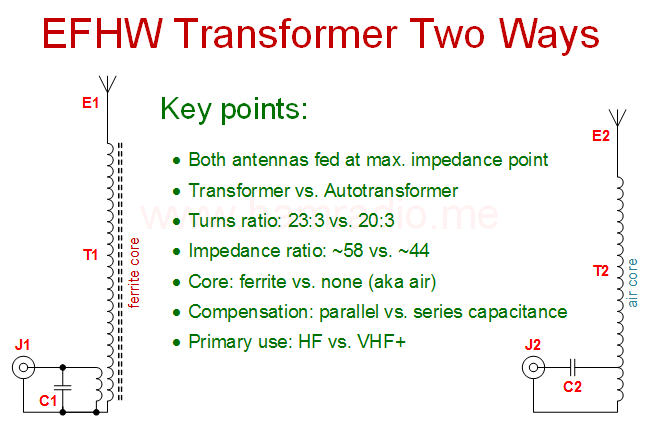 However, feedlines are the norm so I am exploring the effects there as well.

The following graph details the behavior of the VHF/UHF mobile EFHW above against varying lengths of feedline with a grounded end/radio. The frequency is 146 MHz. 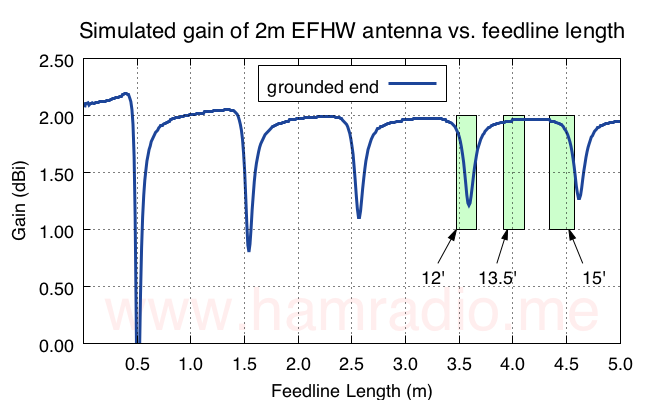 Clearly there are certain lengths one should avoid lest we rob energy from the antenna, but the good news is most lengths seem to play well enough. One can only wonder if the unusually specific length of 13.5 feet was chosen by the maker of my mobile antenna to precisely avoid certain lengths that will entice current from the antenna down the feedline. More detail in the article. This assertion is pure conjecture on my part, but I do wonder if the stock feedline lengths of the marine VHF mobile antennas are also of some specific and peculiar length.

In summary, the longevity of the EFHW design in the world of radio, especially VHF marine, gives comfort the manufacturers know what they are doing and the notion feeding a half-wave dipole from the end = NBD.

Not the answer you're looking for? Browse other questions tagged antenna vhf vertical-antenna or ask your own question.

2
What are the dos and don'ts when it comes to retractable antennae for HTs?
3
Unexpected Resonance - Dual-Band Dipole
3
Are chokes necessary for VHF and higher frequencies?
5
Tiger Tail + capacitive coupling... what's the interaction?
2
How to tune a hamwhip-type mobile HF antenna?
2
Could 8' Marine whip antennas operate on much higher frequencies?
3
Slot antenna for 2 meter mobile
3
What VHF & UHF frequencies are important during an emergency?
2
What Are the Properties of 43' Vertical Monopoles Used as Multiband Radiators?
1
Yagi performing far worse than a dipole