Is there good antenna for 160m Band?

I want a low band (under 40m) antenna. Low band antennas is small in Japan. So I have to make it. Is there the antenna that it is small, and production is easy?

The cheapest solution for the 160m band is probably a magnetic loop antenna, but do be aware that these antennas are optimised for small space and low cost, and NOT for performance.

A magnetic loop is an extremely high-Q antenna with a very tight bandwidth (think ~5kHz on the 160m band), but they are tunable. The gain of such an antenna will be anything from 0dBi to -20dBi (that is to say they are not very efficient).

However, it will allow you to get on the air.

(The usual warnings about the high voltages present on a magnetic loop antenna apply here, especially if you put any power into it! Do not install one where people can get close to it while you are transmitting.)

An example of a magnetic loop antenna is here.

You can modify your vertical to work on 160m. Small antennas are always a compromise in performance, but they do work.

You might research mobile antennas, intended for operation from a vehicle. These have similar restrictions on size, and so they usually use two methods, or both in combination, to make the antenna appear longer electrically than it is physically.

These come in a lot of styles, but the idea is to put spokes or something similar at the top of the antenna to increase the capacitance to ground at the tip of the antenna.

Here's an example from K0BG: 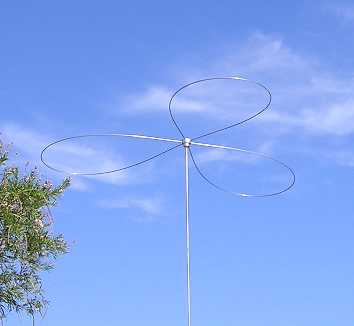 There are all kinds of variations, but anything that makes the antenna thicker accomplishes the same thing. Increasing the thickness at the top has more effect than increasing it at the bottom. See the T-antenna for an antenna where the capacitance hat is most of the antenna.

As you might guess from duality, it's possible to electrically lengthen an antenna (and thus, make it physically smaller), with inductance also. This is accomplished by putting an inductance somewhere along the length of the antenna. 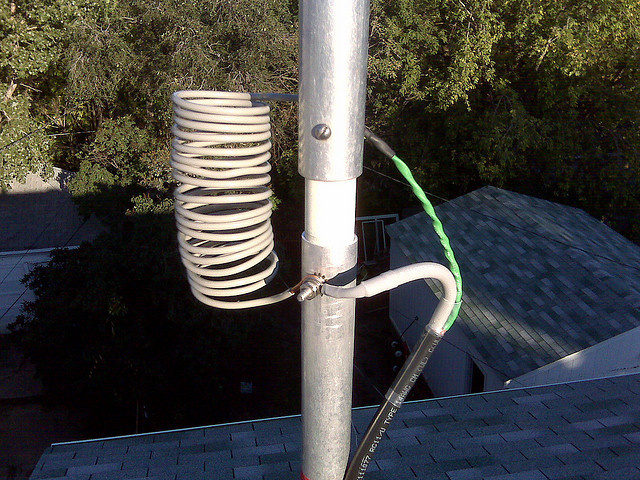 So as usual, placement and sizing of the loading coil is a compromise between size and performance. A lot of designs end up putting the coil somewhere around the middle of the antenna.

These aren't the only options

There are a lot of ways to make antennas and this is just one. As Scott Earle says, a magnetic loop antenna is an equally valid solution. People do all sorts of things: just about any conductor can be made into an antenna. People have used rain gutters, metal fences, metal roofs, or just random wires strung around wherever they can fit them. If you can match your radio's impedance, and keep losses low, it will work as an antenna!

Not the answer you're looking for? Browse other questions tagged antenna hf .

16
What bands and modes will give me voice at 3,000 miles?
9
Is there a simple, DIY, antenna suitable for HF receive only?
8
How far does an antenna need to be from metal to avoid problems?
4
Antenna suggestions for 160m band in smallish yard?
7
Antenna options for a 10x20m property with a large metal roof?
2
Modelling a "fan dipole" or "fan inverted vee" using EZNEC - unexpected result
1
Troubleshooting 5BTV antenna
1
Antenna Tuner Range
1
Common-mode choke (CMC) hurting my SWR. Live with it? Drop the choke?
3
Antenna options for a small urban garden