I've found all sorts of info concerning digital modes, sound samples, spectrum samples, but nobody ever cites what speed a given digital mode can reach.

Could anyone tell me more about that, or point me somewhere where I can find this kind of info, possibly in terms of kbps?

Also, what could be the maximum achievable transfer rate on short waves, specifically?

Edit: I thought that given the premises in first paragraph, it was clear that the heart of the question was about knowing the actually achievable transfer limits using known and used modes, not just understanding theoretical limits... (which is still a precious contribute though). Since it seems this did not come off so clear to some people, so I'm specifying it here and in title too.

8VSB, as used ATSC digital television, has a gross bit rate of 32 Mbit/s in a 6 MHz channel.

These are just two examples of ubiquitous digital modes which achieve high bit rates. There are undoubtedly modes used in scientific, military, and experimental applications which are orders of magnitude faster.

There is no upper physical limit besides that provided by the Shannon-Hartley theorem. As long as I can do any of:

then I can cram more bits into the æther. The reason it's not done in practice is that at some point there ceases to be a need (do most people have a need for Wi-Fi that's faster than their wired network?) or it becomes more economically feasible to run a wire.

You are looking for the Shannon-Hartley theorem. Borrowing Wikipedia's summary, because it's better than what I can come up with:

In information theory, the Shannon–Hartley theorem tells the maximum rate at which information can be transmitted over a communications channel of a specified bandwidth in the presence of noise.

The Shannon-Hartley theorem states that the theoretical maximum bandwidth of a communications channel can be stated as:

where $C$ is the channel capacity in bits per second, $B$ is the bandwidth of the channel in Hz, $S$ is the average received signal power over the bandwidth, $N$ is the average noise power received over the bandwidth, and $S$ and $N$ are in the same unit (here, watts, or a multiple thereof). Notice that no communications channel in practice (not even a crystal-clear FM transmission or studio CD recording) is completely free of noise, so you will always have a $N > 0$. The theorem does not state how to achieve this channel capacity.

It follows from this that if you know the bandwidth, the signal strength received and the noise level, you can compute the maximum theoretical data rate. Transmission frequency does not enter into the picture, although it could place a practical limit on the achievable transmission bandwidth because antennas for lower frequencies tend to be more narrow-band due to employing various forms of matching networks which are not needed when antenna sizes are a considerable fraction of a full-sized antenna for the transmission frequency range employed.

Note that this allows you to compute the maximum theoretical data rate at which transmission is somehow possible practically without errors. This data rate will not always be achievable in practice, and in fact a lot of transmission mode research has gone into getting as close to the theoretical maximum data rate as possible. A transmission actually at the Shannon-Hartley limit would most likely look like white noise across the transmission bandwidth unless you know what to look for; compare ultra-wideband, or the signals used by late-generation dial-up telephone modems.

Since a large factor in the equation is the received signal-to-noise (S/N) ratio, you can increase the achievable transmission rate within a given bandwidth "simply" by increasing transmitter output power, or antenna gain. Conversely, in situations where bandwidth is extremely limited, such as on 136 kHz, the transmission bandwidth is reduced by reducing the data rate. In situations where signal is hard to come by, such as in communication with faraway space probes or again on 136 kHz, the data rate is reduced in order to match the available S/N ratio.

Wikipedia has several examples applying the theorem that you may be interested in.

For what it's worth, I made a graph of a token selection of amateur digital modes with bandwidth vs. frequency (as wavelength) to provide a rough sense of the digital scene. 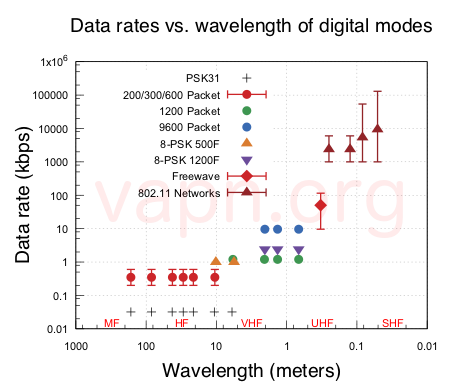 This came from our feasibility study for a new packet system in the Virginia area.

It really is a function of the bandwidth of the signal which is driven by the speed. Lower-speed, lower-bandwidth signals take up "less space" on the air and are on HF while higher-speed, wider signals are on VHF and higher.

Lower-speed modes also tend to be more resilient in the face of varying band conditions, as found on HF. VHF and higher tend to be more stable but much more local as well.

This is a great resource: http://wb8nut.com/digital/

I thought that given the premises in first paragraph, it was clear that the heart of the question was about knowing the actually achievable transfer limits using known and used modes, not just understanding theoretical limits... (which is still a precious contribute though).

I believe the question is a bit "wide" to answer really... you would need to ask the question in reference to which band you use, and which bandwidth you like to use, then you can find protocols to use, or even write your own...

I often thought about increasing bandwidth of PSK by using multiple PSK in parallel... and I actually found someone who implemented this already. Although I forgot the link, I am sure you can search for it.

Basically the higher the baud rate the greater the frequency bandwidth required. The degree of shift of the FSK signal affects the required bandwidth as well. In practical terms, 300 bd is the norm for HF, 1200 bd is the norm for VHF, 9600 baud on UHF not so common but is used with satellites and there is talk about 19kbd as well but not very common. It's all about the bandwidth allowed by the spectrum administrators. Generally they don't like you using more than 5kHz on voice frequencies on HAM bands. A TV Channel is 7 MHz wide.

Not the answer you're looking for? Browse other questions tagged digital-modes or ask your own question.

13
What is the role of digital data modes in emergency communications?
6
Are there any commonly used digital modes that work with an FM transceiver?

// TODO sg: TMP solution until we are confident in our current implementation of async imports // once we are, we can move the if into the js entry file and dynamically load the mark obsolete module