A radio receiver needs $1 \textrm{ nW}/\textrm{m}^2$ of power density function, how far away from a 1-watt point source will it continue to work?

So we have a point source, so it has no gain and radiates evenly in all directions. The result of that is that our waves will look like a sphere. Then we will have the receiver antenna into which those waves will impact. 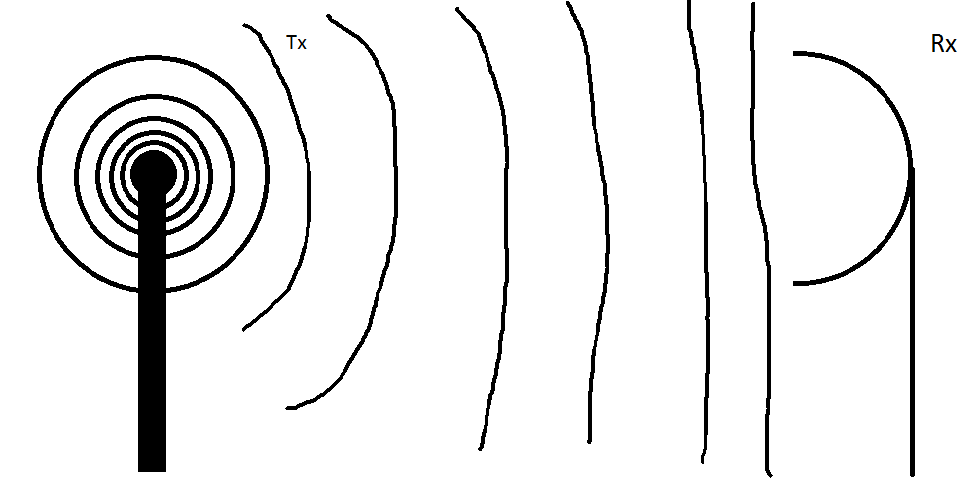 That antenna has its own effective aperture (in the illustration, I used parabolic antenna, because the effect is most obvious with it), which is the area into which the waves from the transmitter impact. The part that impacts the Rx antenna will be received. In this problem, we don't have specifics of the Rx antenna, but we are given density of the power at the needed distance.

5
How does power received by a dipole relate to electric field intensity?
3
Measuring energy density of 2.4 GHz and 5.0 GHz signals
1
Max legal power with nearly zero BW
5
How to find or derive the maximum safe input power to a receiver?
2
Is my low-power VHF transmitter dangerous?
0
Can timing information be used to compress data for LoRa transmission?
1
How to measure the power emitted from an HF antenna in near-field WPT?
1
How does the Maximum Power Transfer Theorem relate to RF power amplifiers?
1
Power vs. Bandwidth
5
Acceptable RF radiation exposure to electronic equipment