I've been fighting to get chirp working with my father's baofeng radios. The only computer that he has access to has Win 7 installed. The manufacturer drivers won't work with win7. I tried using the profilic drivers (did the whole install, etc.) and haven't had any success.

Chirp is giving the following error message: could not open port : [Error 3] The system cannot find the path specified.

Any help is appreciated.

Drivers are not required for the radio, but for the USB cable, as it has to provide a serial port via USB.

A long workaround could be:

I'm saying this because in my case it worked right away on Linux without any problem.

It's a Windows tool for replacing installed drivers with generics compatible with common devices. If the baofeng cable is just be a serial-USB adapter, it might work.

Also, I bought a cable from Amazon that was DOA. Most are cheaply manufactured, it might just be a bad cable.

I know this is an old question, but I recently had to setup Chirp again on a new computer and have long since lost the driver CD that came with my cable... thus I was having the same problem. The issue is that it's not really a USB cable per say. What your computer is doing is emulating an analog COM port through the USB cable, and it has to have special instructions (i.e. software drivers) that tell the hardware (the USB port) how to do that.

I solved it by going directly to the Baofeng website driver page. They only have one driver installation for Windows, and although I am using Windows 10 and you asked for Windows 7, they have this note:

What you will need to know is if your dad's computer is running off of 32 bit or 64 bit software. Your computer will not run the opposite type. Also, make sure you download the setup executable file (link on the righthand side) and not the link under the "Processor Architecture" table, as that file is really just the source code for the drivers. I doubt you want to compile the drivers yourself!

Once I installed the drivers, I just restarted Chirp and the USB appeared as a COM port when I tried to export to the radio. 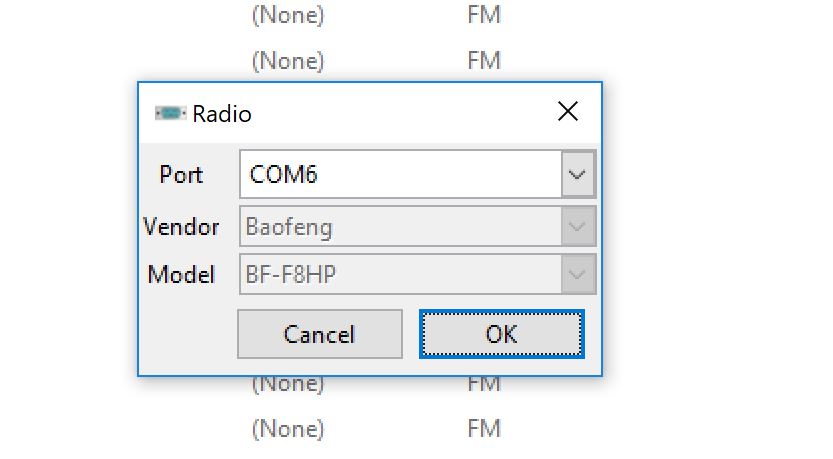 6
How to make a PTT button for Baofeng UV-5R
5
BF-F8HP: "Radio did not respond" when trying to use CHIRP
5
Can I use CHIRP for programming a Baofeng DM-5R?
0
How can I determine the possible damages of transmission with detached antenna in portable ham radios?
0
Baofeng UV-82 and DM-860 drivers Windows 7
3
BF-F8HP radios do not receive on 2m unless menu is open
0
Baofeng UV-9G keypad functions