I don't really get it. How is it possible to just send upper or lower side of a band (SSB USB/LSB):

And how is it possible to send anything without the carrier wave!

If I have misunderstood anything I am sorry because I am new to this and would like a answer.

It looks like you are confused about what these graphs represent. Here's the diagram you used in the question:

Probably, this diagram is intended to be interpreted with the horizontal axis being time, and the vertical axis representing voltage or current.

Using that same representation, then SSB looks like this:

In fact, they all mostly look the same. Why? In these images, we can only see about 5 cycles of the carrier. While the carrier is modulated somehow, the highest frequencies in the baseband signal (your voice) are usually much lower than the carrier frequency. So although the amplitude or frequency may be changing, we can't see any significant changes over such a short span of time.

These images, because the X axis represents time, are said to be time domain representations.

However, one thing we know from Fourier analysis is that we can also represent any periodic signal in the frequency domain. We can represent that graphically by making the Y axis frequency instead of time.

To illustrate, we can look at a square wave in the time domain ($f$), and see how it can be represented in the frequency domain ($\hat f$):

We don't usually use square waves in radio communications because they have power spread over a wide range of frequencies. A square wave at 1 MHz also has energy at all the odd harmonics, 3 MHz, 5 MHz, 7 MHz, and so on. This would cause a lot of interference, since each station is typically allocated just a small channel in which to transmit. Broadcast FM, for example, is allocated a channel 200 kHz wide, and all their transmitted power has to fit in that. For example, from 89.7 MHz to 89.9 MHz.

Consequently, most transmissions look more or less like sine waves, since a sine wave has all its power at exactly one frequency. Then we vary the amplitude or frequency of this wave to carry information, but at a relatively slow rate compared to the frequency of the carrier.

Once you understand the concept of looking at signals not as a function of time, but as a function of frequency, then it is easy to say what SSB looks like: it looks just like the baseband signal (your voice), but shifted up in frequency to wherever the transmitter is tuned.

As an example, a whistle is approximately a pure sine wave. So if you whistle at 1kHz into the microphone, and the transmitter is tuned to 1MHz, then what you will see transmitted is a pure sine wave at 1.001 MHz (1 MHz + 1 kHz). If you make no sound at all, then nothing is transmitted.

If you get two people whistling at different frequencies, say 1 kHz and 2 kHz, then what you will see is the sum of two sine waves, one at 1.001 MHz and another at 1.002 MHz. Because these two frequencies are so close together, if we view it on any timescale where we can see the individual oscillations of the transmitter, it will just look like a sine wave.

So it doesn't really make much sense to think about what SSB looks like in the time domain, and consequently, most of the graphics you see represent the signal in the frequency domain.

Let's start with voice, just to show what it looks like. Voice doesn't have a "carrier wave". It simply contains the up and down level of the voice. Where the sound wave is 0 is effectively the carrier.

Okay, so how does SSB actually work then? Imagine that the signal contains signals that go both above and below the base value. Let's say you are broadcasting a tone, with amplitude X. The tone will have some signals with value X, and some with value -X, with a sinusoidal wave between the two.

With the figure you showed isn't really what is transmitted in SSB. Rather, it is a rectified sin wave, such that half of it is shown at 0, and the other half shown above. As sound doesn't really change that much over the frequency of sound waves, this is an acceptable way to show the signal. The carrier wave is then the part of the signal at 0. As that isn't really important, just not sending the 0 part of the signal removes a significant part of power that doesn't add much to the signal.

Bottom line, this chart from Wikipedia shows how the various modes work. 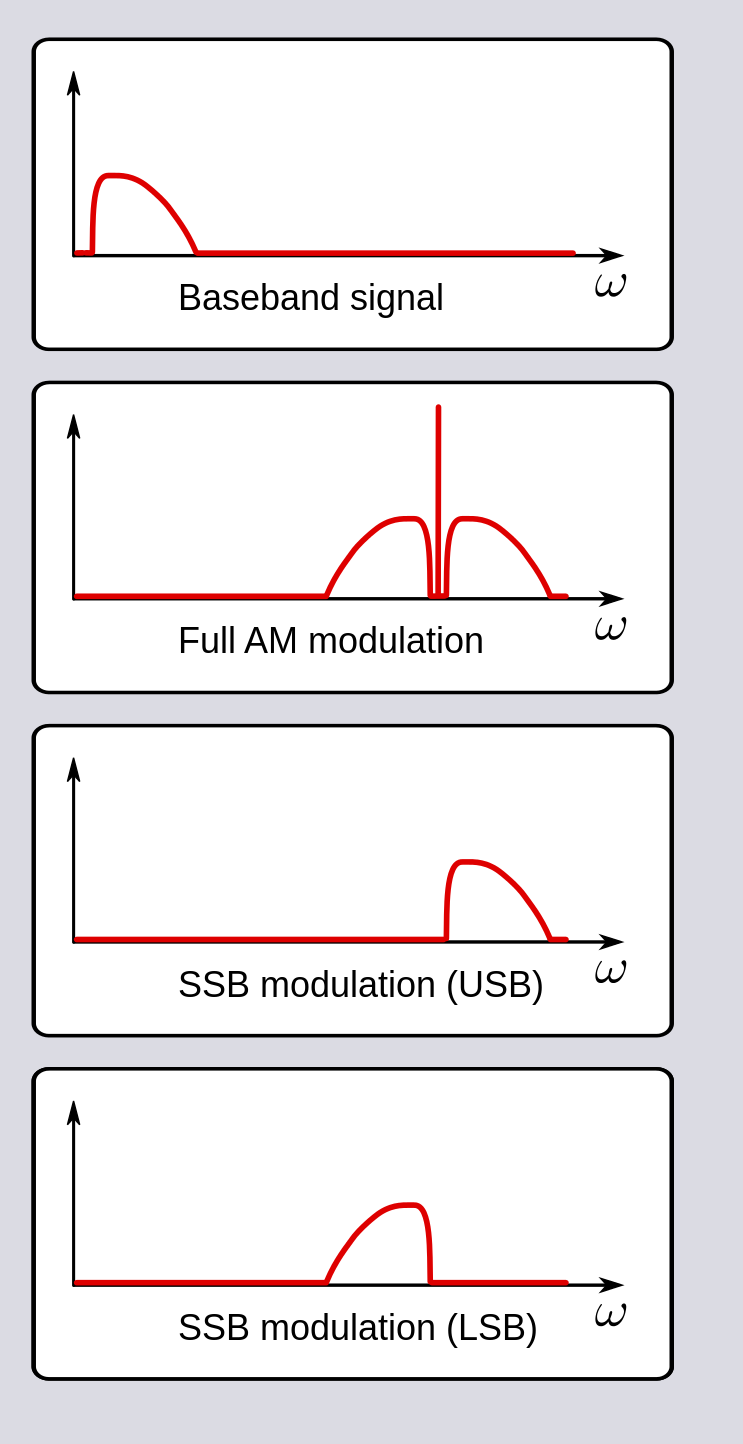 The simple answer is that the baseband (voice) modulates the carrier and the result is 2 BANDS of frequencies added above and below the carrier (carrier +/- the voice). The amplitude (shape seen in typical illustrations) of these waves correspond to the baseband. The higher frequencies (USB) AND the lower frequencies (LSB) BOTH have the same but opposit shape and BOTH contain the SAME informtion (baseband/audio). Separating the upper or lower SIDSEBANDS does NOT remove that information. It is then sent as a narrower (more efficient) band of frequencies (compared to the carrier and BOTH sidebands) and can be demodulated and recover ALL of the baseband (voice) info.

"And how is it possible to send anything without the carrier wave!"

Excellent question. It's not possible!

The picture below shows the oscilloscope image of a "carrier wave." The "carrier" sets the RF transmission frequency.

The picture below shows the oscilloscope image of an SSB signal modulated with two audio tones. This is a common test signal.

The original image you showed is the "envelope" of the modulation only; the "carrier" wave is not included. Note how the shape of your image is the same as the shape of the peaks and valleys in the second picture above.

I created these waveforms using LTSpice, a free circuit simulation program available from Linear Technology. The beauty of this program is that it allows you to simulate "behavioral" voltage and current sources with purely mathematical descriptions; you don't have to implement a circuit with active and passive components.

22
Why do we use LSB below 10 MHz and USB above 10 MHz when operating SSB HF?
4
SSB demodulation
3
Would it be feasible to set up a SSB or AM 2 meter repeater?
16
How does selecting the opposite sideband when receiving CW on HF reduce interference?
4
Is this simple description of SSB correct?
3
In SSB how do receivers calculate the frequency offset without a carrier?
1
SSB Modulation and Differential Signaling
4
SSB filtering in the frequency domain?
1
How to calculate VFO/IFO frequencies?