Why can't VHF / UHF be used with ionosphere reflection?

The ionosphere typically neither reflects nor absorbs waves with VHF or higher frequencies, but passes them through to space. There are no reflections back to the ground, so there is no useful propagation between stations on the ground.

Tropospheric ducting is a different propagation mode which does carry VHF signals well, and is actually sought and used for VHF DX contacts. However, it depends on specific weather conditions that do not occur daily, and so is much less a reliable means of communication than the ionosphere.

Maximum Usable Frequency changes with time of day, season, solar radiation and many other factors.

The best resource I have found for checking the current MUF and other conditions is here... http://www.hamqsl.com/solar.html

As you are probably aware, solar radiation ionizes atoms and molecules in the atmosphere at altitudes of about 50 km or so and above. The densities of free electrons produced vary from between a billion and a trillion electrons per cubic meter, depending on altitude and time of day (see below). 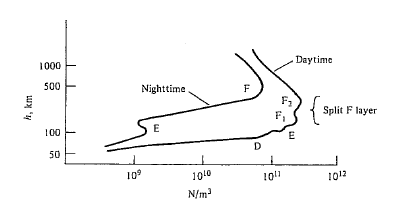 Different regions of ion density are identified with letters (D, E, F), but the boundaries between regions are not that clearly defined.

To a first approximation, the different ion "layers" can be thought of as kinds of reflecting mirrors for RF, but this really isn't an adequate model to describe why different RF wavelengths are reflected differently.

In general, the reflection of an electromagnetic (i.e. RF) wave at any boundary depends on:

A complete description of how the wave gets reflected is provided by the Fresnel equations, which include expressions for the amount of energy reflected by waves that are polarized perpendicular and parallel with respect to the reflecting medium. An example of the Fresnel reflectance (and transmittance) is shown below for a wave traveling in free space and impinging on glass, with a permittivity 1.5 times that of free space: 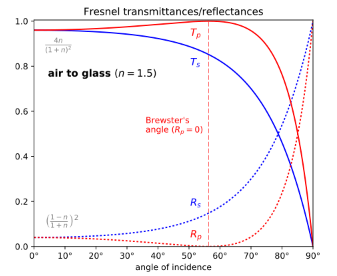 With these models, we can observe a few things:

In RF communications engineering, the plasma frequency is referred to as the critical frequency. There are a number of other benchmark frequencies that are referred to by the ITU:

There are two different types of MUF's that are discussed:

The basic MUF is the highest frequency by which a radio wave can travel via ionospheric propagation alone, independent of power.

Some definitions of MUF are in terms of the the channel being available over some percentage of the month at a specific time (e.g. 90%). A common rule of thumb is to estimate the MUF at about 3 times the critical frequency. 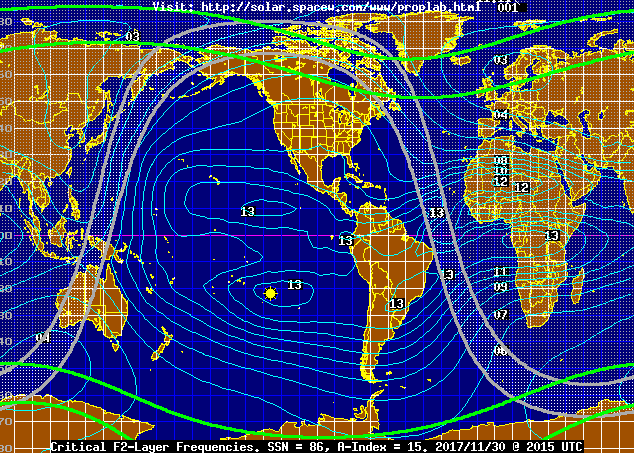 The Lowest Useable Frequency for a specified time period is the lowest frequency that can be used for communication on 90% of the days of the month.

The FOT relates to the availability of a particular geographic path. It is the best working frequency expected to be useable for a specific time (e.g. 2000UTC) for a specified percentage (e.g. 50%) of the days of the month.

Not the answer you're looking for? Browse other questions tagged propagation uhf vhf theory .

6
Effect of night on VHF/UHF propagation
9
Can there be (long range) propagation of HF from satellites?
5
Incoming angle of radio signal reflected off of ionosphere
5
Troposcatter: really all that bad?
3
Why is VHF better than UHF in this situation?
1
Is there any way in which elevation *does* affect medium frequency (AM radio) transmissions?
5
Using shortwave communication, how difficult is it to transmit messages from the UK to the US?
0
Send on-off radio signal 5,000km
0
Radio Waves propagation (Intuitive Understanding of Wave propagation)
3
VHF Balancing, necessary? Methods?