Should I ground my radio to the chassis or battery for a mobile install?

From what I've seen, there are generally two ways to power a mobile radio:

I know that antennas should be grounded to the chassis, but what about the radio itself? There must be some electrical difference, but I'm not sure what it is and I've seen a lot of contradictory information.

There are two reasons for the advice to run direct to the battery:

Neither of these is a reason to wire specifically to the battery per se, only to avoid using a completely different conductor (the chassis). According to K0BG.com, a site dedicated to mobile amateur radio, some modern cars have electrical systems in which you shouldn't wire direct to the battery terminals, for example:

The use of these sophisticated subsystems have necessitated the relocation of the ELD to the negative lead of the SLI battery as shown at right (surrounding the battery ground lead), and below right (incorporated in the battery negative connector). The photos are of a 2014 Nissan Titan, and 2013 Honda Accord respectively, but other makes are similar such as Ford's F150 shown below at left.

Ford's Battery Monitoring SystemIt should be obvious that transceiver ground connections cannot be made directly to the battery as recommended in the past, as doing so would bypass the BMS. Thus in the examples shown, the negative lead would be attached to the battery's chassis connection point (Titan), or on the ground side of the ELD (Honda).

The article goes on to say, after discussing other possible complications:

The bottom line here is, if in doubt, read your Service Manual, or contact your dealer's service department before undertaking your installation.

Have a 2018 Subaru Forester Has a heavy 2nd wire from negative batter terminal going to an ELD sensor...the wire from the sensor to the chassis ground is enclosed within aluminum tubing and cannot be easily accessed. The head tech for Subaru in my location went to my car opened the hood and pointed to the main chassis ground bolt between the fuse box and the shock mount...good enough for me.. 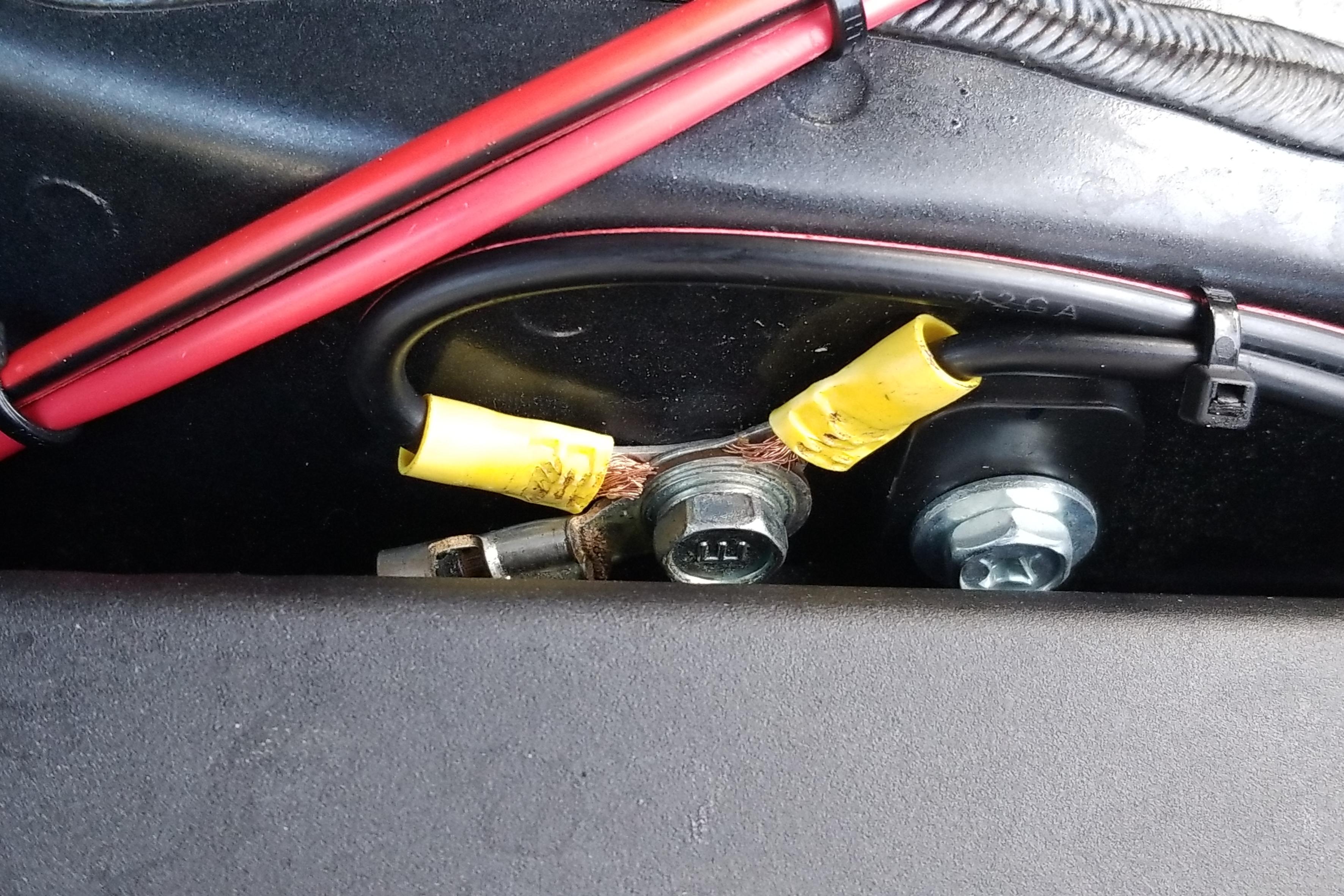 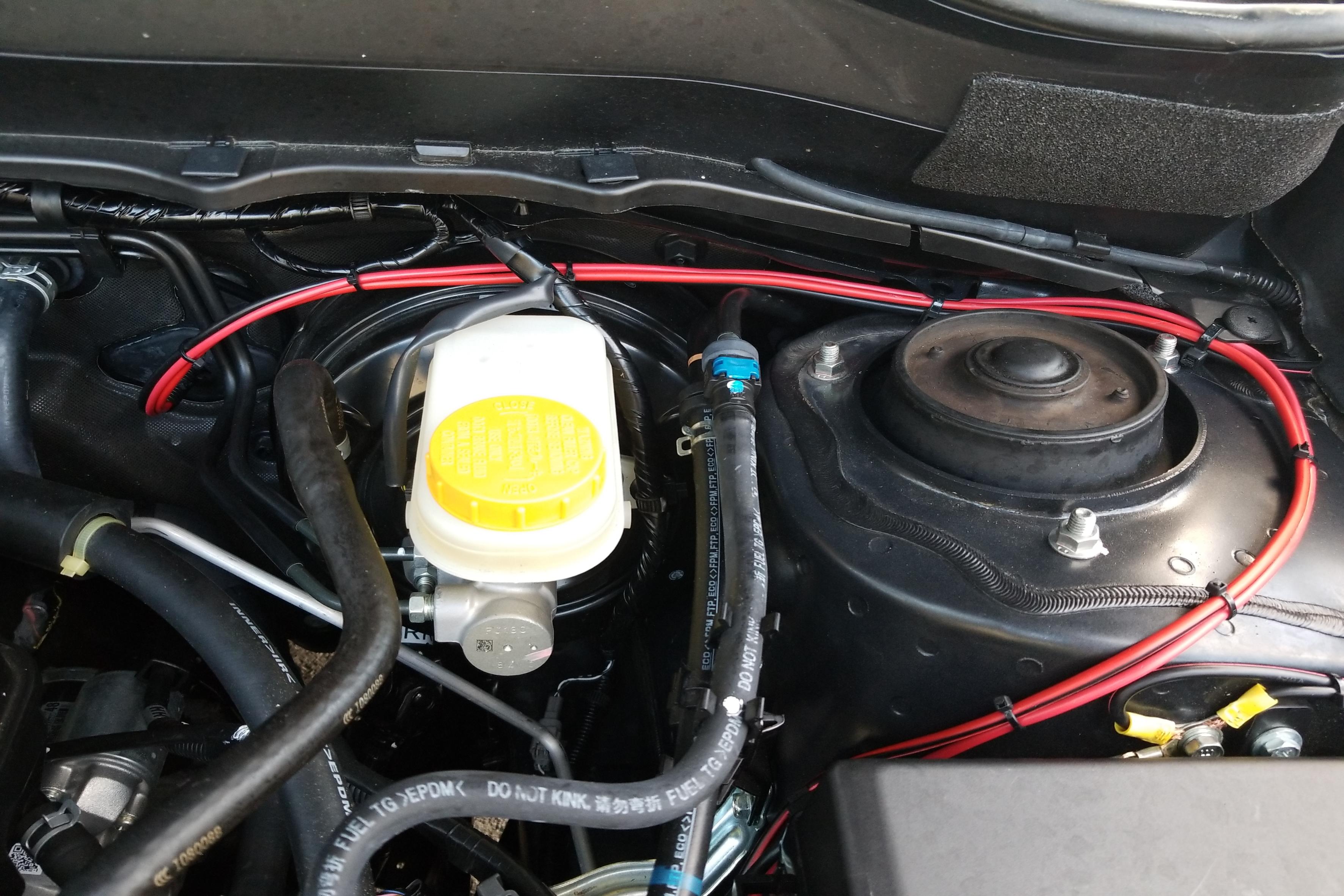 Very simple. Never connect Negative directly to battery and never fuse the Negative as doing so is extremely dangerous. Doing so puts your radio in Parallel with the Battery Bonding Strap to the chassis. That means a portion of all the automobile electronics systems current is flowing through your radio including the Starter. Secondly will bypass the vehicle HFE current sensor in the vehicle battery bonding jumper.

If anything were to happen to the vehicle bonding jumper, means your radio is now the bonding jumper. Put your key in the ignition, all the lights, bells, and whistles come as normal. Turn the key to crank your engine, and your car fills with smoke and fire. All that starter current flowed right down the Radio Negative Battery lead, through radio chassis and circuitry, and out the coax shield completing the circuit burning it all up along the way.

Not only is it dangerous, with a portion of all vehicle current flowing through you radio is called Common Mode Noise, Can be bad enough to render your radio useless.

The proper termination points for Positive and Ground. For Positive directly to the Battery Term post with a fuse as close as possible to battery.

For the Ground aka negative circuit conductor, locate the factory Battery Bonding Jumper to chassis. Cannot miss it, it is the cable on the Battery Negative Term Post. Typically bonded to Wheel Well, or Fire Wall. Remove factory bolt. Clean any paint, grease, dirt off and make sure you have bright shinny metal. Use an anti-oxidant. Place your radio negative cable Ring Terminal on TOP, not below Factory Rind Terminal. Replace factory bolt and Locking hardware. Same effect as directly to battery post with respect to low voltage loss, but takes your radio out of a Nasty Nasty Ground Loop. Anyone tells you different, tell them to pound rocks, they do not know what they are talking about. 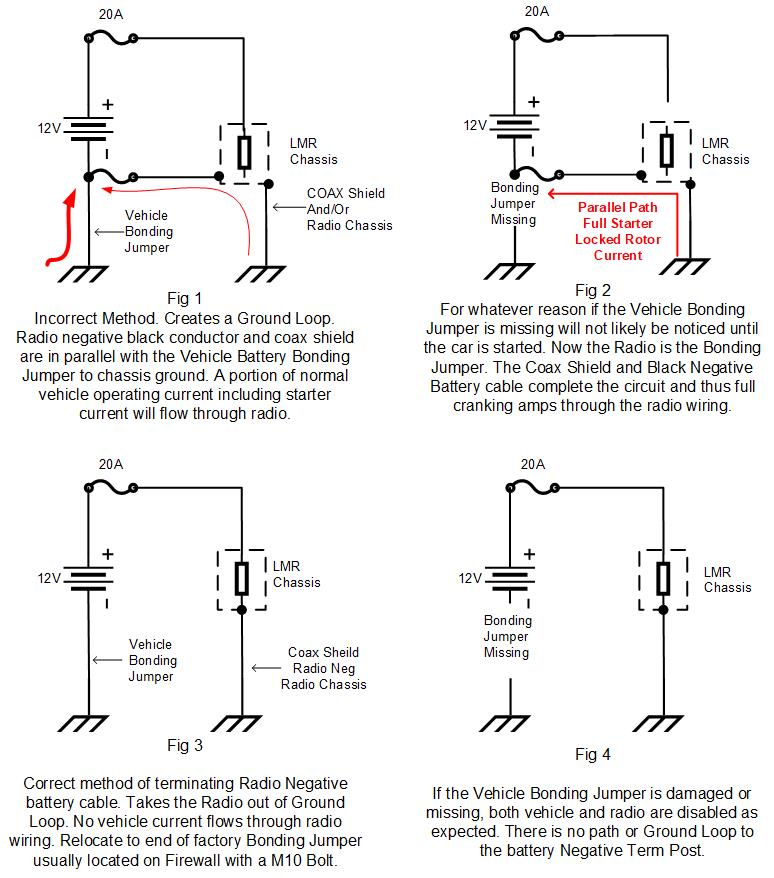 With respect to the fuse in the negative questions is straightforward. It protects nothing. Remove the fuse, and the radio still operates because it is using the coax shield for DC power. The fuse that protects both positive and negative wires is the positive fuse. It is a Grounded system where one circuit conductor is bonded to Ground like a frame of a vehicle. In an AC system, the grounded circuit conductor is Neutral.

The whole point of a Grounded System is to facilitate simple, cost-efficient, and effective over-current protection of the circuit conductors. Only requires the ungrounded circuit conductors to have a breaker or fuse located at the feed point.

A Floating System like batteries or an AC Delta circuit where no circuit conductors are bonded to ground requires a fuse or breaker on all ungrounded circuit conductors, plus ground fault detection in the event one of the circuit conductors is grounded. If you FLOAT a battery system would require both positive and negative conductors to have an over-current protection device installed.

Over Current Protection Devices (OCPD's) are not used to protect the load utilization equipment like your radios. Fuses and breakers are there to protect the wire connected to the load side terminal of the OCPD. Nothing else. Anything beyond that is collateral. All electrical codes have minimum size wire requirements based on the breaker Ampere rating. For example, a 20-amp OCPD requires a minimum of 12 AWG or larger wire. The insulation on a 12 AWG wire fed with a 20-amp breaker will never experience thermal damage to the wire's insulation preventing an electrical short or fire as a result. Electrical codes protect the power wiring only. What you plug in is an Equipment Code issue equipment manufacturers deal with.

Electrical codes do not permit grounded circuit conductors to be switched, or have fuses and switches inserted. They must be solidly bonded and never interrupted. The reason is very simple. For sake of argument imagine this. Disconnect the radio coax from your radio, and assume your installation did not use any chassis-to-chassis bonding and is electrically isolated and floating. You slid the radio under the seat with carpet and rubber backing. Now pull the negative fuse while leaving the positive connected normally. Take a DMM and you will read 12 volts on the radio chassis and negative wire where you pulled the fuse. It is looking for a return path to the battery. The radio chassis is HOT.

Granted 12-volts is not a shocking experience. Now repeat the experiment with a higher voltage, say 120 volts. Real simple to do using an old fashion incandescent hand test lamp like you would hang under the hood of a car while working; a test plug for an AC wall socket; and one test jumper with alligator clips. Use the test plug and jumper to connect Line to the lamp power plug line stab. Leave Neutral circuit open(DC negative equivalent). Turn the lamp switch on. The light will not come on because Neutral is open. Now wet both index fingers on each hand. Take one wet finger and place it on ground, and the other to the lamp power plug neutral stab and watch the light come on and lights you up.

Now imagine Mr Sparky, your friendly Electrician working in Sammy Hammy's house with a low voltage problem in the shack. Mr Sparky checks your AC power at the wall receptacle. Like all Mr. Sparky's know, Neutral is grounded and safe to touch. While checking your AC wall circuit, he jumps and cusses because he got bit with 120-VAC touching the Neutral terminal. Checks the wiring and finds Sammy did some wiring work and put the AC wall receptacle on a wall switch switching the Neutral rather than Line. Mr. Sparky finds two problems. Undersized wire causing the voltage sag problem and improperly wired wall switch. He knows why electrical codes do not allow the grounded circuit conductor to be interrupted and must be solidly bonded.

Connect your radio's negative power wire to the vehicle chassis as close to the radio as possible using a hard point like a seat bolt or ground terminals provided by the auto manufacture. They are under seats for things like Inverters, high power audio amps, heated/power seats, and accessories. Do not roll up the slack on positive, negative, and coax. Keep them as short as possible. Otherwise adds voltage loss and noise. Throw the second fuse in the parts bin.

Never ever connect your radio or amp directly to the vehicle battery. You always ground to body of the vehicle. Positive can go to battery but best to follow manufacturer on location. If your new radio comes with a fuse on the ground, cut it off so as to only fuse the positive lead.

1
Adding radio to the car

6
How do I power my radio in a vehicle mobile install?
6
What are some good options for covert dual band vehicle antennas?
9
Grounding VHF base station antenna
4
why do some radios have two fuses in the power leads
5
How can I counter DC-DC inverter noise / ground noise in an electric-vehicle mobile setup?
1
MIC microphone ground vs common (PTT, chassis etc) ground
0
6 meter mobile antenna grounding
2
Can Yaesu FT-65 be charged from a 12 VDC automotive accessory outlet?
4
Coax braid acting as power supply ground between radio and amplifier connected to the same supply, is this a problem?
1
Ignition Static on 2m mobile but not 70cm