What is the process of stub impedance matching and what are the elements included in the calculations relevant to it?

impedance transmission-line
Share
Improve this question
edited May 13 '15 at 17:56

"Stubs" are sections of transmission line which are usually less than a half-wavelength long and either shorted or open on one end.

The two connections on the other end look like two terminals on a lumped impedance which can be either an inductor or a capacitor, depending on the length of the stub.

For a short-circuited stub, the impedance is:

An open-circuited stub is the same but negative:

It is thus possible to construct a stub which has the same effect as any reactive component at a particular frequency. A distinct advantage is that stubs are in some cases more easily fabricated than capacitors or inductors, for example at microwave frequencies where transmission lines are easily fabricated on PCBs. 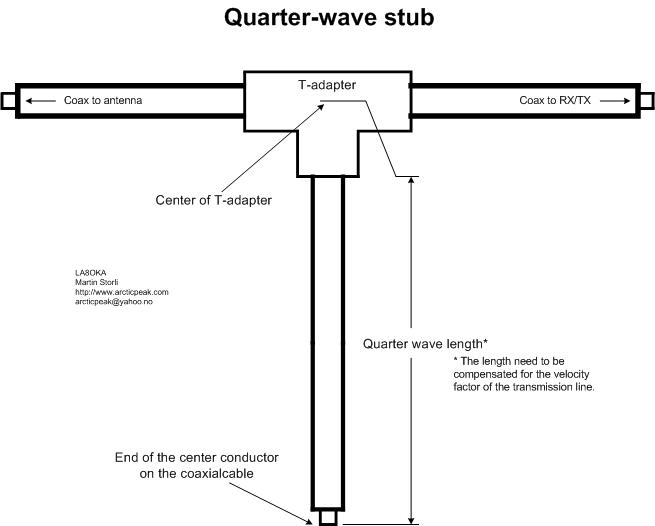 The input impedance Zin of a length of coax depends on four factors: 1) its characteristic impedance, Z0, which is independent of the RF frequency; 2) its load impedance, Zload and 3) its length in terms of wavelength, the latter both at the fourth factor: the frequency of the applied RF. Note in all this that the wavelengths are in terms of the reduced velocity of RF in the feeder. The formula relating these is complex, but one simple case is often used, however note that this formula applies only to quarter wavelength lines:

Basic principle is that, since a 1/4 wave length of transmission line obeys this formula, it is useful in two different ways.

The first is a quarter wave stub. This is connected across the feeder line, and and acts as a filter, at the frequency it is a 1/4 wavelength of. There are two cases: the first is if the far end, is an open circuit, Zload is infinite, then Zin is zero, and we have a notch filter at that frequency.

I have not seen any mention of a use for the second case, a short circuited stub: its input impedance would be infinite, with no effect on the transmission around its 1/4 wavelength frequency.

The second use is a quarter wave matching transformer. 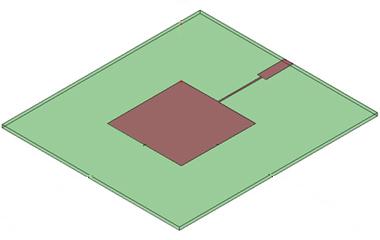 Using the formula we see that we can match Zin to Zload by a line with a suitable Z0. This has applications when we want to match a fixed load impedance, e.g. the input impedance of an antenna, to a fixed feeder impedance, say that of a transmission line, by inserting into the line a quarter wavelength of a different transmission line with a specially chosen characteristic impedance. That is, by having a mismatch at both ends, you choose a line impedance so that the two end impedances are the ones in your circuit. This is difficult with coax because there are only a few fixed values of Z0 to choose from. It can be more easily be applied to parallel lines, because their impedance can be changed by altering the diameter and spacing, and in microwave applications where the line is in the copper of a double sided printed circuit. For example, in the figure, a short 50 Ohm microstrip transmission line is matched to a square patch antenna (impedance typically 200 Ohms or more) via the thinner 1/4 wavelength microstrip line with a Z0 chosen to make the match.

Not the answer you're looking for? Browse other questions tagged impedance transmission-line or ask your own question.

4
What impedance matching do I need between my 300Ω feedline and Softrock receiver?
6
Impedance Matching Different Feedlines
4
Coaxial Folded Dipole Antenna Matching Impedance
2
Do stub matching techniques still produce some loss?
7
What exactly does an unun do to the impedance of a transmission line?
0
CC1125 reference design matching network using Smith chart
1
Rudementary Impedance measurements for VLF antenna system
5
How to calculate single-stub match (general case)?
3
How do transmission lines affect the impedance of some arbitrary load?