Does iron ore in the ground affect my signal?

Mineral content in the ground varies from one place to another. I've visited places where the ground & waters were an orange-red shade from the high iron content; not good for trees either.

This post on eHam.net, seems to indicate there may be propagation issues with high iron-ore content in the soil/environs

The iron content of the under lying iron deposits were not conducive for good communications. Many dead spots. The local iron deposits are on the high ground. I experienced hf and vhf deficiencies.

The same was echoed elsewhere (pdf) about RF propagation in the Adirondack Upland, and also in the context of WWII Market Garden, and the WWII Philippines campaigns.

Anyway, say in the future I want to operate from a location where the ground is rich in iron ore.

If anything, living in an area with high metal deposits near to the ground will improve your conditions by improving the conductivity of your ground. That said, unless it's very near to the surface and high concentration, I doubt you'd notice any difference.

Note that when we model the ground as an ideal ground plane, anything underground has no impact on the signal at all - it is shielded. Of course our real ground isn't perfect, but metal deposits can only improve that, if they have any effect at all.

Probably not much effect from iron in the ground.

HF communications are very sensitive to the ionosphere and other natural effects. Predictions are difficult, and only give a probability, never a guarantee. Real data are thin on the ground, and you know that the plural of anecdote is not data.

HF propagation happens mostly in the air, and by reflection off the ionosphere. The ground only gets involved at the antenna, and possibly if you are using ground wave propagation. Ground wave is more an MF thing, AM radio etc, above a few MHz it is only good for a few km.

The radiation pattern and efficiency of an antenna are affected by the ground constants, and the low-angle radiation, so important for long range HF, is particularly sensitive. No matter how far the signal will travel, the only ground that counts is the patch around each antenna. The size of the patch varies, but it's generally only some wavelengths in radius. In reasonable ground, all the RF conduction happens in the first few metres, so don't worry about what is being mined far below.

The two ground parameters, conductivity and permittivity, vary widely between locations, but in general, the "richer" the soil, the "better" the ground. So fertile farmland is much better than a desert. This effect is well studied.

The richness of the ground depends on its water content, the geological type of rock etc, and the minerals. Most ground is of course silicon dioxide, sand, which is an insulator. The size of the grains, and the other minerals, are what change its performance.

To study this further, try to investigate the effect of various minerals on the ground permittivity and conductivity. This is where the hard data lies. Stories about good and bad reception, or even careful measurements of "how good the signals are", have too many confounding factors, and are not going to lead to useful conclusions.

Well, I operate daily from an old copper mine - where the main mineral is iron!

The comment about iron oxide are not correct. In places such as here, and where the OP mentions, the ground is highly acidic. Consequently, iron is in the FE2+ (ferric) state, not the FE3+ (ferrous/rust) state. This may or may not affect conductivity. You will have to consult a number of detailed academic papers on that, probably none of which are in the context of RF operations.

When one comes across 'red water' (pH above 4, and so iron in the precipitatable, Fe3+ state), then you know you are likely in an area with lots of different types of mineralisation. Picking out the role of each, and when geological layering and water in and through these is present, is a task that quickly leads to madness!

Are you better off with highly conductive ground under your antenna? Yes! 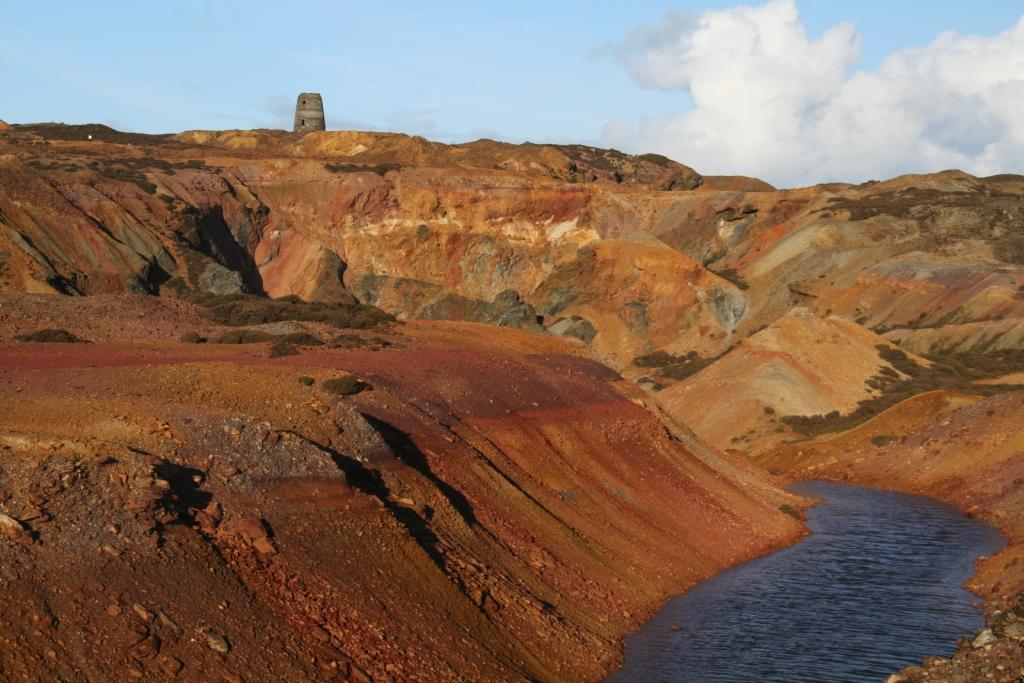 I did find a reference in MCRP 6-22D, Marine Corp Antenna Handbook page 1-10. It talks specifically to ground wave. “At high frequencies, 3 to 30 MHz, the ground’s conductivity is extremely important, especially above 10 MHz where the dielectric constant or conductivity of the Earth’s surface determines how much signal absorption occurs. In general, the signal is strongest at the lower frequencies when the surface over which it travels has a high dielectric constant and conductivity.” I don’t see a case in LOS or sky wave.

I live in the same type of area. At the bottom of a Canon and I think the iron ore is above me in the hills or I am in the middle of it, but I have terrible propagation on 11M and it even spreads out to 15M and 10M. But 11M is far the worse. At times, I can go days with nothing but static, and don't be telling me about the flip flop of the seasons. I am retired and my radio is on from 5 am to 9pm 365 days a year. I know all about the changing times. This is something else.

I think the next thing to look at is one of two things, the geomagnetic storm influence on the iron, and now I am wondering about the churning magma under the Yellowstone Super Volcano. I hear it is becoming more active and closer to the surface this year, and so is my propagation getting worse.

Just my 2 cents worth. But if you do not live in one of these areas, please stop muddying the waters with your guesses. ;)

I have since found some evidence of the Iron Ore culprit here in my little canyon. I have made a short video of what mine looks like and these rocks are laying around here on the ground anywhere there is alluvial gravel on the surface. I suspect they came out of layers above my location. Hopefully, this will add some insight to the problem, and in passing, my propagation has never gotten any better, since last posting.

With respect to the issue of iron ore creating propagation problems, I have noticed the same problem where I live, which has high concentration of iron ore, for cell phone signals and sirus XM satellite reception in my car.

My theory is that, iron being a good conductor, better than air, if the ore is located between the transmitter and receiver, some portion of the signal takes the path of better conductivity, the iron ore, and less signal strength is received at the receiver.

So, assuming the validity of that hypothesis, what to do? Well, I got a signal amplifier for the house. For the car we just tolerate it.

How about driving an iron rod into the ground to pick up the diverted portion of the signal?

11
What would propagation look like on Mars?
5
Does geology affect radio signals?

9
How does the South Atlantic Anomaly affect propagation in the HF bands?
10
Does modulation affect propagation?
2
Does propagation affect magnetic and electric fields equally?
8
Ground influence on 434 MHz radio signal
0
What are the signal loss mechanisms between a ground station antenna and a satellite receiver?
5
Does geology affect radio signals?
1
Is there any way in which elevation *does* affect medium frequency (AM radio) transmissions?
1
Why does signal power drop every night?
4
How do I interpret the FCC ground conductivity map files?
0
why does time of day affect propagation when talking to the other side of the earth?