How should I mount a mobile antenna on a vehicle with a non-conductive body?

I would like to mount a self tuning antenna, ATAS-120, matched with the FT-857D transceiver. I would like to make this pair function on an ARGO 8x8 amphibious vehicle with a polyethylene body.

There is a metal frame the engine and drive-train is attached to and I would run an independent ground from the antenna to the frame. Will this function properly?

I think the question is how the frame will act as a counterpoise. You might consider adding some 450 Ω ladder line, cut to the lengths of the bands of interest, and run them up and down the sides of the argo.

I'm not an argo owner, but I live on a sailboat. What I did is roughly follow the information given on ropeantenna.com about counterpoises.

I've put a DC block between the rudder post and the antenna tuner and this is my ground (to sea water); then from the antenna tuner up along the sides of the boat I've run 450 Ω ladder line up and down each side. My system, a Kenwood 480 with a SGC-230 auto tuner, works well. 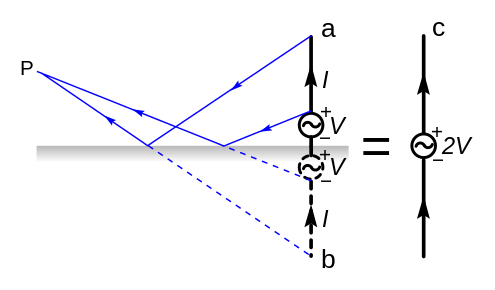 "Monopole and image antenna" by Chetvorno - Own work. Licensed under CC0 via Wikimedia Commons.

If the antenna is mounted on anything other than a plane, then there is no "mirror", so you have no image antenna. Consequently, you no longer have a monopole antenna.

If you don't have a conductive plane available, an alternate solution is to forget the monopole and just make a dipole. This could be two ATAS-120 antennas, each making half of the dipole. If you could figure out some way to mount such an arrangement, it would behave similarly to one ATAS-120 on a ground plane, except it would have twice the feedpoint impedance.

Of course it would also be twice as big, and you'd somehow have to interface to two autotuners. So for practical reasons, this might not be the best approach.

If you take your proposed approach of running a ground lead to the base of the antenna, that might work, but it's important to understand what you are doing. You are essentially making a dipole, with one half being the ATAS-120, and the other half being that ground lead plus the car body at the end of it.

The issue here is that we don't know much about the geometry of this ground lead or the car frame. In theory, you just have a funny shaped dipole, and there's no reason it couldn't be an antenna. But in practice, there are many difficult to answer questions. What will the resulting feedpoint impedance be? Will the autotuner still be able to function effectively? The easiest way to answer this question is to try it and see.

Another approach, if you don't have a conductive roof, is to make one. You can install radials on your roof just as radials are installed in the ground for HF verticals. Run the radials to the edge of the roof, and install as many as you can, I'd say at least 16. The result will look, electrically, very much like the antenna was mounted on a metal body car.

Not the answer you're looking for? Browse other questions tagged antenna mobile vertical-antenna .

6
How do I power my radio in a vehicle mobile install?
9
Has a vehicle magnetic antenna mount ever caused a road accident?
4
Does effective grounding of mobile (vehicle) antenna mounts address common-mode currents?
3
recommended capacity bottom-hat clearance above metal roof
3
How do you keep your vehicle clean with a mobile antenna?
0
6 meter mobile antenna grounding
1
Need antenna for mobile mag-mount LPFM broadcast 88.3 MHz
3
Vertical antenna with feedpoint below ground plane?
1
Sealing connection between mobile antenna and mount