How does an antenna transform impedances along its length? 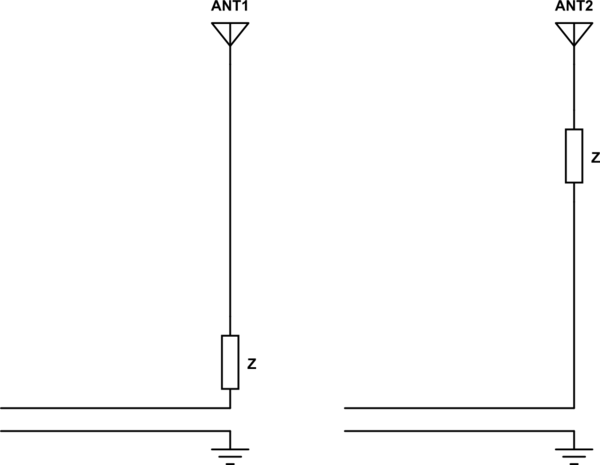 How can we characterize this impedance transformation? Can we put some math to it?

The impedance along the length of the antenna is a function of the standing wave developed on the antenna. If we assume no ground losses and ignore the self capacitance at the tip of the antenna, then the following description can be applied to a monopole antenna <=1/4λ long.

Upon steady state conditions, the input impedance of the antenna establishes the RMS input current (I) at the feed point. The power applied to the antenna is calculated as I2|Z|. It is also known that the pattern of the current on the vertical element of a monopole antenna with an electrical length <= 1/4λ can be modeled as sinusoidal with near zero current at the tip and reaching maximum current at the feed point. The impedance magnitude at any point along the antenna can therefore be approximated as:

where θ is the electrical degrees from the tip, PFP is the transmitter power at the feed point, and IFP is the RMS current at the feed point. Due to real world effects excluded in the opening paragraph, this can only serve as a first approximation.

The insertion of any inductance or capacitance represents another impedance discontinuity along the length of the antenna. As such, it too will generate reflections and attendant phase shifts that alter the impedance of the feed point. The relative phase of the insertion point (for a given component) is the cause of the variation of input impedance as the position is changed. Careful modeling of all of the complex reflection coefficients and positions along the length of the antenna will allow the development of a nearly complete formula of the input impedance of the antenna.

Think of the antenna as a whole as being many inductors in series along its length and along with that many capacitors branching off like a tree (capacitors in the air) going back to the "negative side", so parallel capacitors. The loading coil needs actual current to work with, the further up on the antenna that you mount it, the less current there is and the less effective the coil becomes. A loading coil placed at the tip would do nothing since there is no current left at this point.

To model this, I would use 2 series inductors for the antenna (the center point is where you insert your loading coil) and you have 2 parallel capacitors. Going from connector to tip of antenna it will be inductor capacitor inductor capacitor.

SOME trap and filter designs are fairly insensitive to abuse of input and output impedance, some are really sensitive, so funky things might happen when you feed an optimistically 50 ohm ckt with non 50 ohm source and load. Also your "second half of antenna" is not being fed with resistive 50 ohm feedline impedance like the first half. None the less, usually survivable situation. Just saying it could be big fun under specific circumstances.

Question 2) Yeah good luck there. You're asking a very general question about which entire antenna modeling books have been written and whole finite element analysis programs like ANSYS have been designed, so the answer is going to be the size of a textbook or a computer DVD. Maybe someone who's bored with some modeling software could answer a very specific question, maybe.

As stated just do the vector math at each junction. There are releatively simple programs that do just that and are pretty accurate.

Shifting your impedince up or down feed point, i belive changes nth.

If you imagine the current flows throw the wire,it will face two impedences.one is Z and one is R from the wire itself.

3
Trap dipole tuning up on the wrong band

2
What is this matching technique called?
4
Does antenna width/shape affect resonant frequency like length does?
2
How does the antenna length affect signal transmission/receipt in different bands?
1
There is no reverse flow of energy in a mismatched transmission line, is this correct?
4
NMO bicycle mount antenna has unexpected SWR
4
Basic antenna matching theory?
2
How to model my rooftop vertical on 4NEC2?
2
How does end loops on a long wire antenna affect antenna length
1
Trying to identify and understand this antenna design - ground independent dual band vertical
1
How should I think about "extra" impedances inserted within/across a transmission line?