Trap dipole tuning up on the wrong band

Now take a look at the output from my antenna analyzer: 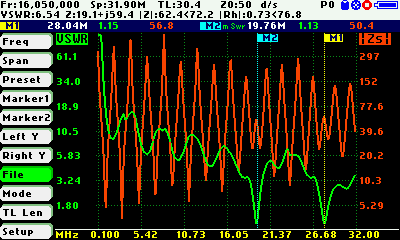 Whhaaaat... Well, I'm happy with the 10 meter resonant point (given by M1) but what the heck happened next? I read somewhere that traps would electrically shorten all subsequent dipole sections, but i'm not sure what to make of this. Why would the 12 meter section be so far out of tune. Any ideas?

Traps require that the sections that follow them to be shortened because they look like loading coils. We can demonstrate this by calculating the impedance of your trap at 28MHz and 24.9MHz.

The impedance of a parallel LC circuit is given by:

So for your trap:

This is the resonant frequency in radians per second; if we divide by 2π we see that it's 28.13MHz as expected. We can then calculate the impedance at the relevant frequencies:

In the case of 28MHz, the trap is a high impedance, and this serves to reduce the current on the section past the trap to some negligible level.

At 24.9MHz the impedance is much lower, but it's not nothing. Additionally, it is no longer a quarter-wave down the antenna, but something less. Because this impedance is purely imaginary and positive, it's an inductive impedance. We can divide the reactance (the imaginary part of impedance) by ω to get an effective inductance:

Because the coil is not at the base of the antenna but closer to the tip, its effect on the feedpoint impedance somewhat diminished. I don't know the exact math, although you can find loading coil calculators around the net. Normally we use a loading coil when we don't have room for a full-sized antenna, but here we are reasoning in the opposite order: because you have a loading coil, your antenna can't be full-size.

Not the answer you're looking for? Browse other questions tagged hf antenna-construction or ask your own question.

12
How does an antenna transform impedances along its length?

3
How to build the smallest directional antenna (ISM band)?
6
Tuning/trimming a ground plane antenna
1
What are the wire lengths of the RadioWavz OCF 40m dipole?
3
Unexpected Resonance - Dual-Band Dipole
3
asymmetric shortened dipole
4
3 Band (80-40-20 Meter) Fan Dipole Tuning Question
0
Why does the HamQSL website say the 40m band is fair and the 20m band is poor during the day?
3
If a sealed, non-airtight pipe is used as antenna element, how big of a problem is condensate trapped inside?
1
Tuning wire with SWR LED
1
Common-mode choke (CMC) hurting my SWR. Live with it? Drop the choke?