How does a slot antenna work?

How does a so-called slot antenna work? How can one construct one? What might be the radiation pattern and efficiency compared to a wire antenna?

And, if a small slot antenna "works" at mobile phone cellular and radar frequencies, would a very large hole with proper (slot) dimensions in a large enough building (barn, aircraft hanger, office tower) work for some HF bands?

If we cut a hole in an infinite conducting plane, and feed it with a voltage source across the center, we get a slot antenna: 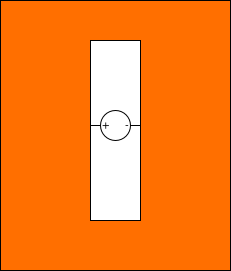 Because the slot is between the sides of the voltage source, the currents must travel around the slot. These currents traveling over a large distance are what make it an antenna and not a Faraday screen.

Babinet's principle, with some refinements from H.G. Booker, relate the slot antenna to a dipole. If, instead of a hole we have a conductor, and we make a very small cut in the center of this conductor so we can put a voltage source across it, we have a dipole. This dipole will be very similar to the slot, except:

The impedance of the slot antenna ($Z_S$) is related to the equivalent dipole ($Z_D$) by:

If the slot is made wider, this is equivalent to making a dipole thicker, and it has the same effect: increased bandwidth and decreased length at resonance.

In practice, we don't make slot antennas out of infinite conducting planes since infinite planes are so hard to find. A sheet that was many wavelengths big, such that there was negligible current far away from the slot, would be a good approximation. However there wouldn't be much point to it: the equivalent dipole would be smaller. Perhaps most of the slot antennas of this type are undesired, such as interruptions in the ground plane of a PCB, or undesired holes in something that should be acting as a shield.

For slots that are made to be intentional antennas, they are usually slots in a waveguide or a box. Of course this changes the radiation pattern and the impedance, and the feed is not a voltage source directly across the sides but provided by the currents in the waveguide, but the basic mechanism of how they work remains the same.

13
How does a folded dipole work?
9
How might one realize a first order, two dimensional RF field antenna for HF?
10
How does a “chip antenna” work?
8
How does a Dual Band Handheld Antenna work?
6
How does Wi-Fi antenna work?
4
DAB antenna in roof space
1
Is it possible to make antenna for one specific frequency?
0
Cell tower identifier antenna isolator cannon
5
How does a Viper Antenna work?
3
2.45GHz: constructing a horn of *thin* steel, what are good ways to join the edges (at least one joint along corner?)