For an antenna to work, doesn’t charge have to flow through it? A current must be present. To me it indicates it must be a circuit, but how is a dipole a circuit?

If they are not circuits, then how does charge flow in them?

What do you mean by "circuit"? Do you mean there's a loop of conductor from one side of a battery to the other, possibly with some other conducting components along the way? How about this circuit?

Is there a circuit here? There certainly isn't any way to follow a line from one side of the battery to the other. Each half connects to opposite plates of the capacitor, and those plates are separated by an insulator. Yet, if you flip that switch repeatedly, the LED will blink. Clearly there's some current flowing.

What if we now pull the ends of the capacitor apart? 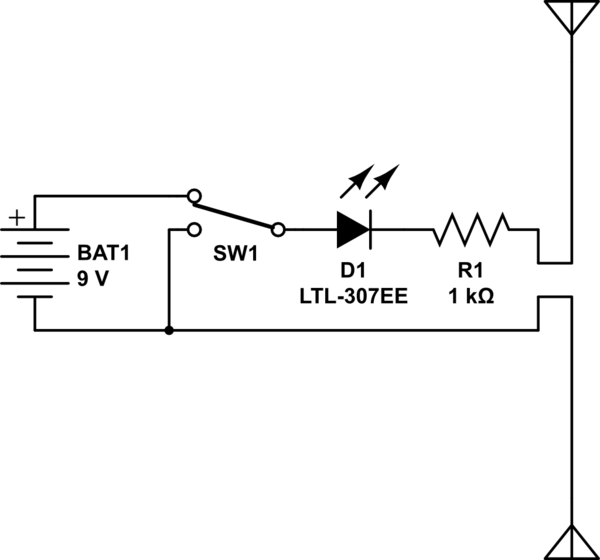 Yep, it's a dipole antenna. Lose the LED and the resistor, and flip the switch a few million times per second, and you have a transmitter.

Not illustrated here is also the inductance of the antenna. All circuits have inductance, which you can realize if you follow a similar argument but with an inductor instead of a capacitor, and start straightening the coil into a straight line. The inductance decreases, but it never goes away. Usually we don't draw the inductance because it's small enough to be negligible in a simple circuit that blinks an LED.

Thus, antennas have capacitance and inductance. They also have resistive losses (unless they are made of superconductors) and radiation resistance. Putting all these together, antennas can be modeled as an RLC circuit.

The idea that a closed circuit — a loop — must be present for current to flow is a simplified description, which is only true for simple DC circuits. It's a simplification that works because in the DC case, if there is no complete circuit and yet current is flowing, then charge is accumulating somewhere, and the electric field from that excess of charge will oppose the current, increasing to the exact point at which the current stops.†

However, in the AC case — and RF is AC, or perhaps “beyond AC” depending on how you classify things — the current is expected to reverse, and therefore those accumulations of charge can go away again, so the system can pass through repeating cycles of charging and discharging. The common circuit component in which this happens is a capacitor.

The movement of charge in a dipole antenna is somewhat like that in a capacitor, with “the rest of the universe” substituting for the space between the capacitor plates.

Like in a capacitor, no charges actually move from one half of the antenna to the other (except indirectly through the rest of the circuit). Instead, the charges bunch up in the antenna, forming a positive excess on one half and a negative excess on the other. In a receiving antenna, the energy to push the charges together comes from the incoming wave. In a transmitting antenna, it comes from the transmitter.

As the wave continues through the rest of its cycle, the antenna discharges and charges in the opposite polarity.

Thus, the rest of the circuit connected to a receiving antenna “sees” an oscillating voltage corresponding to the original wave.

† Actually, it'll increase a little bit further and reverse — sloshing back and forth a bit until it settles down. This is due to inductance. But that doesn't matter for the rest of this answer.

Yes, an antenna can be part of a circuit, but it's not as simple as the usual resistors, capacitors, diodes, etc. that you're used to. You need a different set of tools to understand how an antenna works.

This distinction is sometimes referred to as "lumped" vs "distributed" elements. In circuits, the elements are either lumped elements (resistors, capacitors, inductors, transistors, etc) or have lumped ports (transmission lines). Distributed elements are modeled by using Maxwell's equations.

From a physicist's perspective, everything you need to know about electronic circuits is contained in Maxwell's equations. You could apply them to simple resistive DC circuits and, after a lot of grungy math, come up with simple equations that describe the behavior of those circuits. But you'd hate it. So we use the "lumped matter discipline" -- if we assume that we can treat circuit elements as discrete lumps of matter, that the magnetic flux around each lump doesn't change, that the charge inside each lump doesn't change, and that the circuit elements are much smaller than the wavelength of the signals that we're dealing with, then we can simplify Maxwell's equations down to Kirchoff's laws, Ohm's law, and the various other tools that you've learned to use for analyzing circuits. For an antenna, the third assumption obviously doesn't hold; neither does the first. So the usual tools for circuit analysis don't apply, and you have to fall back to more basic, but more complex, tools.

Its easier to see an antenna as a ressonator. The antenna ressonates in the frequency that is fundamental to it. Electrons (the charges you refer to) go forward/backwards in the frequency of the fundamental. And thats simply that. Power is transmitted to the air as eletromagnetic waves generated by those electrons accelerating/decelerating (magnetic field) and by the charge up/down of the elements (electric field).

Not the answer you're looking for? Browse other questions tagged antenna theory antenna-theory or ask your own question.

2
Why does a counterpoise need to be grounded

4
Is RF current always confined to the inner diameter of a braided outer conductor of coaxial cable?
0
What's the practical significance of the source impedance in an RF filter?
1
How does a gamma match on a dipole work as a balun?
2
Bow Tie antennas impedance
2
resonance vs resonator in antenna
0
For a center fed half wave dipole operated at resonance, are the voltage and current in phase only at the feed point?
3
Confusion about dipole standing waves and feed point impedance
3
Does Kirchhoff's current law (KCL) apply to antennas?
4
When a dipole antenna is fed via coax, what powers the ground-side of the dipole?
0
Is the phase difference between the voltage and current of the standing wave on a dipole antenna constant along the dipole's length?