What are amateur radio bands? [closed]

Want to improve this question? Update the question so it focuses on one problem only by editing this post.

I'm new to radio and would like to know what amateur radio bands are. I'm also wondering about the range of these bands/how many there are.

Take out an old AM radio and look at the dial. You'll see frequencies marked from 535 to 1605 kilohertz. This is one radio "band." There are many bands of radio spectrum, allocated for amateur, government, military and commercial radio uses. If you could hear the many different bands, you would find aircraft, ship, fire and police communication. You would also hear "shortwave" stations, which are worldwide commercial and government broadcast stations from the U.S. and abroad. Amateur radio operators ("hams") are allocated 26 bands (groups of frequencies) spaced from 1.8 Megahertz, just above the broadcast radio frequencies, to 275 Gigahertz. Depending on which band is in use, we can talk across town, around the world or out to satellites in space. Hams can even bounce signals off the moon!

Here's a picture from AARL: 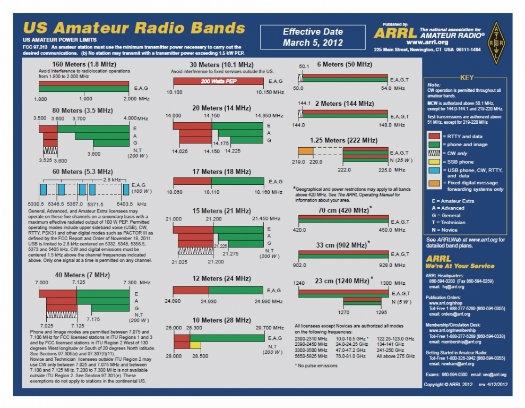 "Bands" refer to frequency ranges, commonly allocated internationally for a particular purpose. Such purposes can be amateur radio, maritime mobile, broadcasting, and so on.

The exact frequency allocations vary from one country to another, but in general they are tied to which ITU region you are in. The world is split into three ITU regions called regions 1, 2 and 3. For example, North America has one overall set of bands, whereas Europe has a mostly overlapping but somewhat different set of allocations. (The differences tend to get more pronounced the higher in frequency you get, due to the lesser need for international coordination.) Radio amateurs are allowed to use frequency spectrum basically across the entire RF range, with the lowest frequency band currently allocated internationally for amateur use without a special license being the 136 kHz band, also known by its wavelength as the 2200 meter band, spanning the frequency range 135.7 - 137.8 kHz.

It is not possible to state a global number of available amateur bands, because some bands are only allocated in certain countries or regions (for example, the North American 220 MHz band is as a rule not available in Europe, and the UK 70 MHz band is generally not available in other parts of Europe) and others are sliced into several allocations (as an example of the latter, as I recall until fairly recently in Sweden the 160 meters band was split in two, 1810 - 1850 kHz and 1930 - 2000 kHz). However, there are approximately two dozen frequency bands allocated on a primary or secondary basis to amateur radio. Each of these has characteristics different from the others, and many times a certain band may allow for a certain communication while others do not. (For example, night time 7 MHz and night time 24 MHz are quite different in terms of radio propagation.)

Very broadly speaking, not considering such artificial enhancements as repeaters, satellites, Internet links and so on, there are two peaks in attainable communications range. At very low frequencies, antennas are small and close to the ground in terms of wave lengths, which influence range in a negative way. Around medium HF range has both the advantage of being able to communicate by ionospheric reflection as well as antennas being (relatively) manageable in terms of physical size. By the time you move into the upper HF range and up the ionosphere doesn't help you a lot anymore and thus the attainable range drops. By the time you get reasonably well into the VHF range and above, even fairly-high-gain antennas become physically small enough to be practical, so while you are generally limited to line-of-sight communications, attainable range rises again. Then by the time you start hitting microwave frequencies (roughly, upper UHF and up), distances in terms of wavelength become a limiting factor, which means that the attainable range drops again.

Not the answer you're looking for? Browse other questions tagged jargon range or ask your own question.

16
What bands and modes will give me voice at 3,000 miles?
0
LoRa Radio RFM96/98 SX1276/8 configuration settings for Longest Range
3
Can I estimate range of a low power transmission based on power (in mW)?
2
Amateur Radio Long Distance Data Communication
4
Equipment Pricing