How to find the front-to-back ratio given an antenna radiation pattern diagram?

I know that the front-to-back ratio is 18dB in the below antenna radiation pattern diagram, but I don't know how to read the diagram to obtain this result. How does one read and understand such diagrams? 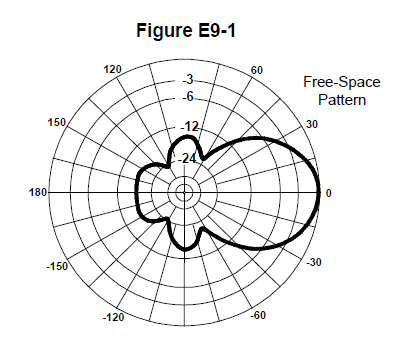 Within the diagram, a logarithmic scale is utilized to represent radiation strength. This is in addition to the fact that the Decibel is a logarithmic unit. (The diagram really should explicitly list its units, but for the application of antenna radition, the unit is typically dB.) You can tell that a logarithmic scale is in use by observing that the distance between the $-6$ and $-12$ lines is the same as that between the $-12$ and $-24$ lines, so it's obviously not a linear scaling.

Since logarithmic scales transform division into subtraction, we calculate the ratio front to back by subtracting the logarithmic back value from that of the front.

Not the answer you're looking for? Browse other questions tagged antenna math or ask your own question.