(I promise there will be a question in this wall of text. I'm just giving context.)

I've been wanting to try my hand at building my own antenna system for the last few weeks and in doing research, a number of questions came up. In particular, matching transmitters, feed lines and antennas in order to create a fully balanced system.

This site, run by W5ALT, gives a great overview on why different systems need to be impedance matched in order to function properly, as well as consequences of improper impedance matching. I therefore understand why a balun would be used for coax feeding a balanced dipole, both for balance and impedance purposes.

I also went about researching different antennas for portable use. Stackexchange led me to the October 1984 QST article on a full-wave delta loop. One of these setups (see following image, part B) describes a 450-ohm ladderline going into a 100-ohm feed point on the loop. 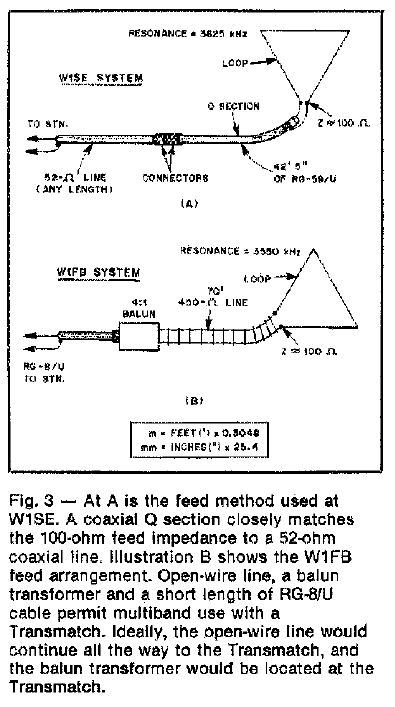 On this site, the author says to NOT use a balun between the 50- or 75-ohm coax feedline and the 100-ohm feed point:

Don't use a Balun on this Antenna! On a horizontally oriented loop you can feed a corner, center of a side or anywhere it is unimportant.

I also have a folded dipole fed directly by ladderline (Cobra Ultralite Sr.) that functions quite well (I busted through a pileup for a Portuguese contest; it can't be that bad). It is fed by 50-ohm coax from a tuner into a 1:4 balun to the ladderline. From various sources on the internet, the typical impedance of a resonant dipole is roughly 73 ohms. A folded dipole will increase this impedance to the square of the number of parallel elements (for the ultralite sr. with 3 parallel elements, I calculate 9 * 73 = 657 ohms impedance). The feedline could very well be 600-ohm ladderline (I am not sure; the line is not marked with impedance).

So my question is this: in particular, why does the W1FB full-wave loop design not require some form of a transformer between the 450-ohm ladderline and the 100-ohm antenna? My research tells me it's obvious that having matched impedance would allow more efficient power transfer from the feedline to the antenna. Is it because ladderline is balanced? Is that kind of impedance mismatch allowable? Is it a rule that you don't need a balun for ladderline? Is it purely a choice by the designer? I'm familiar with the subject of electronics, but I'm certainly no electrical engineer, so the theory behind this just seems to contradict practical examples.

Thanks for any and all help. I've been trying to find a reason for this for days and nothing seems logical to me.

It doesn't make sense because people on the internet are wrong or misinformed, present conflicting information, or just plain don't know what they are talking about.

Impedance mismatches aren't the end of the world. An impedance mismatch does not, in itself, cause power loss. It causes power to be reflected, at which point it will go in the other direction until it's either absorbed or encounters another impedance mismatch which reflects it back at the antenna. When it gets back to the antenna, some of that power is radiated, and the rest of it reflects back and forth again until its all radiated.

In fact, if you had a lossless transmission line, impedance mismatches wouldn't matter at all. Each parcel of power would just reflect back and forth until it's radiated.

We can't have lossless transmission line, but we can keep losses very low. One way is to buy good coax. Good coax is expensive. Another way is to use ladder line. For the cost, ladder line has lower loss than coax.

Interestingly, a piece of transmission line can be used as a transformer. If that transmission line is 1/4 wave long, it's called a quarter-wave transformer, and it makes whatever's at the end of it look like the conjugate impedance. That's part of what's going on in some of these antennas, but there's a problem...

Whenever you hear someone say "don't use a balun", you should be thinking:

See Using a balun with a resonant dipole. You absolutely can feed a dipole without a balun, but you have to understand that if you do it, the coax is as much of the antenna as the balun. This means anything you read about dipoles (like, their radiation pattern, feedpoint impedance, etc) does not apply. It doesn't necessarily mean it's a bad antenna, it's just some other kind of antenna which might be good or bad. Since the geometry of the feedline is different at each station, it doesn't mean anything. It just means you don't know.

Be especially dubious when you hear "don't use a balun" in combination with "multi-band antenna". One way to make a multi-band antenna is to design the antenna such that there are a lot of common-mode currents on the feedline, thus making the feedline in effect a long-wire antenna. The "antenna" is really just a distraction: the feedline does most of the radiating. There are quite a few antennas that dubiously work this way.

I hope that addresses your concerns enough. I can't really explain every question you have (that would be an entire book on antenna design), but regardless there are some good lessons to be learned here:

Your question: "...in particular, why does the W1FB full-wave loop design not require some form of a transformer between the 450-ohm ladderline and the 100-ohm antenna?"

I used a 80-meter full wave delta loop for years operating on 80 through 10 meters. When I say 80-meter full wave delta loop I mean that I had a full wavelength of wire up in the air as the delta loop. I fed it (one foot from a corner as it was physically better to do that way) using 450-ohm window-style ladder line. At the point that the transmission line was brought into my "shack" I used a 1:1 Balun to go from to coax. My coax run using LMR400 (low loss) was about 10 feet to my antenna tuner. Such an antenna tuner is a necessity with a multi-band antenna.

This was an excellent wire antenna and it performs very well. At higher frequencies (than 80) it has lobes of higher gain on it (nulls too of course) so if positioned correctly you can have a nice high-gain antenna. My models using NEC4 showed lobes of gain up to 9:1 over the isotropic ground free Dipole radiator.

I would still be using the delta loop if it were not for the fact that I had to cut down one of the 90 foot tall cedar trees that was used as one of the anchor points.

Agree 110% that a balun is required, otherwise you have half a loop, and half a strange monopole, with lots of current on the cable, in the shack etc.

Balun goes where you change from Balanced to Unbalanced, and it can be a choke, not a transformer.

The choice 70' of 450 ohm line is odd. The open wire line is great, low loss and cheap, but 70' is exactly a quarter wave in 80m, so it'll transform the supposed 100 ohms into maybe 1600 ohms. Too high for the 4:1 balun. Rather use an even multiple of 70', so the impedance has returned to something near 100 ohms. Of course if it's a multi band antenna, it's much more complicated and needs hours of simulation.

Not the answer you're looking for? Browse other questions tagged impedance balun .

39
Using a balun with a resonant dipole
9
Why does ladder line generally have a lower loss than coaxial cable?

17
Understanding coax impedance
4
Coaxial Folded Dipole Antenna Matching Impedance
8
How is a 1:1 current balun different from a choke?
2
Balun and impedance matching suggestions for dipole antenna
2
Balun and tuner configuration for multiband dipole
5
How to match low impedance of NVIS Dipole?
2
300 ohm to 50 Balun at antenna feedpoint, or near receiver?
4
Does a dipole require a 1.5:1 balun?
4
Actual Impedance of a folded dipole at resonance