Is it possible to make a shield that blocks time-varying electric fields, but not time-varying magnetic fields?

Take, for example, a shielded loop antenna. It is often claimed that the antenna is inside the shield, and the shield blocks electric fields from reaching the antenna, while allowing magnetic fields to pass through to the antenna. This in turn reduces noise in environments heavy in electrostatic noise, the argument goes.

Is this physically possible? Can a shield block time-varying electric fields while allowing time-varying magnetic fields to pass unchanged? 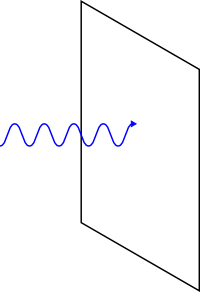 Since this wave is vertically polarized, the electric field vector points alternatively up and down. Because it's a radiated wave, it's also accompanied by a magnetic wave, in phase, but horizontal.

If you do the math, as it turns out, these magnetic fields cancel.

OK, but what if it isn't a radiated wave, but just a magnetic wave incident upon the plane? Maybe there is a solenoid nearby, which we are driving with an alternating current. Will the plane block that?

This seems odd, because a sheet of copper has no particularly obvious magnetic properties, and classically we think of separate magnetic forces and electric forces. How can a copper sheet have any effect on the magnetic force? When Maxwell made his equations, he didn't know either: it was just experimentally found to be true.

14
What does the addition of a shield to a small loop accomplish?
5
Does a loop antenna have less susceptibility to atmospheric noise than an open ended antenna?

8
Why is the electric field orthogonal to the magnetic field from an antenna?
5
Is possible to make small HF microstrip or helical antenna by using high permittivity dielectric material?
1
Is it possible to make antenna for one specific frequency?
8
Why are there differences in antennas that depend on electrical component and magnetic component of a radio wave?
0
Can I make ferrite paint? Will it shield my antenna from my roof?
14
Why do amateur radio operators call an RF choke a balun?