A strong (100 kW) local FM transmitter causes interference to or overloading of receivers in the VHF/UHF bands. It seems like a single, properly chosen, capacitor could make an effective passive high-pass filter. I would like the filter to pass 200 MHz and up effectively, while suppressing 108 MHz and below. I'm assuming that this doesn't require a particularly challenging filter slope. I envision using this in-line with a 50 Ω coax.

With this question, I am thinking of over-the-air TV reception as well as amateur radio and scanner reception.

I know specific FM traps are available, but those are band-stop filters. Shouldn't a high-pass filter be easier and have lower insertion loss as long as I don't care about anything below the cutoff frequency?

BTW, I didn't see much in the way of commercial products to do this. I am looking for something competitive with a $5-10 Radio Shack FM trap.

While that would work somewhat, it won't work great. What you are describing, with a single resistor and capacitor, is a first-order filter. Such a filter has a roll-off of approximately 6dB per octave. This means for each halving of the frequency, attenuation is increased by 6dB.

Say you design your filter to have a a cut-off frequency of 200 MHz. The FM broadcast band ends at 108 MHz, approximately one octave below that. Consequently, you will get an attenuation of about 6 dB. That's not much.

It's a common engineering problem that steeper filters are harder at higher frequencies. If we wanted to separate 8 MHz from 100 MHz, that's still a difference of 92 MHz as in your example, but we'd have approximately four octaves to make the transition.

Given that you are looking for a simple solution, and you are experiencing problems from just one station, I would suggest using a quarter-wave stub of transmission line as a filter. Advantages:

Remember, it only looks like a short or an open at the frequency where the stub is a quarter-wavelength long or an odd harmonic thereof. To other frequencies, it looks like some other complex impedance, which means it will change the impedance of your antenna, but this is probably not a big problem for a receive-only application. If it is a problem, you will need a more complex filter -- even your simple RC filter has this problem. Again, the merit of this approach is simplicity, not perfection.

Anyhow, now you have either a short or an open which you can insert into your circuit. To make a notch filter, you have two options:

It's easier to tune if you opt for a stub that's open at the end, because you can just cut it. So this is going to look like a short, so we want to put it in parallel, which will effectively short out the antenna for frequencies where the stub is a quarter wavelength: 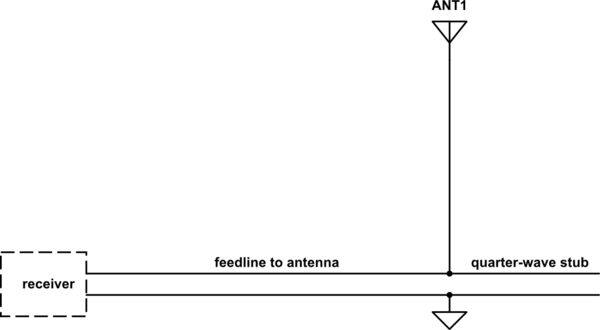 A further advantage of this approach is that the stub can be added with a T-adapter. You can also just strip the transmission line and solder it together. Don't forget to weatherproof the connections if its outside.

Just for completeness, you can also use a series stub, which effectively disconnects the antenna: 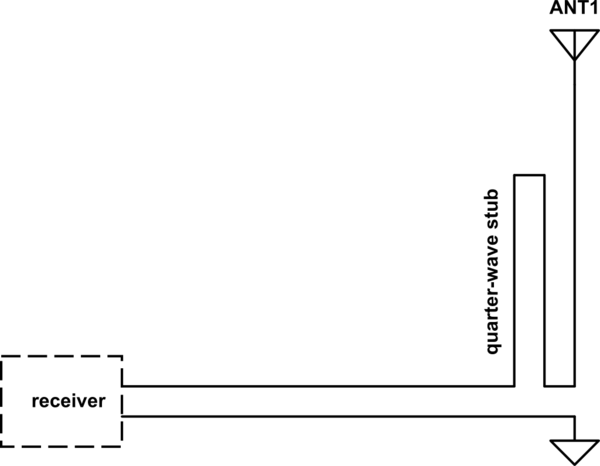 The two work identically, so choose whichever one is easier to fabricate.

Tuning is critical, and it's easier to make it shorter than longer, so cut it a bit longer than this, then keep trimming off little bits until you get maximum attenuation of the problematic station.

Mini-circuits is the place for filters and other RF gadgetry. See http://www.minicircuits.com/products/filters_coax_high.shtml for their high pasd catalogue.

These little filters can only carry about 1 Watt, so would only be useful for a receiver, not a transceiver.

MC do also make an FM band filter which is a band stop device with very sharp edges.

The benefit of buying something built up is that it's performance will stay reasonably constant over temperature and time. You need a fairly high order filter to get many dB between 108 and 200 MHz, and these can be sensitive to component drift.

Not the answer you're looking for? Browse other questions tagged equipment-design rfi filter or ask your own question.