What are the geographical restrictions in using the 70cm band in the United States of America?

Geographical restrictions exist for various frequencies in terms of usage in the United States of America as stipulated in 47 CFR 97.303. What are the restrictions, if any remain, in terms of geography where you cannot use all or part of the 70cm band? I thought there was an ARRL map that showed this once upon a time but I cannot locate it. The relevant US regulation just defines things by metes, bounds, and lines that I'm having a hard time conceptualizing.

Canada does not include 420-430 MHz in their band plan for 70cm, so the restriction is in place to prevent interference to Canadian radio services. There are also a few other geographical restrictions that are made explicit. This excerpt from FCC Part 97.303(m) — In the 70 cm band:

(2) Amateur stations transmitting in the 420-430 MHz segment must not cause harmful interference to, and must accept interference from, stations authorized by the FCC in the land mobile service within 80.5 km of Buffalo, Cleveland, and Detroit. See §2.106, footnote US230 for specific frequencies and coordinates.

Here's a rough representation of "Line A" on the map (http://www.hamradioschool.com/t1a06-interference-in-70-cm-band/): 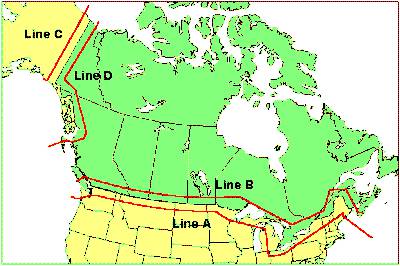 There is additional information on the quiet zone info at: http://www.micronetcom.com/quiet_zones.html in Section E. "420-450 MHz band".

There are additional power output restrictions in California (around Beale AFB) and in Cape Cod, where the AF have PAVE PAWS radar installations that also use 70cm. The restrictions AFAIK are only mutual agreements with local ham operators and clubs (particularly clubs running 70cm repeaters), and have not been formalized as part of the FCC regulations. Here's an article here for more info: http://www.arrl.org/news/new-70-cm-coordination-agreement-reached-for-new-england

Canada does not include 420-430 MHz in their band plan for 70cm, so the restriction is in place to prevent interference to Canadian amateurs.

Actually, this is to prevent interference to non-amateur fixed and mobile comms; the treaty/arrangement text is available with a simple search. WHY Canada went and did this is another matter I haven't been able to find. This is also why the FCC justified removing 420-430 from ham use in 3 US border cities around the Great Lakes, since hams were already absent there due to their being within Line-A's boundaries.

There is also text about interference to US radars on the band (just like the comment above), with the Concrete, North Dakota radar mentioned by name several times and Alaska a couple of times. Lines B and D are not often mentioned on this side of the border, but are very important to the US NTIA. (I believe Industry Canada regulates everything over there rather than having two agencies do it like we do here, which seems pretty dumb on our part--but then again, you can never have enough alphabet soup agencies, right?)