It's simply a bromide amongst hams that you need to match the output impedance of a transmitter to the input impedance of an antenna, but I never thought through the implications of this until I came across this summary in a reputable textbook:

Now in one sense of course this is true, because whenever we talk about "output impedance" we get this sort of picture (which I've cribbed from https://electronics.stackexchange.com/a/423884/9043): 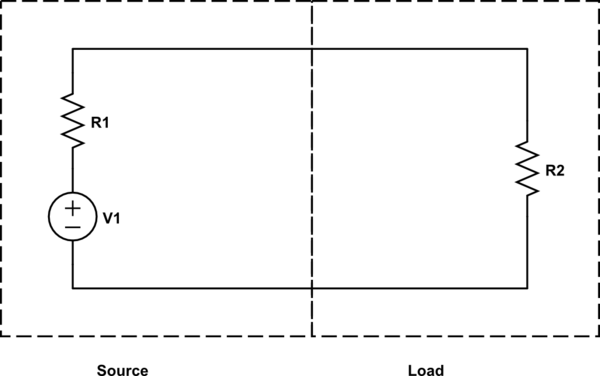 And so when the "source" and "load" resistances are matched as we all know they "should be", it's inevitable that only half the power would make it to the load!

But this is also rather astounding! So basically the "ideal condition" (matched load to source) which we all know is required for "maximum power transfer" implies by its very definition a maximum efficiency no greater than 50% under any circumstance?!

I had noticed this relationship in practical transmitters I have, that they generally need more than double the DC input power than their maximum RF output power. But I assumed this was for a — completely different? or directly related? — reason: the efficiency of the amplifiers. Even from audio electronics I new that a Class A power amplifier was less than 50% efficient, and just figured maybe that was what radios tended to use, instead of the more efficient topologies, to maintain clean output signals.

Now when I learned about amplifier efficiencies in audio context (e.g. <50% for Class A, <78.5 for Class AB, ~80% for Class C, over 90% for Class D…) I assumed that was overall system efficiency. But with a amplifier "source" and matched speaker "load" wouldn't the same power transfer issue also come into play — that regardless of how "efficient" the amp is it always has to heat up at least as much as however much energy the load is radiating? So a Class D amp would really be 45% efficient within the overall system — i.e. 90% of the theoretical maximum of 50% efficiency?

Or are these two things actually somewhat related, the 50-50 power split between the transmitter and the antenna, really meaning the same thing as the 50% efficiency of a Class A amp? Because on the one hand, I can't see how we would say "a Class AB amplifier wastes only 21.5% as heat in transistor switching…" without also mentioning "…but then of course 50% of that is also wasted as heat in the amplifier's 'source impedance' anyway". But on the other, if we really can make amplifiers more efficient than 50% then how does that "match up" with what Balanis is saying?

A partial answer, more about matching than about transistor amplifiers:

No this is the wrong way around. If you have control of R1, the source impedance, for maximum power transfer (and efficiency) you want it as low as possible. This is what you see in practice, with audio and RF amplifiers and also with Honda generators.

A true 50 ohm source impedance is only seen in lab equipment, where you need to be certain the forward power is the same into any load impedance, and this is usually done by having an attenuator right before the port.

Off the shelf transmitters will have an impedance specification, that they're designed and tested to work with. We chose or tune the antenna+transmission line to present 50 ohms to the transmitter because this is what the transmitter is designed for not for maximum power transfer.

In fact as its output impedance is probably quite low, a transistor amplifier would probably generate more power into a 10 ohm load than a 50 ohm load. This could overload or overheat the transistors, so most amplifiers have some sort of high-VSWR protection. (Though some just have high-current protection to protect against low impedance loads).

The discussion in Horowitz & Hill is correct for the circuit given, and it does describe what happens to very high and very low impedance antennas. But the theorem is for that simple circuit. You shouldn't assume that all transmitters labelled 50 ohms is made up of a low impedance voltage source and a resistor.

An electrical outlet, or a generator, might have a source impedance of well under 1 ohm. We don't try to match anything to it (though we can work out the maximum power, and we know that both an open circuit and a dead short don't absorb any power or get hot.

Secondly, I recently researched a class E amplifier (for a frequency modulated WSPR transmitter so it's just generating one RF tone). It has effectively a fairly high Q resonant output filter, which is periodically "rung" by a pulse of current from the active device. The transistor is turned hard on and off which makes its losses are quite small. Theoretical efficiency is very high and practical efficency of the whole system, DC to RF, is well over 80% (90% claimed to be measured in the article above).

2
How does the Maximum Power Transfer Theorem relate to RF power amplifiers?
4
Reduction in transceiver power output into high SWR
2
How much does a RF amplifier use of its input power?

3
AN762 Amplifier Transistors
11
Why does "high SWR" damage transmitters, instead of "impedance mismatch"?
0
Regulated Power Supply vs Class 2 AC/DC Adapters
7
Impedance Matching between RF Amplifier Stages
4
Why does an RF Amplifier fail when the SWR is high?
2
How does the Maximum Power Transfer Theorem relate to RF power amplifiers?
4
Reduction in transceiver power output into high SWR
2
How much does a RF amplifier use of its input power?