I've been working with Xnec2c to model a 40 meter vertical antenna I want to build for field QRP. This antenna is short at 25 feet and uses a 1:1 unun at the base with 4 radials.

My understanding is that b/c the antenna length is not close to being resonant, the Q must be quite narrow. I recall from my basic LRC theory, that R can widen the Q. So I added 20 Ohm to the model and sure enough the SWR flattens somewhat.

It seems like a really bad idea to add a resistor to an antenna in this way. The gain without the resistor is ~2.9 dBi. That's almost half power.

First plot is with resistor and the second without.

I created 4 wire radials with excitation cards for each with -0.25 V with the vertical segment having 1 V. Then used the Sommerfeld-Nortonoption in the GN card. The losses were substantial for varying parameters. The antenna went far out of tune.

This really brought home to me the concept of the radials and RF ground.

I finished building the antenna with the same design spec with the exception of a wider range trimmer capacitor. I tuned the trimmer cap in my basement under very non-ideal conditions, to the lowest SWR of 18.

I made a contact to someone doing POTA. Very satisfying. 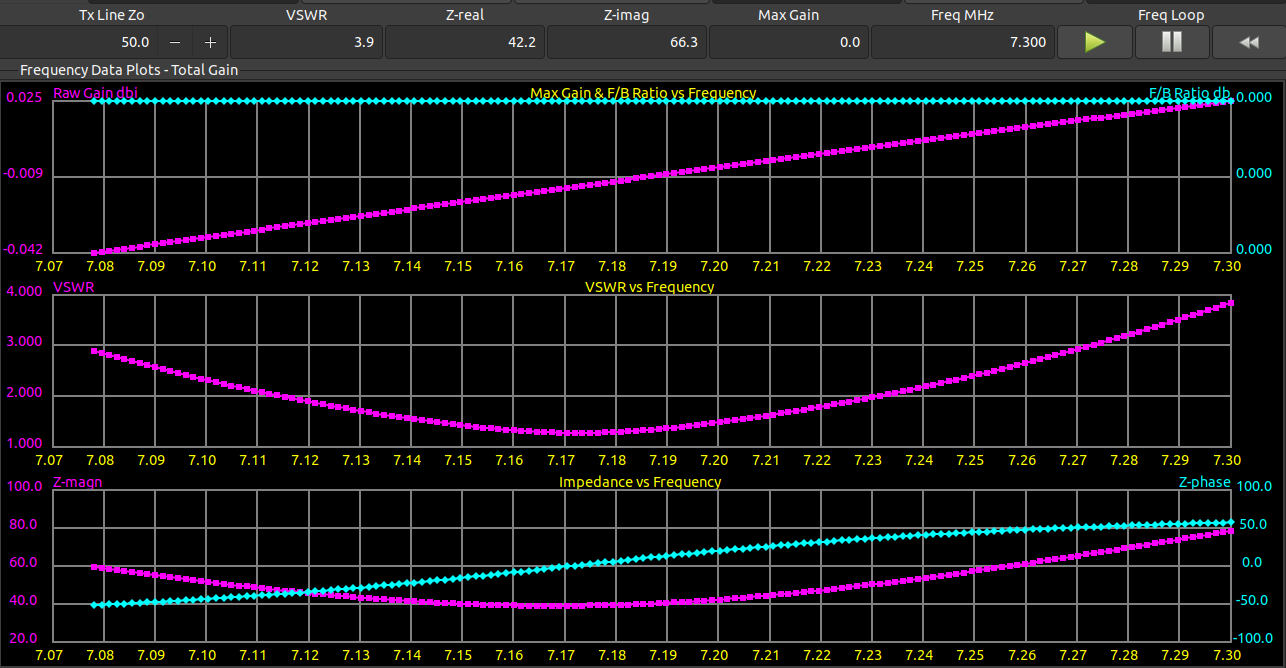 It's reasonable to add a resistor to increase the bandwidth - if you're not using a tuner, so you need it to work in various situations and across the band, then it's your only real option. It will be less efficient but that's the trade-off. Many HF antennas are worse.

uild and measure it in situ before adding resistance. I think you'll find the input R is a lot more than you expect, because of ground losses, and these will also reduce the Q and increase the bandwidth. The same loss of course, just the power is being dissipated in the ground instead of in the resistor.

Most kinds of NEC can simulate a Somerfeld-Norton ground. Try simulating with a lossy ground and see what happens to the impedance. Keep the wires several radii above the ground for most accurate results. Use this table of earth parameters to select something reasonable for your situation:

These are from the SuperNEC GUI URM, sadly very hard to find online. The manual is part of the supernec package which you can download.

Finally - In the 40 m band, 24 feet is almost a quarter wave tall, so you should get enough bandwidth for your part of the band. Couldn't you add some top loading (a T or even just a single wire hanging to one side) to make it resonate, instead of using an inductor?

Occasionally (the best known example is probably the terminated folded dipole, which places the resistor at a point that has zero current at frequencies where the antenna is resonant), but there are a few things to consider:

All that said, I tend to agree with tomnexus that, in the case of a vertical, you probably already have a 10 or 20 ohm resistance in the form of ground loss, so if your model isn't already taking that into account, it's lying to you, and you need to either add ground loss to your model before you go further, or just build and test (without the resistor).

Not the answer you're looking for? Browse other questions tagged antenna-theory antenna-construction .

11
How to determine if my antenna is an effective radiator?
12
Protect rig from static charge on antenna
6
Tuning/trimming a ground plane antenna
1
vertical 40m antenna takeoff angle
0
Inverted L Feedpoint Height
2
How do I tune my EFHW 40-10 to have the lowest SWR in the 40, 20 and 15 meter bands?
2
Antenna Mast near EFHW Inverted L
1
Unable to tune 20m vertical with trio of Hustler resonators on top
3
Issues with high SWR on HF Kits EFHW 49:1 UnUn kit