My team is planning to test an IoT sensor in Kazakhstan. This sensor normally sends data to an Edge device (a tablet PC) using the ISM radio band ranging from 902 to 928MHz. Is this band allowed in Kazakhstan?

The HBR website states that Kazakhstan is part of ITU-R Region 1 and relies on three different bands: 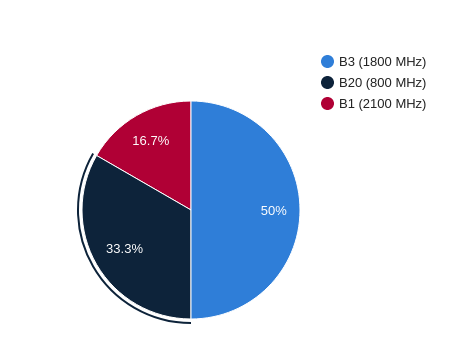 I am not sure how to understand this pie chart. Does it mean that the 915MHz is not allowed in this country? This would be consistent with Wikipedia's ISM radio band webpage, which states that the 915MHz is working in Region 2 only.

This isn't strictly about amateur radio, but it rubs up against how we are assigned "secondary" use for bands across ITU regions. However, the devices you are suggesting would not fall under the "amateur" category.

As far as I know, only ITU Region 2 signatories have allocated 902-928 MHz for ISM use. I believe that the ITU has left it up to Region 2 signatory nations how they manage access to this part of the spectrum.

From an amateur radio point of view, as far as I know amateurs have only secondary access to this band.

The primary users for "FIXED AND RADIOLOCATION PRIMARY" use (as one example of the wording for a signatory country) would have to comply with the rules for how to use the band as unlicensed primary users.

But, speaking specifically of Kazakhstan (since they are not strictly part of a region that declares the ISM band as, well, an ISM band) it is up to that country how that part of the spectrum can be used. The specific devices allowed or forbidden, the bandwidths, the modes, and the RF strength will be determined in some manner in their spectrum manangement laws.

In short: you will have to ask the agency in charge of spectrum management in Kazakhstan. No doubt there are plenty of phones, baby monitors, and radio controlled door openers in the country that use this part of the spectrum. But perhaps even those are controlled by a state corporation that has exclusive rights to the entire band. For all you know nothing else is allowed, and in some countries the implications of ignoring those laws can be less than ideal for the person who happens to have a suitcase full of RF devices they are bringing into the country.

There are, or should be, official ways you should plan to use to import and power up any RF devices you bring into this country, ideally months or years before you do so. This is probably true up to a point with respect to simply carrying a handie-talky into Kazakhstan.

Heck, some countries restrict what receivers you can bring. This is not a case where "it's easier to ask for forgiveness than for permission" applies.

Not the answer you're looking for? Browse other questions tagged itu-zones .

11
Where can I find the official definition of ITU Zones?
7
What are CQ/ITU zones used for?