Is an off-center fed dipole (and/or doublet) inherently unbalanced?

Does a balun/choke have to "work harder" in an off-center fed dipole than when the feedpoint is at the center? Or do the standing waves that develop keep the antenna balanced electrically even if the physical feedpoint is driving unequal conductors? And if that's the case, does the situation change if the OFCD antenna is non-resonant (i.e. compared to the same length doublet when fed right in the middle)?

[And also to be clear, I'm not talking about a Windom/G5RV/etc. where a portion of "feedline" is intentionally incorporated into the antenna — assume any necessary balun/choke is incorporated directly at the feedpoint for the purposes of this question.]

We've touched on aspects of this through a few other Q&A's here but I'm not finding anything specific to the "balance" of an off-center feed:

(And for full disclosure, this is admittedly closely related to my How to best ditch the counterpoise of a random wire antenna? question but seems sufficiently standalone to ask separately.)

Basically it's made me realize that my understanding of "balance" and why/when a balun is necessary is still pretty weak — I can imagine how in a simple resonant dipole fed right at the midpoint, a choke might still be have to "fix up" a bit of mismatch between the two halves especially due to real-world environment (nearby conductors, material/construction imperfections, etc.) to fully avoid current on the shield.

But with an off-center feed it seems that there's a great deal of (intentional) "mismatch" between the two sides of the antenna already while the design is still on paper. But yet we talk of the impedance "at the feedpoint", rather than the impedance "into the short side" distinct from "into the long side". Do the currents on the two sides of an off-center feed still naturally balance out despite their totally different lengths — at least as much as they would in any real-world environment? Or does the choke end up having to dissipate more and more current as the feedpoint moves closer to an end?

The voltage distribution on a dipole comprises that of a standing wave, and is determined by how far the ends of the antenna are away from the feed points, since the voltage at the ends is always fixed at maximum RMS amplitude.

The ends of the antenna set up the conditions which determine the positions of the voltage and current nodes and anti-nodes of the standing wave. For an antenna which is split in the middle and current fed, the same current flows through both antenna elements and the radio receiver / transmitter.

The current flowing through a balun will be that of the standing wave at that point. So at a current node, balun RMS current will be at a maximum and RMS voltage at a minimum.

Ignoring the effect that antenna impedance has on the voltage across the feed points, if the antenna is the right length for the frequency of operation, then from a distance when you look at voltage distribution for both halves at any instant in time, they will line up and appear as one continuous sine wave in space along the antenna elements.

If either feed point is the wrong distance away from each end, then the standing wave doesn't line up and the voltage won't be the same, and the antenna won't be balanced.

In reality, there is a difference in potential across the feed points which is the voltage which produces the incident current into the antenna at a rate as determined by the real portion of the antenna impedance, according to ohm's law and just like in a resistor.

The figure below shows a snapshot in time of the voltage of the standing wave along the elements of two off center fed dipoles with different lengths. 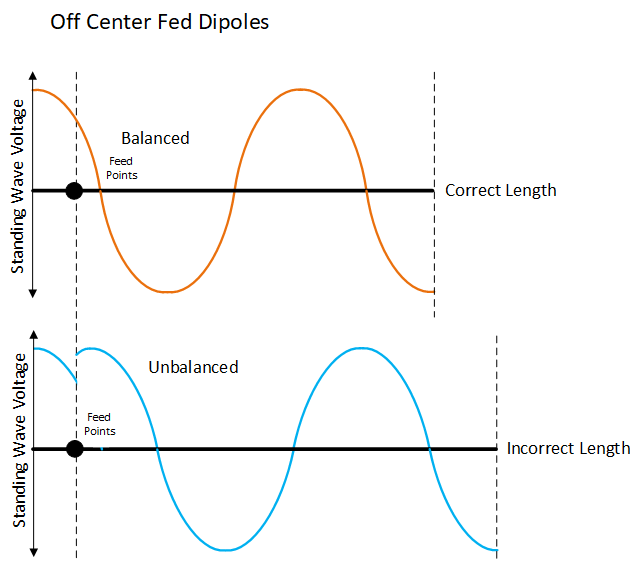 Each element has its own impedance which adds up to produce the total impedance seen from both elements at the feed points.

So the two elements of an unbalanced antenna each have a different impedance, resulting in a different voltage at the feed points.

In terms of the standing wave on the antenna, both antennas are not balanced as the waveform on each half isn't the same, and the radiation pattern will be produced accordingly.

If the currents are equal and opposite, they form magnetic fields that cancel. preventing leakage from the feed line.

If some of the current is flowing the same direction in both wires, then the feed line acts like part of the antenna instead of a transmission line, and it will radiate, and possibly detune the antenna system (unless it happens to also be resonant).

If the antenna is already nonresonant, it can make this issue worse.

In a few cases, the balun (or unun) is positioned on the feed line in an intentional way that makes the feed line part of the antenna.

A parallel feed line actually works the same way coax works... except that the shield in the coax has a chance to couple with the antenna, so you can have a magnetic field and opposing currents between the center conductor and the shield, and another field between the shield and half the antenna.

This is a shortened version of the explanation in Sevick's Transmission Line Transformers: Theory and practice

Why? A dipole in free space is balanced. However, put a large conductive object or a long enough wire near that dipole, and it will distort the EM field around that dipole. If the parasitic element isn't centered to the dipole's center, then the EM field distortion will be not be symmetric to the dipole, thus the distorted EM field will unbalance the dipole.

The shield of a coax feed line to an off-center fed dipole usually (always?) can't be centered in the dipole's EM field, thus is an off-center parasitic element.

Hypothetical: It might be possible to bring an off-center fed dipole somewhat back into balance by adding a disconnected parasitic coax on the other side, arranged with a mirrored geometry, maybe terminated with the transmitters output impedance, thus restoring symmetry. Or by feeding the dipole without any feedline (ground isolated miniature transmitter), just a matching lumped load on the other side.

I'm still looking for more explanation and more understanding but I wondered:

do the standing waves that develop keep the antenna balanced electrically even if the physical feedpoint is driving unequal conductors?

This is somewhat surprising to me — I mean it does make sense when looked at in the obvious way (the antenna being split unevenly) of course, but not in the case of a resonant antenna (e.g. why would the electrons "want" to go outside and along the coax when the antenna itself is a perfect fit…). But that's probably yet another separate question!

That said, the W8JI description is corroborated by this W5ALT Antenna Balance article:

As far as the resonant vs. non-resonant part of my question, there's perhaps some clue in the ARRL Antenna Book, in a "Feeder Unbalance" section on page 26-5 in my 1994 17th edition:

With end feed, the currents in the two line wires do not balance exactly and there is therefore some radiation from the line. […] In addition to this unavoidable line radiation a further unbalance will occur if the antenna is not exactly resonant at the operating frequency. […]

Unfortunately this discussion is in the context of the most extreme (end-fed) case and its unclear how it might change as a function of only partly off-center feeding.

Not the answer you're looking for? Browse other questions tagged antenna-theory wire-antenna balun .

19
How does moving a feedpoint off-center in a dipole affect the resonant frequency and resistive load?
8
New operator struggling to make a contact
7
Understanding coax radiation and "current on the shield"
3
VHF Balancing, necessary? Methods?
2
How is impedance matching related to balance and common-mode currents?
0
Why do ham radio operators refer to current flow on the outside of coax as common mode current?
1
How to best ditch the counterpoise of a random wire antenna?

39
Using a balun with a resonant dipole
6
Impedance Matching Different Feedlines
2
Balun and tuner configuration for multiband dipole
6
Why do we distinguish between balanced and unbalanced?
1
How does a gamma match on a dipole work as a balun?
5
How can I calculate current distribution on an end-fed dipole antenna in theory?
4
Dipole increased CM current using choke balun
2
Will using a 1:1 balun at the feedpoint of a center feed dipole result in no common mode current on the outside of the coax?
2
For a half wave dipole antenna, what's the value of the reactances that cancel out when the antenna is resonant?
0
For a center fed half wave dipole operated at resonance, are the voltage and current in phase only at the feed point?