What is the difference between antenna input impedance and its radiation resistance?

I got to know that the input impedance of the halfwave dipole antenna is given as:

where Im is the maximum current on the antenna( when excited with a 1 volt supply),

H is the half-length of the antenna,

Z is the position on the antenna and β is wave number.

Apart from the input impedance there is another parameter called as radiation resistance calculated by dividing the I2m from the power radiated by the antenna.

Now my doubts are: 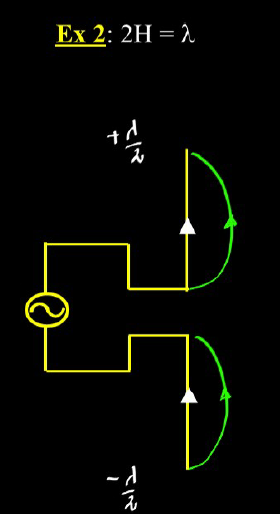 I seem to have confused myself a lot. kindly clarify me on this doubt.Thank you in advance.

Antenna input impedance and radiation resistance are two different characteristics however they are intimately related.

The input impedance of an antenna is a complex quantity, with a real part Resistance R and an imaginary part Reactance X.

Only the real part of the impedance can absorb RF energy and result in EMF radiation, and so most antennas are designed to have no reactance at resonance. The input impedance is determined largely by the dimensions of the antenna, the impedance of free space, the frequency of operation, and is the same during transmission and reception.

Radiation resistance is usually only mentioned with reference to transmission, and is a virtual resistance which is presented to the current from the transmitter as a result of the absorption by the antenna of the applied RF energy as radio waves are being radiated.

Wikipedia says "The radiation resistance is typically defined as the value of resistance that would dissipate the same amount of power (as radiated heat) as is dissipated by the radio waves emitted from the antenna, with the same input current passing through it."

For center fed lossless dipoles with antenna elements which have zero resistance, the real part of the input impedance is equal to the radiation resistance only for antenna lengths which are integral multiples of odd numbers of wavelengths of the frequency of operation.

For even multiples the relationships is more complex. 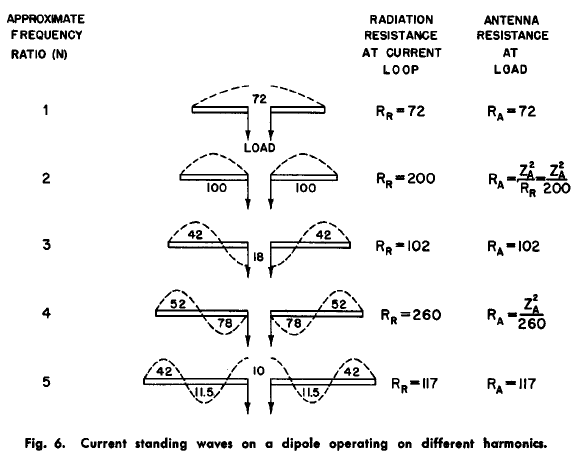 The typical dipole current and voltage distribution pictures you see everywhere such as the one in your question are very confusing and never explained well at all.

What you are looking at is a snapshot in time of the actual current profile in space along the antenna elements at the instant that the current is at a peak. This waveform is an interference pattern or standing wave which is produced by the initial application of RF energy at the feed point and the addition of that to the reflection from the ends. You cannot see the incident and reflected waves, each is obscured by the other, all you can see is the resultant standing wave, the amplitude of which is oscillating in time in sinusoidal fashion at the frequency of the applied RF signal.

What you say is exactly correct, for an ideal full wave dipole, if the input impedance is infinite then antenna current must be zero, that picture contradicts itself and just gives you the current profile assuming the input impedance wasn't zero and the length was one wavelength.

There are other explanations around which show a resonant series center feed half wave dipole with the voltage across the center feed points as always being zero. These are also confusing as the voltage across the center can't be always be zero otherwise you have a short circuit. They neglect to mention the fact that the voltage of the applied RF source at the feed point adds vectorily to that presented by the standing wave at the feed point, and the RMS value of this voltage never actually reaches zero, but is rather :

It is in fact the difference in phase between Vapplied and Vstandingwave, as determined by how far the ends of the antenna are away from the center feed point, which determines the value of reactance present in the feed point impedance, but that is another discussion for another day.

Not the answer you're looking for? Browse other questions tagged rf-power impedance-matching impedance radiation .

7
How can the voltage at the center of a resonant half wave dipole be zero if the input impedance is 75 ohms?

9
What's the difference between "minimum SWR" and "resonance"?
1
Impedance matching between antenna and load - Theory and Practice?
0
Input and output impedance of antenna/circuit: theory and measurement methods?
4
How can the impedance of a half wave dipole at its resonant frequency be purely resistive when the voltage and current are seemingly not in phase?
7
How can the voltage at the center of a resonant half wave dipole be zero if the input impedance is 75 ohms?
1
RF PCB Design Difference Between Controlled Impedance Track and Impedance Matching Circuit
1
Does the self inductance and velocity factor of the elements of a dipole antenna change its resonant frequency?
2
Why do ham radio operators say that a full wave dipole isn't resonant?
2
Ferrite unun transformer to match antenna resistance loads of <50Ω?