Is a 94' dipole antenna fed directly by coax useful for any particular known purpose?

I'm trying to figure out an old handmade antenna I picked up at a swap meet a few years back. It is a dipole (or "doublet"?) that is both made of coax but also fed by a length of built in coax. 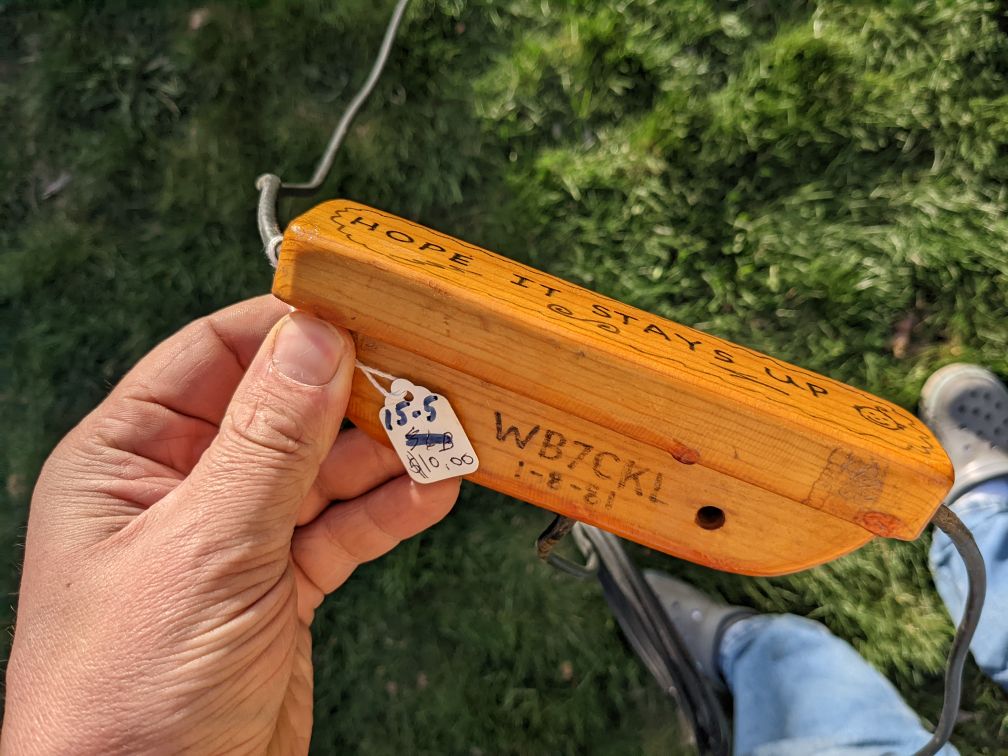 For the elements, it looks like someone has taken a single length of coax approximately 94 feet long and left its center conductor only as (?) a physical support. In the middle of this length, the coax shield was uncovered and a small section cut out, splitting the outer conductor into two separate elements.

This seems like an odd length â€”Â as a dipole this might be resonant somewhere in the ballpark of 4.98 MHz, at least using the 468 / frequency rule of thumb. That's getting towards the new 60m band, but there's a 1981 date written on the antenna, I'm assuming to commemorate its construction â€”Â long before the 60m band became available in the USA.

So I'm guessing instead this was meant to be some sort of multiband compromise antenna? 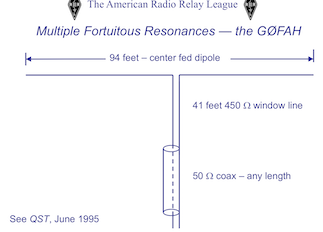 Whereas the G0FAH and most other "wrong sized" doublets seem to be fed with balanced 450-Î© ladder line, the antenna I "inherited" was fed with unbalanced 50Î© coax soldered directly on the feedpoint! [Also the G0FAH was apparently published 1995 but this antenna might have been built in 1981 alreadyâ€¦] 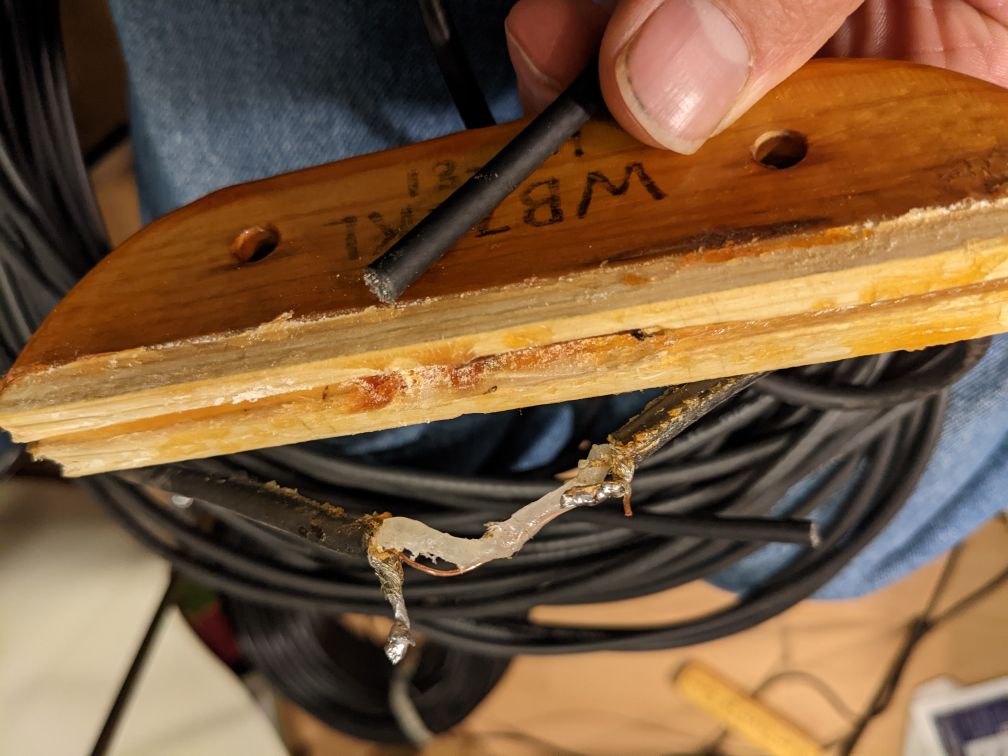 [In the picture above, I've already disassembled it for troubleshooting, and chopped the end of the feedline clean. Originally it connected via each of the two solder blobs remaining on the lower coax.]

Is this any sort of known antenna design? Might its construction be improved by at least a balun/choke at the feedpoint, or is it maybe a lost cause without the proper length of balanced line to serve as a transformer section?

Some more precise lengths in case it's useful:

(The coax is labelled as 58/U which I see is spec'ed to be 66% VF, so the numbers above might be a bit off of the physical length.)

Here's a quick-and-dirty VNA view of the antenna, before I took it apart, seen through the built-in feedline. Note that the trace was "flakey" due to what I think was a short within the feedpoint â€”Â the resonant dips would appear and disappear with the breeze: 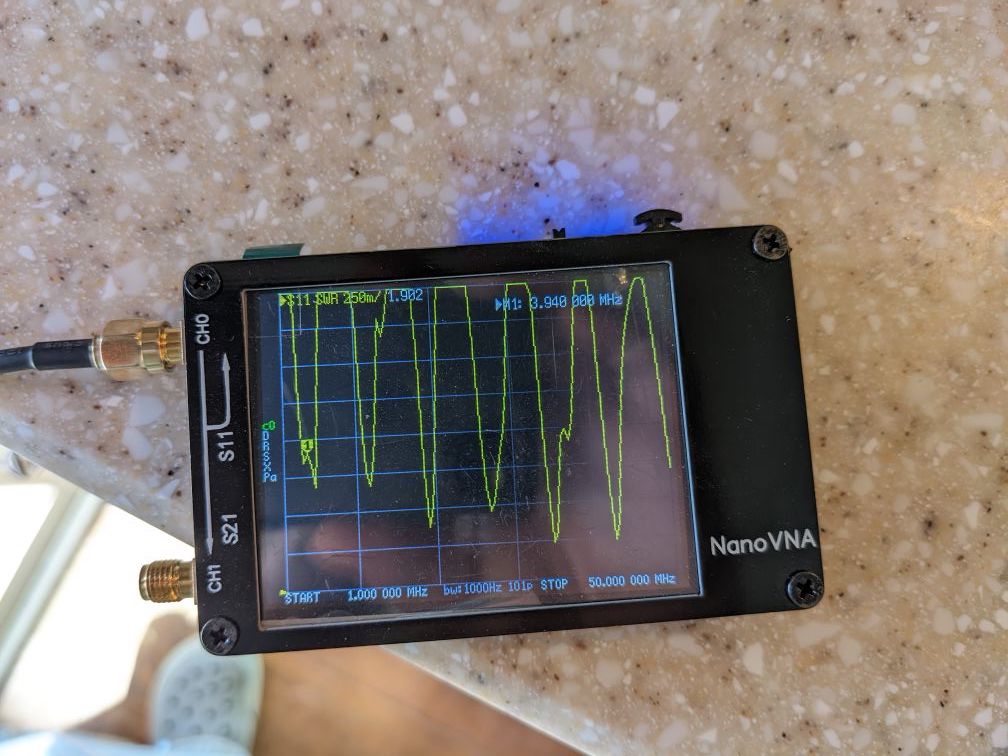 From your description, it looks like a form of a coaxial dipole or coaxial folded dipole, also called a "bazooka". The bazooka was developed by the staff at M.I.T. (Massachusetts Institute of Technology) for radar use, and featured later in QST Magazine published by the ARRL (July 1968).

The design was adapted for the ham and shortwave bands. The 94 ft. element section may only have been part of the radiating element. There may have been extensions off the ends, tuning it for 80 meters.

Google "coaxial dipole" for other info.

Just because someone made an antenna years ago with a ham call sign on it doesn't mean that it's a proper or valid design that actually worked.

This could just have been an experiment or a misguided attempt at antenna construction, or it could have been made by a child as a project at a scout group, or by someone who wasn't that bright or really drunk.

The fact that it has a ham radio call sign actually on it is probably not a good sign, it's a bit like in grade 2 when your mum put your name on your lunchbox just in case you lost it.

I wouldn't read too much into the design of this antenna.

39
Using a balun with a resonant dipole
5
Connect Printed Yagi-Uda Dipole Array with Balun to coaxial cable correctly
5
Dipole versus ungrounded end fed for HF RX
3
Using inner conductor of a coax feedline as an antenna
4
Which is better in my situation: Balanced dipole, or as much wire as possible in the air?
1
Is a "shorted" coax feedline ok for a G5RV type antenna?
3
What is the radiation pattern of an ~60 foot end fed wire antenna used for 40 meters?
2
Should I bother with a doublet if I can't go straight to the tuner with open wire?
0
Pondering variations on the vertical bazooka antenna
2
Is an off-center fed dipole (and/or doublet) inherently unbalanced?