I recently purchased a 4 element quad for 10 m from Lightning Antennas in USA. The antenna is designed to be mounted so the elements are diamond shaped. Notice in the picture how nice and straight the element wires are. 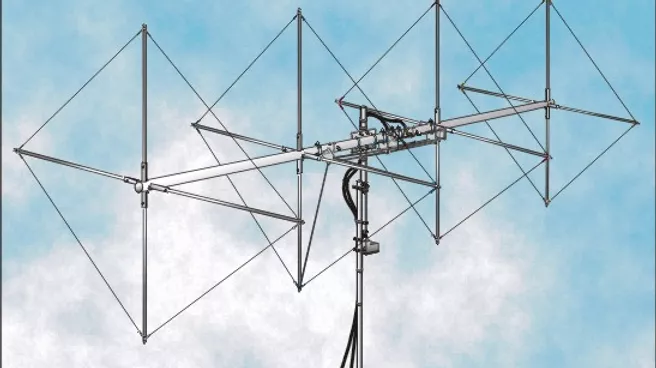 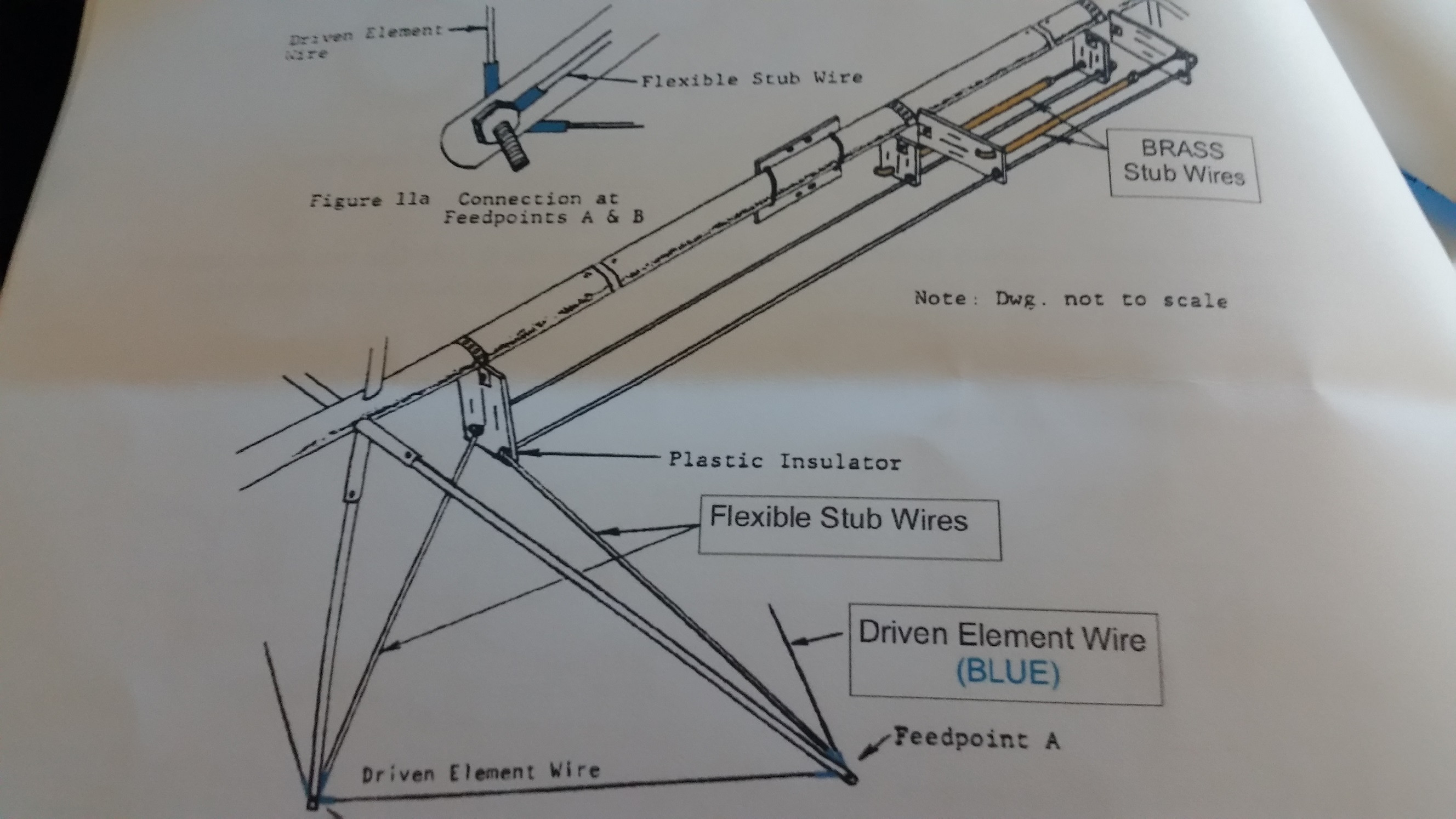 The stubs have an adjustable coax connection point at the ends to allow the SWR to be set, and the idea is to use an antenna switch to switch between the two so you can choose the polarization you want.

So the driven element has two approx 9 foot pieces of wire permanently connected, one at the side and one at the bottom, with the center of a piece of coax hanging off the end of each, all the time. The shield of the two pieces of coax are supposed to connect to the boom.

I can't see how this arrangement won't mess up everything about the quad driven element, including the interaction with the other elements and also the radiation pattern of the entire antenna, does anyone have any thoughts on this ?

Also, for transmit, won't the current on the inside of the coax split up between the boom and the outside of the coax and cause the familiar common-mode-current-on-the-outside-of-the-coax problem ?

So far the antenna has been an expensive disappointment as the spreaders aren't strong enough to support the copper quad wires supplied, so the wires can't be pulled tight to make them straight, and the wires hang loose and the antenna elements wave around in the slightest breeze all over the place. My understanding is that the dimensions for a quad are fairly critical and the large amount of movement will cause the radiation pattern, gain and other antenna properties to change all over the place also. When mounted on a mast the antenna looks like a 5 year has assembled it.

This picture above reminds me of McDonalds TV adds which show a luscious quarter pounder brimming with healthy goodness, when the thing you actually get looks like something that got run over by a truck and was then left in the sun for a few hours after which it died.

So far i'm very unimpressed, looks like i am sticking to my home made 3 element vertical yagi antennas mounted from the back in front of a metal pole for now.

This is a closed "loop driven element antenna system and voltage feed system" (see the patent) or, more colloquially, a "voltage fed loop antenna". And it is, indeed, intended to be driven this way. The patent specifically calls out using the boom as a sort of common connection so the chosen driven corner decides polarization.

I suppose the fancy stubs are instead of LC tuning. Or do they interfere with radiation on the boom? The mind reels. No, this is a gamma-match feed, one for each polarization (I assume). Similar to how regular quads and Yagis are often fed.

This is not really what we would call a "quad" but they are free to use whatever naming they want, I suppose.

Does it work? No idea. I'm not sure I understand how the boom wouldn't distort the pattern as soon as you get common-mode current running on it, but I cheerfully admit that I might be misunderstanding things. I was misunderstanding. Because this is essentially a quad or Yagi, the "ground" side of the feed-point is connected to the highest current node, so the fact that the boom is connected to the radiators doesn't matter.

The antenna came with balun (I assume) so I also assume there is both feed-point impedance matching going on there, as well an attempt to keep common-mode noise off the outside of the transmission line after the balun. Maybe the instructions tell you to coil up some of the transmission coax near the balun? No, the gamma matching should take care of impedance matching.

The build quality issues you mention seem to be echoed across the internet, if you trust that sort of thing. And I saw one quote from the owner of the company who claimed that the directors and reflectors are not sized because this would cause uneven wind-loading.

(As a grumpy aside, why do manufacturers insist on providing computer renderings of their antennas or artistic "20M Quad in the sunset" photos when what we want is the details of the boom connection, and the feed-points, and the spreader construction.)

Not the answer you're looking for? Browse other questions tagged antenna antenna-construction .

3
Dual-band yagi on single beam: element positioning
1
How to assemble an antenna (impedance matching methods)
5
How to adapt commercial VHF yagi for 2 meter amateur use?
3
How does an E-Z-O Antenna work and why does it appear in Wikipedia's article on quad antennas?
1
2m 5-element yagi with staggered driven elements
3
UHF cubical quad VNA analysis interpretation
3
Dual Polarization Yagi Antenna for 10 m
1
What is the best way to allow for SWR adjustment for a cubical quad?