How should I think about "extra" impedances inserted within/across a transmission line?

The "un-intuitions" I have are related to inline components like a feed-through terminator with a resistor from (in coaxial terms) the center conductor to the shield:

…and/or a DC-block coupler, which is basically a capacitor interrupting the center conductor:

Now I get in broad terms that e.g. the feed-thru's resistor essentially terminates the coax with a "perfect load" at that point, or that the DC-block's capacitor looks like a good conductor to high frequencies and a bad conductor to low frequencies.

[^^^^ n.b. the above example questions are NOT my core question here!]

…I don't know how to think about them in terms of transmission lines!

Is there any particularly helpful way to analyze these sort of random "odd spot in the coax" things?

To solve the first circuit:

The second question can be solved in the same way. You're correct, the impedance of a capacitor is dependent on frequency, but in practice if the capacitor is large, the impedance will be effectively zero for all frequencies you're interested in. For example, 10 nf at 7 MHz is $2.2 \Omega$ and at 145 MHz is $0.11 \Omega$, neither will have any significant effect on the line if $Z_0=50\Omega$

Here's a circuit for the first one.

…that it looks like: a filter! Especially if you take the "resistors" in my diagram as actually being "impedances" i.e. capacitors/inductors at a particular frequency.

That certainly could explain both of my example questions, e.g. ideally:

So I still don't really "get" transmission lines, and this is hardly a complete answer, but in an interesting turn of events I found these diagrams on Wikipedia: 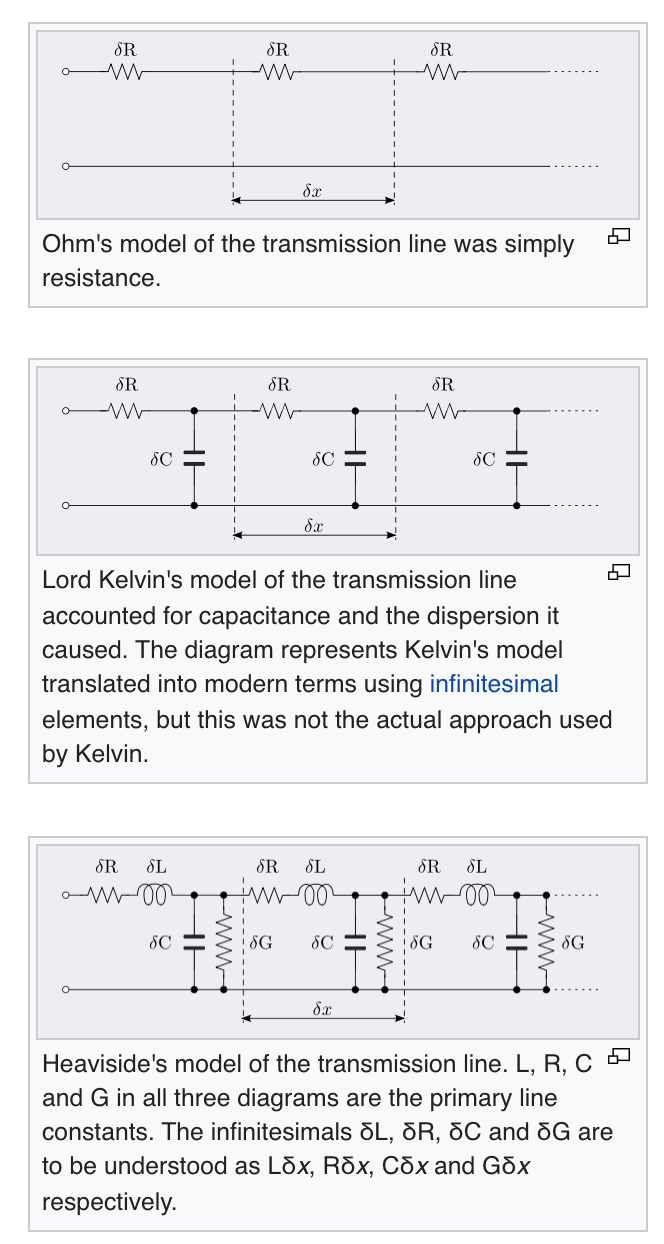 So, perhaps, every spot in a coax is something of a tiny filter too?!

Not the answer you're looking for? Browse other questions tagged coaxial-cable transmission-line theory .

6
Power dissipation in transmission lines?
2
What is a "feed-through load" and how does it work?

10
How do I design a round or square coaxial transmission line to have a specific impedance?
1
There is no reverse flow of energy in a mismatched transmission line, is this correct?
7
Understanding coax radiation and "current on the shield"
3
Using inner conductor of a coax feedline as an antenna
9
Does a balun need to be made with coax?
0
Transmission Line Model of Co-ax Lines
4
Is RF current always confined to the inner diameter of a braided outer conductor of coaxial cable?
1
Exactly why do some SWR meters give a changing reading depending on the length of coax used to connect to an antenna?
0
Simple Longwire/Dipole Antenna design
2
Apparent Paradox about wave reflection in a transmission line?