I am planning to move into a new apartment, and of course would like to install a HF antenna there, on the roof if possible.

Today I noticed a small Yagi antenna on the roof of the building , more than likely for VHF, but more interesting, seems to be some massive long wire antenna coming from the roof which spans across multiple buildings as shown in the photos below.

Closer inspection, it looks like ladder line of some sort. Would anyone know what exactly this is? I have a feeling that I may be unlucky and already there is a HF HAM operator living the building.

However this "wire antenna if it is" spans across multiple apartment buildings, so i'm not really sure what i'm looking at here:) Thanks in advance. 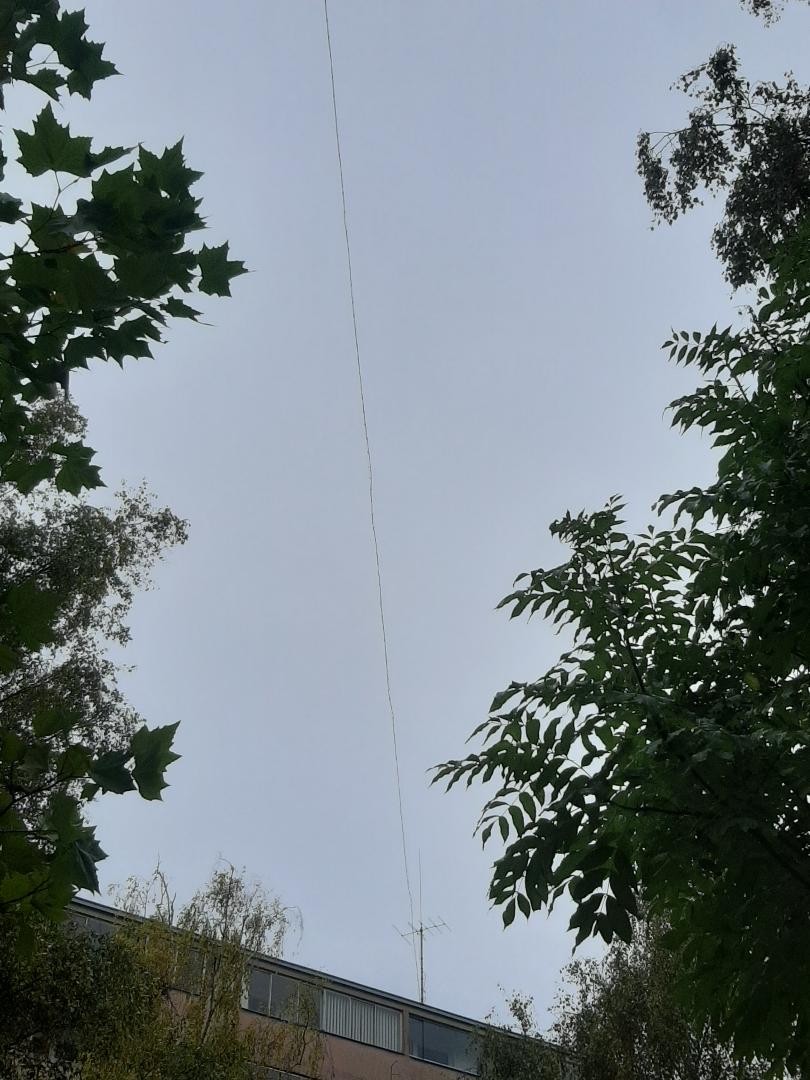 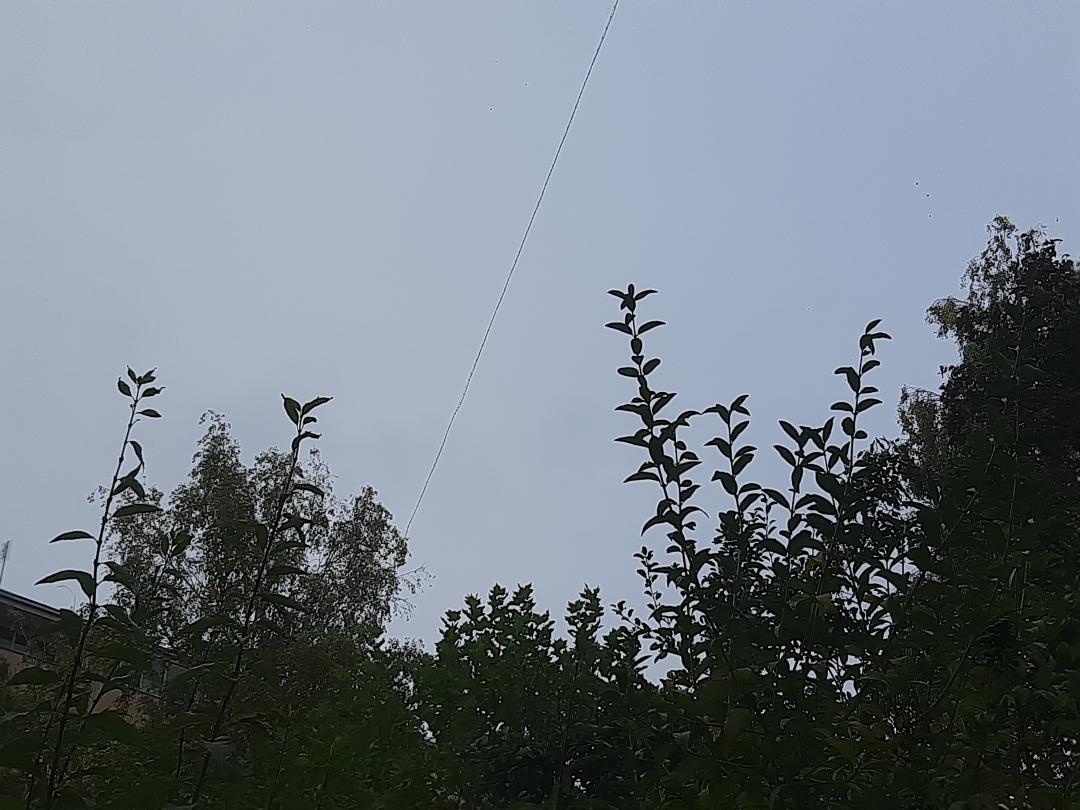 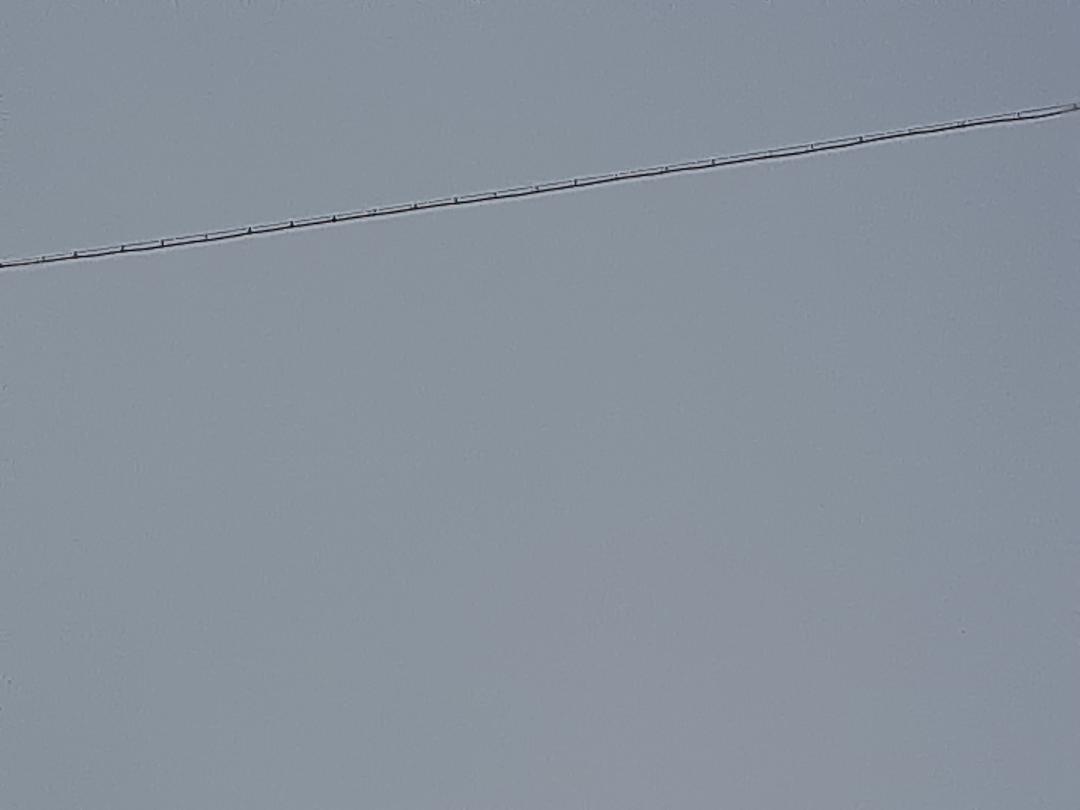 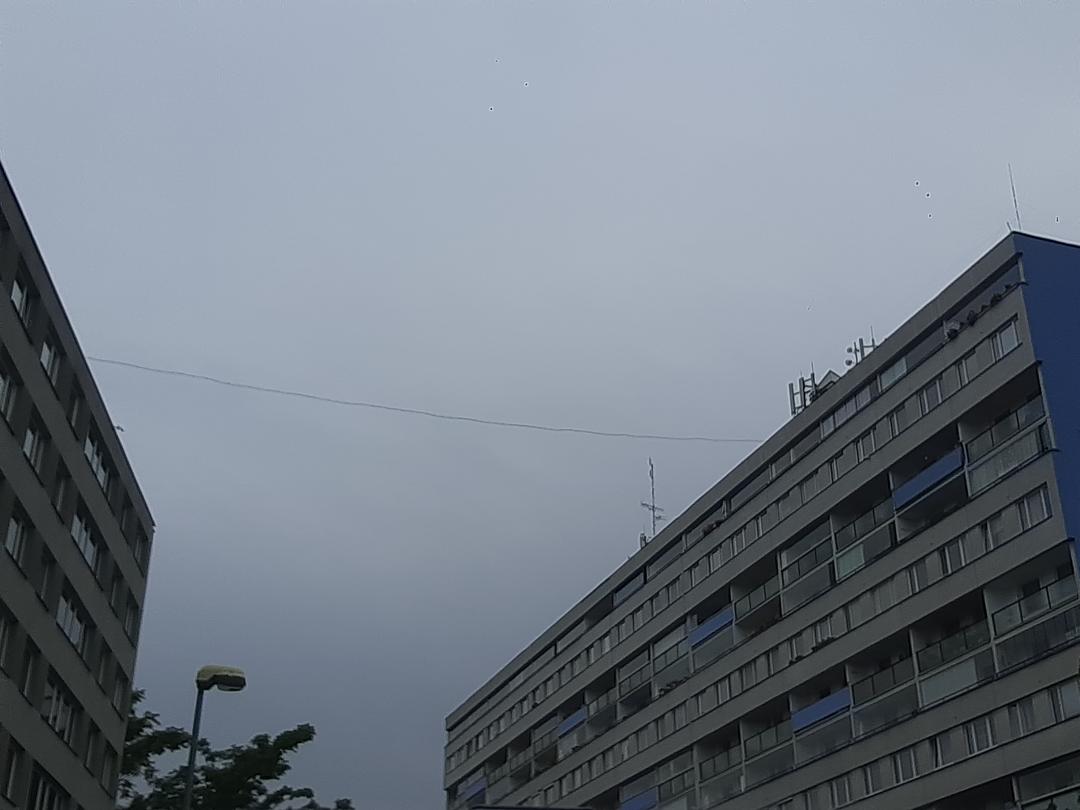 It looks like a fibre or telephone cable strung between buildings.

It sets a good precedent for setting up your antenna though - if you can get access to the other rooftop at night, and a catapault or fishing rod. Make it fairly official-looking, with some large bolts and a labels with bar codes and lots of numbers.

The cable strung between the two buildings has two parts, a strong wire probably made of stainless steel or similar, then you can see some form of cable, as Tommexus said it's probably fibre or telephone cable, or maybe coax, hanging from the wire with lots of evenly spaced cable supports.

The steel wire is used to provide a strong support between the buildings and acts as a strain relief so that the cable or coax isn't supporting it's own weight by itself, which protects the cable or coax from being stretching or damaged, especially at the ends.

The pictures look a lot like post-socialist country big city residental area. It may as well not be, YMMV.

The Yagi looks like an abandoned old analog TV antenna. Most ham installations use vertical polarization in UHF and this one looks pretty much horizontal.

The cable between the buildings is not an antenna at any rate. This is a communincations cabe of some sort. It may or may not be related to the cell tower at the roof of the building on the right on the last photo.

No sane antenna can work together with a weight-bearing wire.

Some 30 to 10 years ago this is how we got cable TV (75 ohm coaxial) and internet connection (FTP or SFTP). Just before the local authorities got enough power to irrevocably ban the cables hanging between the residental buildings, cable TV / internet providers started experimenting with optical connections that were much safer in regard to static and lightnings. Here and there these wires still hang because there is no one willing to deal with them.

In small communities this is how internet and cable TV work even today.

In general, the picture looks like no one will vigorously object an HF wire antenna. Or two. Luckily, it is 2021 and you won't break anyone's TV set.

The ladder line looks like a cable, as several people pointed out already.

As for the Yagi, it does look like a TV antenna, but there's a simple way to tell if it's currently used for ham radio or not: Does it move?

A ham radio VHF antenna is typically used in multiple directions. If you come back and see it's been turned, that's a pretty good sign there's a ham about!

"But what if it's used by someone who always connects to the same repeater?" you might ask. A good question but, at least in my parts of Europe, repeaters normally use vertical polarisation. For simplex traffic on SSB or CW over hundreds (or thousands) of kilometers, however, most VHF antennas are horizontal. (So, at least in this part of the world, @fraxinus assertion about polarisation is not that simple to make.)

It's of course possible that it's a ham radio antenna not currently in use. If so, it will not expose itself by moving. If you get axcess to the roof however, or a close by roof higher up, you could easily check if it has a rotor or if it's mounted statically. This will give you your answer.

Not the answer you're looking for? Browse other questions tagged antenna hf wire-antenna yagi end-fed-antenna .

2
What antenna to use for medium frequencies in an apartment building?
11
What would propagation look like on Mars?
3
Slot antenna for 2 meter mobile
5
What are these antennas used for?
0
Strong but unreadable signal received on 2m FM voice, transmitter less than 2km away. What could be the cause of the readability problem?
5
What are these antennas?
4
QRN: How to chase down a solid S9 noise floor on 40m only
1
Common-mode choke (CMC) hurting my SWR. Live with it? Drop the choke?
4
Mounting a hex beam on top of a high urban building