How to Evaluate Antenna Data

I found some data on antennas that had been tested for a specific radio. I'm trying to decipher what this data means and how one would go about gathering it. Are there any good resource for learning how to read and understand this data? 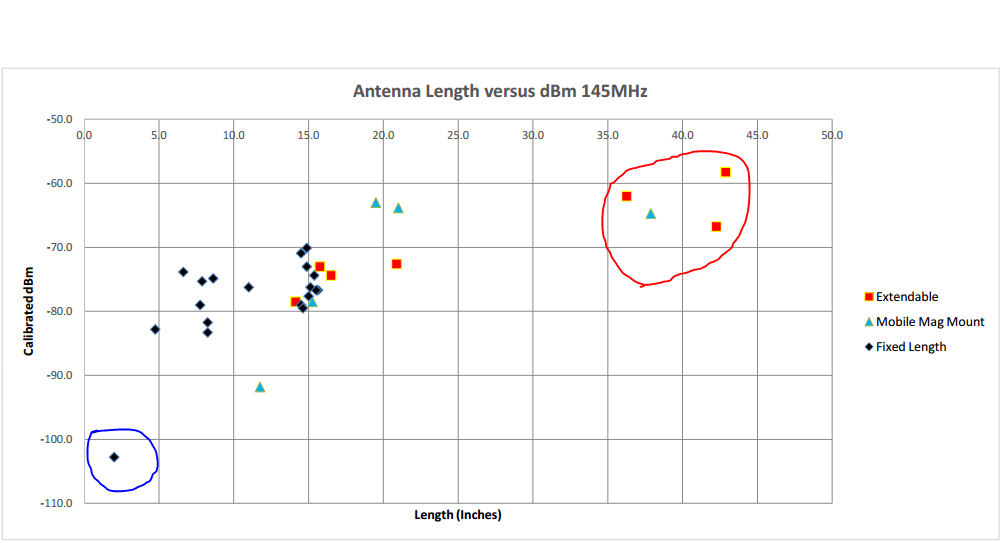 What common methods/software exist for obtaining this kind of data?

Without a lot of information on the person's testing methodology, I'll assume that dBS9/dBm refer to the signal strength received by the radio the antenna being tested is attached to.

There are several different ways to interpret what's in the graph. You could ask "For a given antenna length, which antenna performs best" (look at the cluster around 15 inches for example), in which case it would be the one that gives the highest dBS9/dBm.

You could also look at the graph as one of those cost/performance type graphs. If you define your criteria as "short antenna and high dBS9/dBm", then the best antennas would be towards the upper left portion of the graph while the worst ones would be in the lower right portion.

"Operating optimally" requires you to define what "optimally" means, and this is going to be different for different circumstances. Do you want the highest dBm? Shortest antenna?

For just received signal strength, the ones you circled in red are great performers. Do you want to be carrying around a 35-45" antenna with you though?

Conversely, the one circled in blue is a great antenna if you want something short, but receive performance kind of sucks.

For the first question: DBS9 refers to the strength of a received signal. S Units are generally considered to be fairly arbitrary, but the IARU Region 1 recommends a S9 reading be -93 dBm in VHF frequencies higher than 144MHz, which is equivalent to 50 microvolts at 50 Ohms.

Acknowledge that the thread is a bit old, just some information for anyon ending up here with the question regarding dBS9. When testing antennas, on must set up a reference system. This is usually don by having a Tx/Rx system equipped with equal antennas. Then the signal strength is measured, and the result refereed to as dBref. In the mentioned article this becomes DBS9.

The signal measured for another antenna will then be compared to this reference. For instance a antenna with a DBS9 of +3 has 3dBm better sensitivity than the referenceat the given frequency.

Regarding dBm and messuring in decibel. Usefull information can be found in an article by Rohde&Schwarz "Everything you ever wanted to know about decibels but were afraid to ask… " (Google know where to find it)

5
How do I determine antenna spacing?
10
How does a "chip antenna" work?
6
How to increase antenna aperture?
8
How does a Dual Band Handheld Antenna work?
2
How can I render my 2.4GHz antenna directional?
2
High data rate on HF & MF bands
9
How does a slot antenna work?
7
How do I identify a genuine Nagoya antenna?
1
Passive receiver power needs & data rate
0
How does a smartphone FM antenna work?