I was building the superhet receiver for ham radio. But I seem to have got stuck at the demodulation stage.

I take intermediate frequency of 455 KHz.

Now at the demodulator, the 455 KHz wave is needed to be demodulated. For this particular example, the oscillator frequency I need to inject in demodulator is 456 KHz (to recover 1 KHz speech).

Firstly, am I going wrong somewhere till now?

Secondly, in real situation, I would not be knowing this much information. The only thing I would be knowing is that my Mixer oscillator is set to 14.706 MHz. So the Rf freq must be 14.251 MHz. Now here is the problem:

In other words, how do I know what frequency to inject in the demodulator? Do I just keep tuning the oscillator attached to the demodulator until the combination is struck?

If yes, then wouldn't finding any random person over this wide range of band quite painful; First you set the Mixer oscillator to some value and then you keep tuning the demodulating oscillator over the entire 3 or 4 KHz bandwidth until you find someone?

3) If you want to hear the whistle at 1kHz, you will have to insert a carrier at 10.000 MHz again. Any other frequency will change the tone of the whistle. (This is how direct conversion works).

This is not overly complicated - in a superhet receiver, you will have a carrier oscillator at 0.500MHz, a tuning oscillator which varies in the range 0.5 MHz below the desired band, and the filter as described in 5).

And yes, tuning SSB is not easy - you have to be at less than 100 Hz (!) of the correct frequency to have an enjoyable voice reception. The problem isn't so much with a one-note whistler, but if (s)he whistles a melody, all notes will be off, making it sound very strange.

Note that 'demodulating' SSB is just mixing frequencies, just like mixing from 10.000 to 0.500 MHz - an SSB demodulator is just a mixer.

I would suggest looking at a couple of sites:

At the IF stage, you can decide on the selectivity by adding band-pass circuits (e.g. 3kHz for SSB and 500Hz for CW).

For SSB demodulation, you also need to inject a carrier with another oscillator (the Beat Frequency Oscillator). There's another useful description and diagram on this page:

Going back to your example, your demodulator will always be set to the IF of 455kHz, and does not need to vary. The output of the demodulator is audio/speech/morse code/etc. 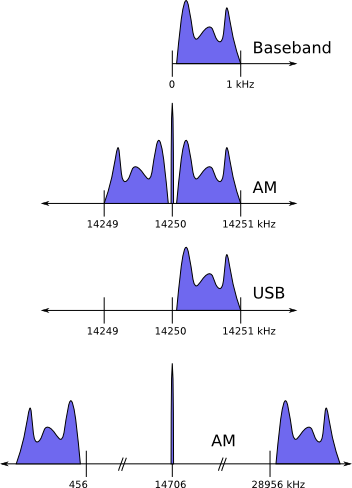 You begin with your baseband signal, some voice going from (almost) 0 Hz up to 1 kHz.

Next, when this is AM modulated at 14.250 MHz, we get a carrier at that frequency, then two sidebands above and below it that are just like the baseband signal.

But, this is USB, so the carrier and the lower sideband have been removed (somehow) by the transmitter. So really, all we have is the baseband signal, shifted up by 14.250 MHz. Our goal is now to shift it back down. However, remember where the carrier was. Where the carrier was corresponds to what we want to eventually be 0 Hz when we demodulate the signal.

So, you mix this with an LO at 14.706 MHz. You can think of this as AM again, only the sidebands are very much more spread apart. The result is the last figure.

The "carrier" frequency of the signal, the part that we eventually want to land at 0 Hz, is now at

The upper end, which eventually should end up at 1 kHz, is at

Usually at this point, after going through the IF filters, you would mix again with a 456 kHz BFO, and that will take the lower sideband you generated in the first mixing stage and convert it back down to baseband.

The audio bandwidth (you specified 1 kHz in your example) isn't really relevant, except to the filtering you do. If the audio bandwidth had been 4 kHz, then the BFO would still be at 456 kHz. The only difference is that the image you generated in the first mixing step would extend farther down, and you'd want a wider filter to accommodate that.

Not the answer you're looking for? Browse other questions tagged receiver frequency oscillator ssb .

3
FFT frequency shift corrupting phase
4
Is this simple description of SSB correct?
1
overly large bandwith for a FSK signal?
1
SDR demodulation of SSB
8
How to tune an FM transmitter to a specific frequency?
8
What exactly is a "balanced modulator"?
2
Frequency Display for Old Tube Radio
0
How to make simple AM detector using an LED?
3
How can i adjust the IF strip in a single conversion SSB receiver which has a product detector?
3
Why is my experiment to produce 3rd order harmonics by saturating a receiver not working