Is this true about ferrite loop antennas?

There is an article on wikipedia about loop antennas.

It shows like an AM radio's antenna with the ferrite rod and says this:

This greater conductance channels thousands of times more magnetic power through the rod, and hence through the loop, allowing the physically small antenna to have a larger effective area.

Because, as the article says, the magnetic permeability of the ferrite rod is much higher than that of air, and thus it concentrates the magnetic flux from a large area around the antenna. 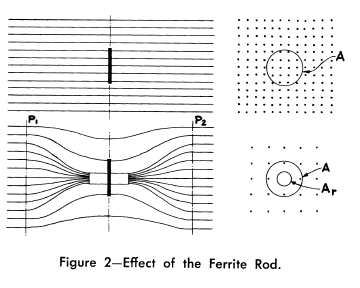 This has the same effect as making the loop physically bigger (neglecting losses in the ferrite, which aren't large at AM broadcast frequencies).

If you were to optimize for this energy capture, perhaps putting this antenna very close to the transmitting antenna with the objective of capturing all the transmitted power such that nothing else can receive it, you will have made a transformer.

Nearby antenna elements do affect each other. Consider a Yagi-Uda. Pointed in the "wrong" direction, the director and reflector elements will reduce the EM power that the driven element receives from the impinging RF field.

However, a parasitic loop can often increase the power to a nearby small radio antenna, rather than steal (or "zap") power.

The magnetic field concentration caused by a multi-turn loop inductance, whether with a ferrite core or not, concentrates the EM field lines not only inside the loops of the coil, but in the total virtual aperture area or volume nearby. All nearby EM field lines (in the entire neighborhood) will be distorted towards the loop inductor and/or volume of higher relative permeability.

There are inductor coil antenna products that take advantage of this. You merely put a tuned passive loop antenna near your small receiver's internal antenna to increase the received signal level. Here's an example of one by Kaito, a "Tunable Passive AM Radio Loop Antenna", but there are other vendors of similar products: https://www.amazon.com/gp/product/B001KC579Q/

If you are wondering where the "added" power comes from, consider it stolen, not from nearby receive antennas, but from the transmitter's antenna, due to more efficient inductive coupling between the two stations. All the EM field lines will be pulled closer, not just the ones near the receive antenna ferrite core.

Remember, an antenna does not amplify power. It just gathers it. If it has gain (or equivalently, directivity), it gathers more from a specific direction and less from others. In this case, the core increases the virtual aperture so it gathers energy from a larger volume of space.

The antenna is not 1000 times more powerful. It gathers energy from 1000 times more volume. And that may seem like a lot, but think of it as being 10 times larger in 3 dimensions, and that isn't that much larger. (Actually, it doesn't increase volume evenly in all dimensions, so this is an oversimplification.)

Not the answer you're looking for? Browse other questions tagged antenna ferrite loop .

15
How does one read a ferrite datasheet?
2
Ferrite Rod Price Differences
7
Ferrite rod or core permeability determination
5
Is this the Correct Ferrite Core to Reduce RFI as a Common Mode Choke?
3
How does this 3 dB splitter/combiner work?
3
Interpreting (noise) signals from a small untuned shielded loop
5
Why are loopstick ferrite antennas commonly wound with Litz wire?
5
How to meassure a ferrite using a VNA?
0
Is it necessary to have a "loop" antenna to make the primary antenna work?
3
Ferrite choice for fan dipole