Do modern radios and power supplies require grounding for safety?

Do modern radios require grounding to be used safely? All I am concerned about is not getting electrocuted when I attempt to use the radio. I'm not concerned with RFI or Lightning safety at this point in time.

The power supply apparently has a ground connection as well, even though it uses a standard AC 3rd prong ground power cable. Is this one different or required as well? 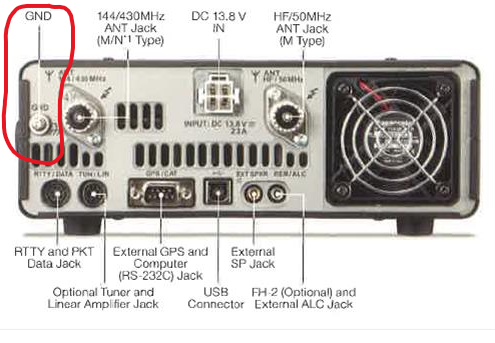 The OP states clearly that the only interest is safety. That is how I answer the question.

In most countries there is a category of equipment that is double insulated. If your radio is connected to a double insulated supply then it should be considered safe from an electrical safety perspective. There is little possibility of a live cable internally touching a chassis which is connected to equipment that you are touching. There is therefore little possibility of electrocution.

In the circumstances that you talk about with the help of the picture, the power supply is grounded through the mains power feed. The power supply can be considered safe because if a live wire comes adrift for example inside the power supply and touches the chassis, the protection circuit , often a fuse, should blow, avoiding any risk of electrocution.

Consider the case where your radio is connected to that power supply and the negative rail is connected to the power supply ground internally. The equipment would be safe. Because like in the previous case, if a live wire comes adrift and contacts the chassis the protective fuse will blow. Negligible possibility of electrocution.

Consider another case, where this time the negative rail is not connected to the power supply ground the chassis of the radio will not be grounded. This is still safe since there is no high voltage made available to the radio that may contact the casing of the radio. In any case, if a live wire comes adrift and touches the chassis, the fuse will blow.

For completeness, the question might therefore be asked - why are there grounds lugs on the power supply and the radio? This is a wholly different area but please note that in some countries with some kinds of premises wiring it can actually be unsafe to connect this lug, or any part of any antenna, to an external ground such as a ground rod outside. But this is outside the scope of your question as are all RF noise and lightning concerns.

I'm going to say "Yes," but refer you to the ARRL for a discussion that you might review to make your own decision.

Safety is potentially a factor, but a bigger concern is that the electrical ground for your house isn't ideal to use to ground your entire radio and antenna system. Doing so can lead to difficult to diagnose noise issues.

Certainly, the radio will be electrically grounded to the house ground too, but the secondary ground serves to ground the radio chassis and antenna to a common ground. Most of the hams that I know hammer a ground stake into the ground nearby their shack and use that to create a separate ground for everything radio related.

In the event of a lightning strike on your antenna, assuming you don't have a lightning arrestor, if you are using the house ground all of the energy still passes into the house (albeit, the ground), while the separate ground stake should almost certainly be a much shorter path.

The way I look at it, a well-constructed amateur station can have as many as three ground systems (which should be connected together): an electrical safety ground, an RF ground, and a lightning ground. When you talk about grounding something in a station, it helps to specify what the ground is for, or what hazard you're trying to protect against.

If your antenna is unbalanced then some of your transmit power can be sent back to the transmitter through the coax braid. This is what is known as "RF in the shack". I've heard of extreme cases of operators getting "stung" by RF when touching the radio while transmitting. These days most people advise a good balun as the best way to solve such problems, which is supposed to present a balanced load to the transmitter even when the antenna is unbalanced, rather than an RF ground connection, which is difficult to arrange in many situations.

The reason that there is a separate ground connector on the back panel of the radio is because many operators want a convenient way to connect their radios to RF ground, as a best practice that was often promoted in decades past, and to reduce "RF in the shack" problems. Or they want a connection to a lightning ground system, to better protect the radio from a nearby lightning strike.

To sum up, if you have a properly-wired outlet, then you shouldn't need to worry about electrocution from the electrical mains. If you have a balanced antenna or a decent balun, then you shouldn't have to worry about getting zapped by RF in the shack. The purpose of the ground connector on the back panel is not to keep you from being electrocuted, but rather to connect the radio to an RF ground or a lightning ground.

If a radio is powered by 13.8V DC and it doesn't have vacuum tubes in it then it doesn't require a ground for safety. The ground in a radio is only required for safety when there are voltages in the radio that are dangerous, such as the mains supply or plate voltage of a valve, so that if something with high voltage accidentally touches the metal case inside for example, the high voltage will short out to ground and blow the fuse, instead of allowing a high voltage to be present on the case which is dangerous.

A power supply for a radio absolutely must have a ground for this reason if it's powered from the high voltage mains supply.

Note that the requirement for grounding has changed over the years.

An old timer ham radio operator will insist that everything MUST be grounded or you will DIE, this is because years ago most ham radio equipment contained valves with high voltage plate supplies which operated at low frequencies which required large antennas. Valve equipment should be grounded for safety and vertical antennas for low frequencies need a good ground to operate properly.

Today, most ham equipment is transistorized, and those radios which don't have a mains supply in them don't need a ground for safety, and higher frequency beam antennas and loaded vertical antennas with a coil at the base for example don't need a ground at all to operate properly.

Modern QRP rigs can be operated completely isolated from ground (e.g. battery powered on a wooden picnic table (and insulated counterpoise wires if any). A/C connected power supplies can contain or be run through galvanic isolation transformers.

However, depending on your legal jurisdiction, the A/C safety rating on the metal chassis of some agency regulated products may be conditioned on connection to the A/C outlet 3rd wire ground or electrical panel ground. An additional ground connection might improve safety if the A/C outlet is or somehow becomes faulty.

Without a shorter lower impedance ground connection, your building's A/C wiring might become part of your antenna to some degree, which could possibly cause EMI problems with any other appliances on those circuits (e.g. computers and peripherals), as well as distorting your antenna pattern.

24
How can I protect equipment against a lightning strike?

13
When is RF grounding necessary, and when is it not?
1
Does a station that's only going to receive require grounding
2
What would be the easiest and most cost effective ground system for a startup UHF/VHF station
4
why do some radios have two fuses in the power leads
1
Grounding plan for new ham shack - good/bad idea?
9
overhead power-line safety
1
Grounding for an upper floor shack
3
Grounding for lightning safety - upper floor (UHF/microwave antennas)
2
Where to disconnect feed line for lightning safety?
3
What safety procedures should be followed when developing and testing a high power amp?