Why are an antenna’s nulls sharper than its lobes?

Why, for realistic directional antennas, are its nulls sharper (deeper, narrower, etc.), than the radiation pattern’s lobes (local angular maxima)? Is there some physics or mathematical geometry to EM fields that requires this to be true?

Or is there a some way to do the opposite, make an antenna with sharper (narrower) lobes than nulls?

Its all in the nature of nulls:

Or, if you wish, imagine a sinusoidal wave whose average value is 1.0, and whose peak is also 1.0. I've chosen a frequency of 1 Hz, but that's not really important.

Even though the subtraction goes to zero very smoothly, the approach to zero is very sharp, which can be seen on a log plot of the waveform. The approach to the 2.0 peak is certainly not-so-sharp. 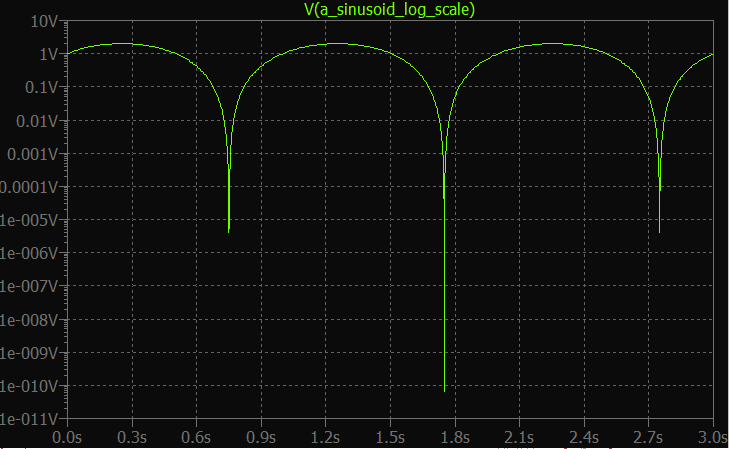 Now let's consider the math of wave interference a bit with a simple example. Wikipedia has the full derivation, but the tl;dr is the addition of two identical waves differing only in phase by $\varphi$ is:

That is, summing two sinusoidal waves identical except in phase together, the result is a sinusoid of amplitude proportional to $\cos(\varphi/2)$.

A quick graph of that:

Antenna patterns do not usually distinguish polarity, but sometimes you find one that does and you will see each lobe alternates in polarity. What's happening is for the purposes of the radiation pattern we really just care about the absolute value of the amplitude of the resulting wave. So now, a graph of $|\cos(\varphi/2)|$:

Now one sense of "sharp" means an abrupt change in direction. > is sharp. ) is blunt. You could say something is sharp if there is a discontinuity in the derivative. The nulls certainly look like they do, but if you consider the polarity of the lobes, there is not actually a discontinuity. That's just an artifact of taking the absolute value of the amplitude for the purposes of the polar plot.

Another sense of "sharp" is "not wide". The reason it's hard to make very narrow lobes is mathematically similar to the reason a pulse train has infinitely many harmonics. Our simple example considered only 2 waves from 2 antenna elements, but if you want more complex antenna patterns you can create them by adding together spherical harmonics just as you can create any periodic waveform by adding together harmonically related sinusoids. However, the number of antenna elements, and thus the number of spherical harmonics that can be added together, is limited by practicality.

Well, antenna gain plots are logarithmic, and $\log(\sin^2(x))$ hits negative infinity for every zero transition of the sine's power, so while the power of some directivity pattern may actually touch its minima as gently as its maxima (it depends on just what kind of transition is there, though), in a logarithmic gain plot you get to see a lot more drama.

As @glen_geek points out in his answer, "getting to zero" is pretty definitive.

If you'll accept "very narrow lobes" as an acceptable interpretation of "sharp lobes" then I'd add:

Antenna systems can achieve a very narrow beam-width with some of the following techniques:

Not all of these techniques are feasible or scalable at all wavelengths, but that's another question.

A directional antenna, for example, will often have two symmetrical or mirror-image components which radiate or receive most strongly in different directions, but operate out of phase. At a direction halfway between their peak directions, the effects of the two components will cancel out almost perfectly. Changing direction will cause one element to become slightly more effective while the other becomes less effective, thus creating an imbalance which is much more noticeable than the change in signal strength from either side would be in the absence of the other.

18
Why do folded dipoles have greater bandwidth than ordinary resonant dipoles?
0
What parameters are currently possible in a directional antenna less than 5mm long?
4
How can the impedance of a half wave dipole at its resonant frequency be purely resistive when the voltage and current are seemingly not in phase?
5
Are there reasons why a receive-only wire antenna should not be λ/2 in length?
4
Why do horizontally-polarized RF waves reflect better off ground than vertically-polarized waves?
3
Are there any antenna that can create disk like lobes?
5
Why are loopstick ferrite antennas commonly wound with Litz wire?