How to take to account impedance mismatch losses when cascading 2-port networks as RF System?

I'm trying to learn how to correctly calculate (cascade==RF system cascading) the connection of 2-port networks, taking into account mismatch losses. For example There is a first 2-port network, its S parameters at 10GHz, 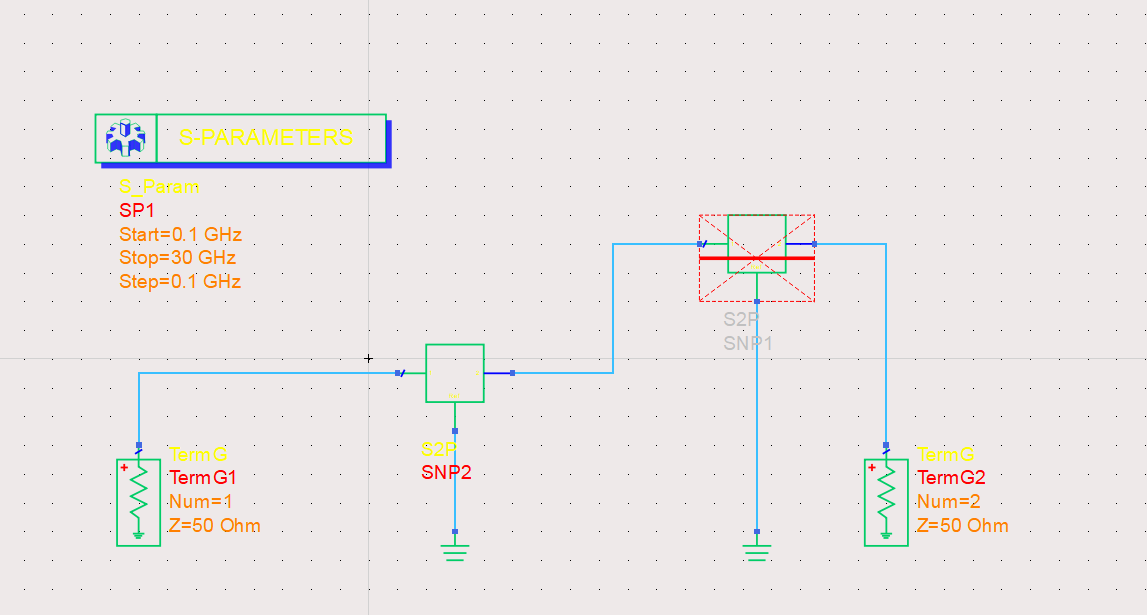 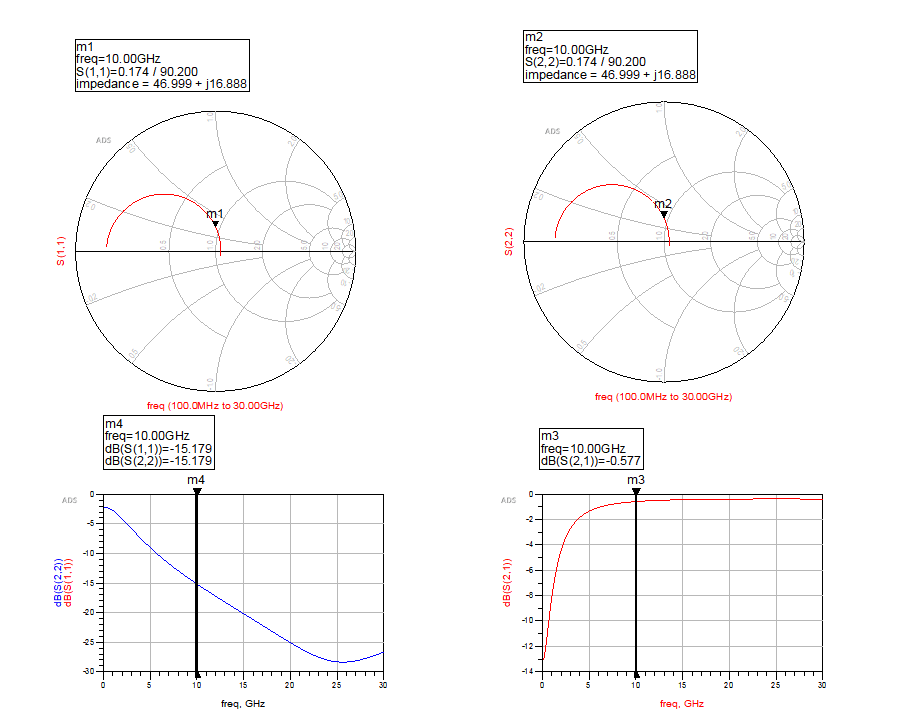 And a second 2-port network. 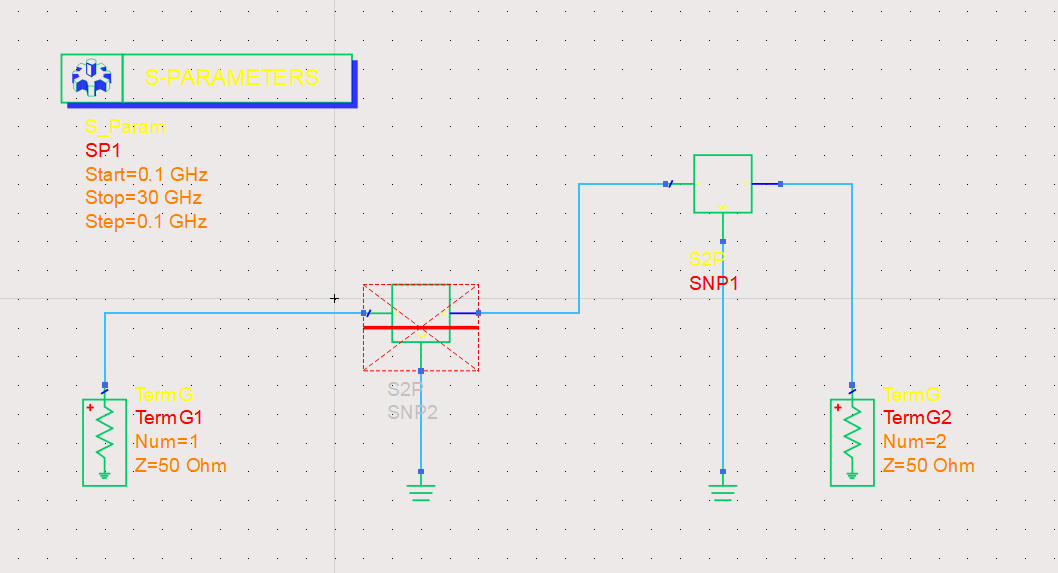 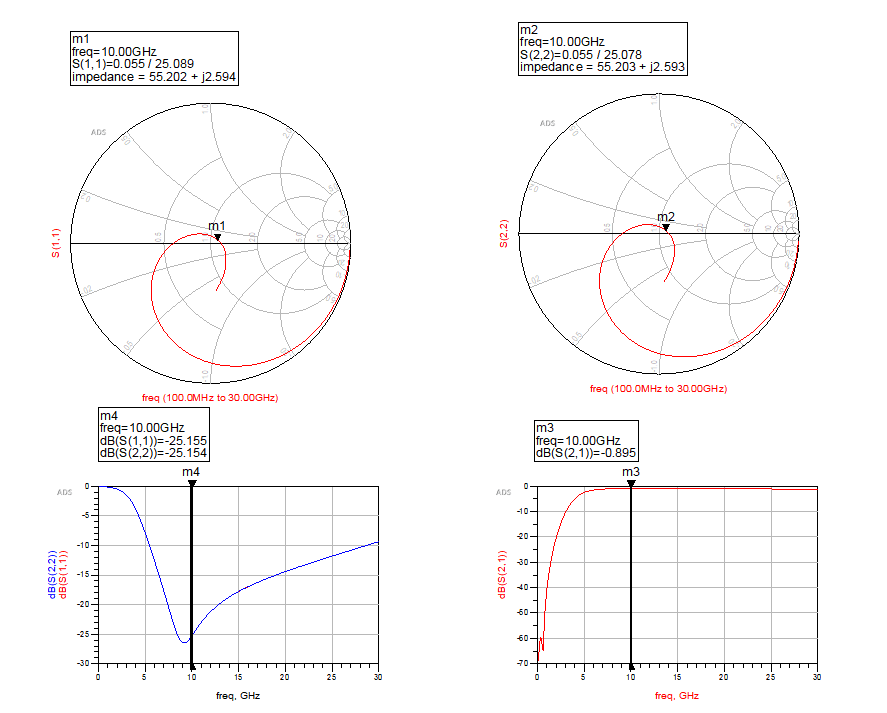 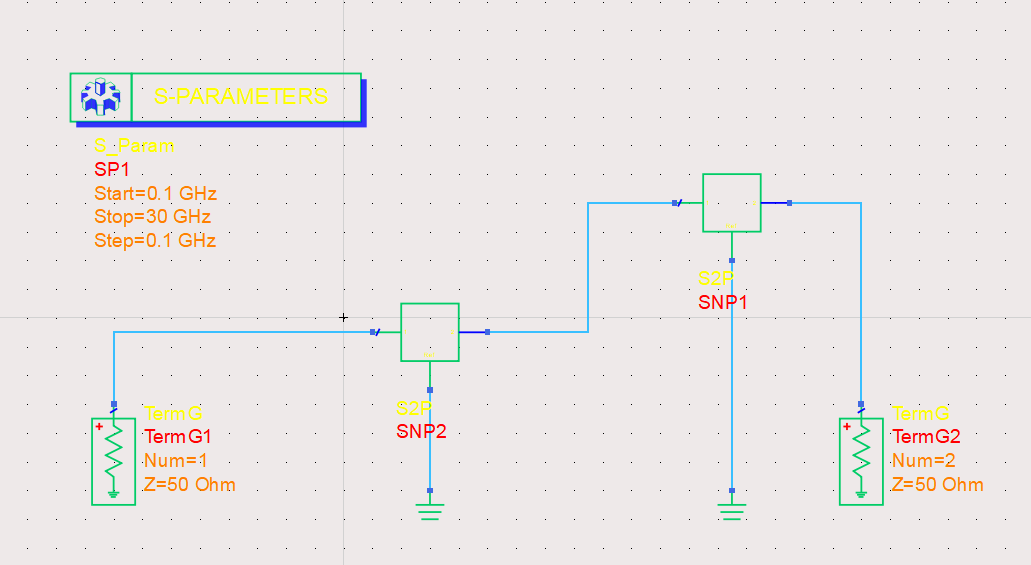 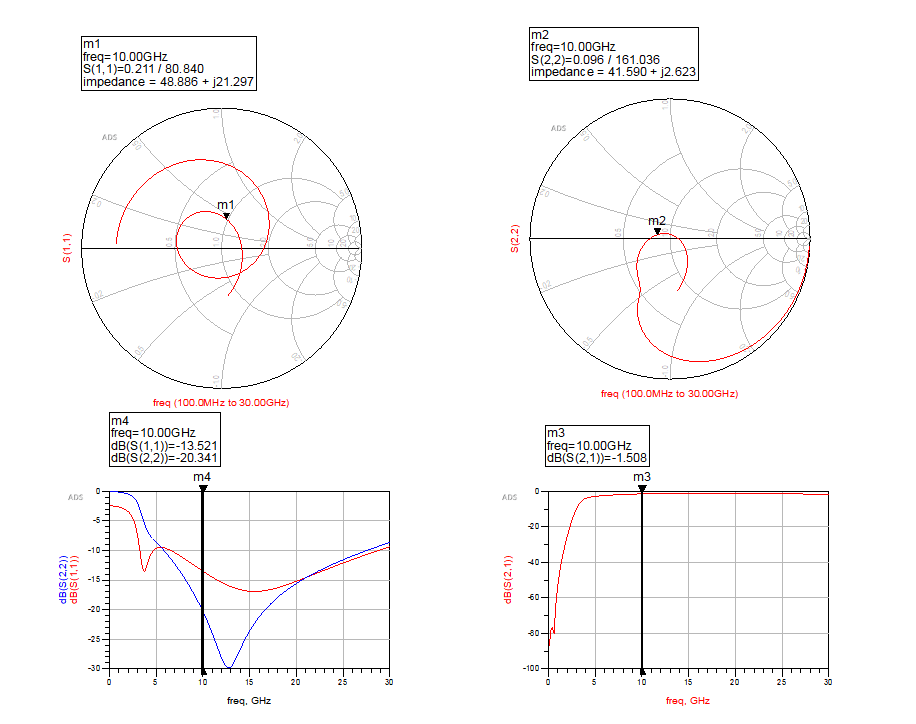 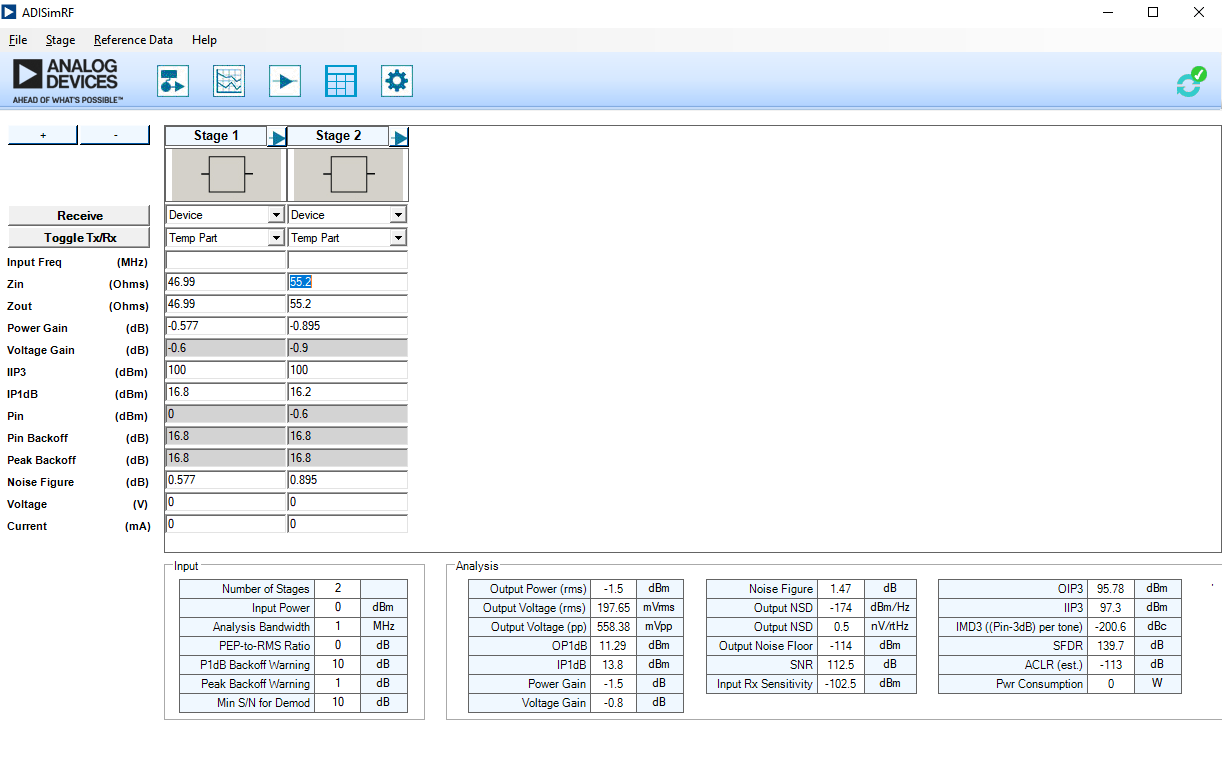 I tried to use the formula

but either I calculated something wrong, or it does not fit.

I will be grateful for any help or advice

@Jens I don't understand, did I dosmth wrong? 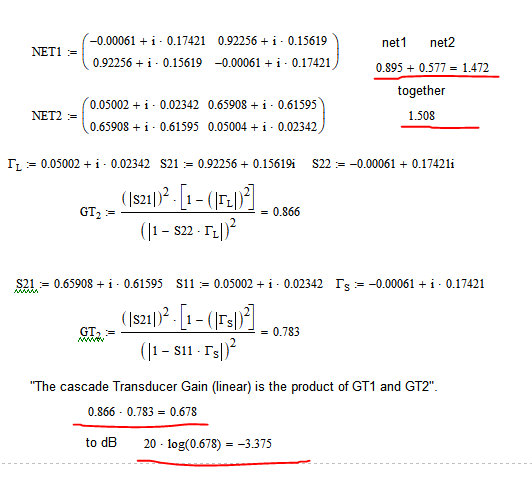 Yes, I saw the typo about GT and about the negative dB(S21) values for network 1 and 2.

And still I can't understand you -

"It occurs that cascade programs (a) neglect the denominator in the GT -equations, and sometimes (b) assume implicitly the source as matched (ΓS=0). If we assume both (a) and (b), the resulting cascade (total) Transducer Gain becomes -1.49dB in the example." What is it mean? You mean EDA Keysight ADS or ADISimRF counts wrong or what? Then why do they both add up?

Let me explain what I need it for. If you try to calculate cascade P1dB with nets AS IF matched at 50 ohms each - you get one value. But, if you take mismatch losses into account - you will get the total P1dB higher, because mismatch losses - will increase the cell losses - accordingly if you look at the cascade P1dB formula - you will see that this leads to an increase in the total P1dB. I wrote in more detail here in a similar question and explained the reasons (https://www.edaboard.com/threads/how-to-take-to-account-impedance-mismatch-losses-when-cascading-2-port-networks-as-rf-system.398650/)

So - I still don't understand how do I calculate the interstage mismatch loss (get the total dB(S21) of the two networks = 1.508 as in ADS) AND/OR then - how much should I change the cell loss to get a more accurate total P1dB value.

Excuse me for my misunderstanding.

The approach for the output of the cascade is accordingly, i.e.,

The following is about the results from ADSimRF and ADS, and the interstage mismatch.

ADISimRF applies a scalar approach; it obviously does not consider complex values. Therefore, it is no surprise when ADISimRF, in general, provides only approximative results when phase-dependent interstage mismatches exist. ADISimRF appears to tackle interstage mismatch in the following way. Let’s assume two stages NET1 and NET2 with individual Power Gains $|s_{NET1,21}|^{2}$ and $|s_{NET2,21}|^{2}$, respectively. NET1 has the real-valued output impedance $Z_{1,out}$, and NET2 has the real-valued input impedance $Z_{2,in}$. The resulting Power Gain $G$ of this 2-stage cascade is calculated in ADISimRF according to

ADISimRF applies the shown approach per each inter-stage interface along the cascade. Note, that $Z_{in}$ and $Z_{out}$ are in ADISimRF input values provided by the user for each stage independently. This is a simplification. (In general, the input impedance $Z_{in}$ of stage “i-1” depends on $Z_{in}$ of the next following stage “i”.)

In the example, the relevant input and output impedances of the two stages do not much differ from each other. Therefore, from ADISimRF the resulting cascade Power Gain of –1.5dB is only slightly lower than the ideal –1.472dB for no mismatches.

From ADS, the obtained s-matrix for the cascade provides the power gain $|s_{21}|^{2}$ of –1.508dB which is similar to the cascade Power Gain result from ADISimRF. Although ADISimRF and ADS apply fundamentally different approaches, they provide here similar Power Gain results for the specific cascade because the relevant impedances do not much differ from 50Ω.

One can obtain the same mismatch results at cascade input and output by referring to the corresponding complex impedances (from ADS) and using the above equations.

In ADISimRF the mismatch between cascade input and source is not incorporated in the Power Gain result. Instead, in ADISimRF the cascade Input Power is a value (in dBm) that is provided by the user. The input impedance of the first stage and the output impedance of the last stage have no impact on the calculated cascade Power Gain (but they do influence voltage gains). Therefore, mismatches at input and output of the cascade must be considered separately also in ADISimRF for any adjustment of the calculated Power Gain if, for instance, a Transducer Gain value shall be obtained.

Now, about the Power Gain result from ADS.

The ratio of output-power to input-power, Gain $G_{1}$, of NET1 can be expressed as

The ratio of output-power to input-power, Gain $G_{2}$, of NET2 can be expressed as

Not the answer you're looking for? Browse other questions tagged impedance-matching .

9
What is the actual loss in a feed line with high SWR?

1
Impedance matching between antenna and load - Theory and Practice?
3
Looking for criticisms on my VNA-like SWR meter I am designing
4
Is an antenna always matched to free space impedance?
6
If receive performance doesn't depend on SWR, then how can I tune my manual HF antenna tuner by band noise?
3
How do you calculate peak voltage given VSWR caused by impedance mismatch in a 50-ohm system?