Does SWR change along the length of a transmission line?

Wikipedia says "SWR is defined as the ratio of the partial standing wave's amplitude at an antinode (maximum) to the amplitude at a node (minimum) along the line".

Standing wave voltage nodes and anti-nodes appear at points which are odd and even multiples of 1/4 wave length back from the junction of a transmission line and an antenna if there is a mismatch, and everyone knows that when there are standing waves the impedance along a transmission line changes depending on the distance from the load.

When i move my SWR meter along a coaxial transmission line the reading changes depending on where along the line the SWR meter is, why is this ? I checked and there is no RF current flowing on the outside of the coax so that's not the reason.

The $SWR$ is, in principle, defined as a ratio of maximum and minimum voltages that exist at different locations of the transmission line. These two different voltages $U_{max}$ and $U_{min}$ can be measured to determine $SWR$. - However, $SWR$ can also be determined by the absolute value of the reflection coefficient, $|\Gamma |$, according to $$SWR = \frac{1+|\Gamma |}{1 – |\Gamma |} = \frac{U_{max}}{U_{min}} = \frac{U_{forward}+U_{return}}{U_{forward}-U_{return}}$$ $$|\Gamma | = \sqrt{\frac{P_{return}}{P_{forward}}}=\frac{U_{return}}{U_{forward}}$$ The absolute value of the reflection coefficient, $|\Gamma |$, is the square-root of the ratio of return-power to forward-power, both now measured at one and the same location along the feedline (e.g., coax) to determine $SWR$. Equally, one can measure the forward voltage and return voltage at the same location, or their sum and their difference to determine $SWR$.

Your observation of $SWR$ changing along a (lossy) line confirms that $SWR$ measurements are best performed at the load if one wishes to determine the actual load mismatch.

For a lossy line, in a Smith-Chart the transformed load impedance moves along a spiral, which is the curve of the complex reflection coefficient, $\Gamma $. Asymptotically, the spiral merges into the center of the chart, as the distance to the load becomes longer and longer. At the center of the Smith-Chart, the transformed load impedance equals the characteristic impedance of the feedline; the reflection coefficient becomes zero, i.e., $\Gamma =0$ and consequently $SWR=1$. If the lossy line gets very long, at the input we will no longer feel the actual mismatch that might exist at the far end of the line. Therefore, the $SWR$ measurement at the input of a long feedline can significantly underestimate the $SWR$ given at the load side. Perhaps, in practice one might like to keep this in mind. 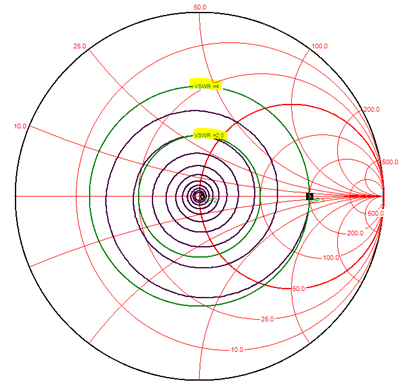 In the above equations, all values $U_{forward}$, $U_{return}$, their sum $U_{forward}+U_{return}$, their difference $U_{forward}-U_{return}$, and the power values of $P_{forward}$ and $P_{return}$ refer to the one location of the SWR-measurement. We can perform the measurement anywhere along the line (keeping in mind the measured $SWR$ on a lossy line decreases as we move away from load). We do also not need to relocate the meter for two separated measurements, provided we obtain by the applied meter-principle two values which allow to separate and to obtain, directly or indirectly, the forward component and the return component that both apply at the single location of our measurement at any spot selected along the line. With the knowledge of forward component and return component, we know the reflection coefficient and $|\Gamma |$ and, thus, we know $SWR$.

Now, assume the measurement principle allows us to obtain only the phase-dependent superposition of forward voltage and return voltage; this location-dependent superposition is the (transversal) voltage of the standing wave. From this single value, we are no longer able to separate the result into forward component and return component. Also, we might have no idea where our measurement location is relative to the phase of the standing wave on the line. However, in this case we can search for the positions of the maximum and minimum standing-wave voltages along the line, with the ratio of the measured voltages $(U_{max}/U_{min}$) being the SWR. (Any transmission line loss between the two measurement positions (separated by $\lambda /4$) is usually neglected.) But this measurement principle appears meanwhile as heritage from the past (photo; credit: QST-Magazine), although the principle might appear closer to the (original) definition of $SWR$. 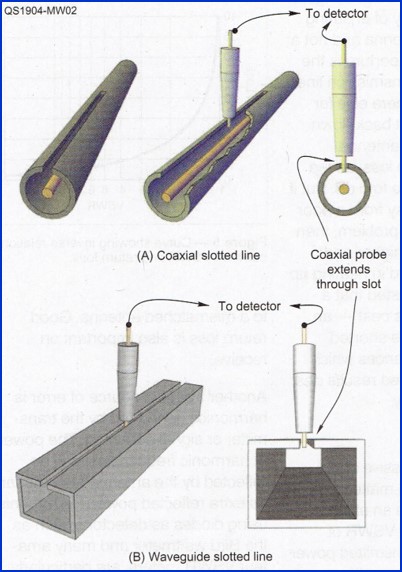 Not the answer you're looking for? Browse other questions tagged transmission-line or ask your own question.