Since all antennas require a ground, reference or otherwise, there are two poles for their operation. For a mag mount, the car body is the reference ground. A vertical cannot operate without a ground or reference ground. In reality, a vertical "monopole" uses capacitive coupling when it is mounted on an insulator. Monopoles use the "mirror image" provided by the ground to operate. As a clarification, imagine a satellite's antenna. The case, or housing becomes the ground, again a "reference" ground. In cases where the case is not used, the RF-negative portion of a circuit board becomes the reference. Since two things are necessary to radiate a signal, doesn't that make a dipole?

A dipole antenna is so named because the electric field around it is an electric dipole. 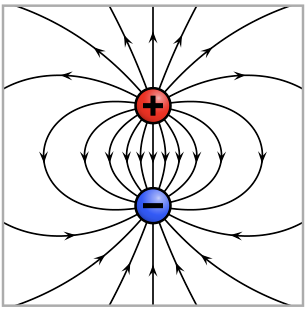 Derived from work by Geek3, CC BY-SA 4.0, via Wikimedia Commons

This is intuitively obvious: a dipole consists of two wires. At any instant, one has a positive potential and the other has a negative potential, except for the instant where the polarity flips and the potential is zero everywhere.

You will notice that at all points equidistant from the two poles form a plane. The potential at this plane is zero. This is true because these points are balanced between the positive and negative potentials of each pole of the antenna.

A monopole antenna has just one wire, and a ground plane. The ground plane is both physically a conductive plane (or something made to approximate it, like radials), and the imaginary plane just described which is all the points that would be equidistant between the two poles a monopole would have if you considered it to have a imaged second pole.

So while a monopole does have two parts, one of them is not a pole. It's ground: not because it's in the dirt, and not because it's connected to the coax shield (although either of these things may be true), but because its potential is zero.

Aside from magnetic loop antennas, which are kind of the dual to dipoles (remember how a current in a conductor like a dipole causes a magnetic field? It makes no difference whether you hang a dipole into the electric field of an EM wave, or a coil into the magnetic field of the same EM wave.), there's many other types of antennas:

Your assumption that you always need to have a second electric branch simply doesn't hold.

This depends on your definition of "dipole", as in actual use (which may or may not conform to anyone's particular dictionary of terms) the meaning of the term is varied.

The EM field generated by an antenna depends on accelerating charge. And conservation of charge always requires that for charge to accelerate to some physical part of the antenna, it has to come from some other part, and vice versa. You can call those two parts the two poles of a dipole. Or maybe you don't like calling it a dipole if the feed point isn't anywhere near the center, or if the majority of the charge doesn't travel in anything like a straight line to a single point. In some cases, one "pole" might be too defuse to recognize as a pole (for instance, an entire planet, as in Earth ground, or other vast astronomic object, such as solar plasma toroidal currents which may or may not have any poles, and may or may not radiate any EM, as in solar storms, etc.)

A magnetic loop antenna, magnetically fed (no electrical feedpoint or blocking series capacitor) might not be a dipole.

18
Why do folded dipoles have greater bandwidth than ordinary resonant dipoles?
12
Are antennas circuits?
5
Does the wire/conductor size of all the elements affect antenna bandwidth?
2
Field Strength calculations with known antennas
1
Transition Point Between Fan and Cage Dipoles
1
Resistance of antenna dipoles
0
Gain in long wire antennas
1
What are Smart Antennas?
11
Will electrically joined dipoles of different lengths, at right angles, behave as a multiband antenna?
4
Why does damping between two antennas increase with frequency?