I'm trying to produce a Yagi antenna for the 2.45 GHz band using a 3D dual extruder printer. The idea is to print the antenna elements using a metal filament and encasing it all in plastic.

The antenna needs to be highly directional, with 8 elements or more. Will it work?

Another option is to print the antenna plastic casing and then insert the metal rods through openings created during the printing process.

Not likely. To the best of my knowledge, any "metal filament" that's printable with a home 3D printer is PLA with 10%-50% of metal powder. This is good enough to make prints that look and feel metallic, but it's not enough for good electrical conductivity. Most likely it won't work as an antenna at all; definitely it won't have positive gain in any direction.

The idea with putting rods into a 3D-printed form is more hopeful. The low-dielectric-loss plastics you would really want to use for antennas (PTFE or polystyrene) aren't very practical to print with; PLA and ABS are very printable, but electrically they're much worse. But you might be able to get away with it if you take care to decrease the plastic coverage as much as possible.

Some general hints from my experience:

This is an ABS plastic yagi we used to make. Elements were 1.2 mm tinned steel wire. It could be tuned over 1.4 to 2.6 GHz by adjusting the length of the directors. The feed and director were on a credit-card sized PCB at the back. Two identical housing halves were glued together. 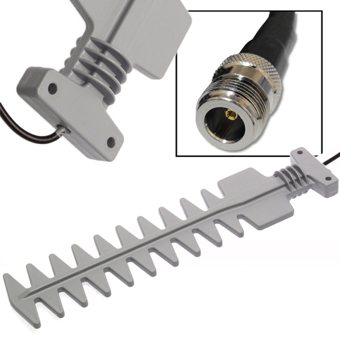 Gain was about 12 dBi, I think the plastic cost us 2 or 3 dB in losses, it was quite thick around the elements.

Even if one could print, (practically), a good quality (electrically, see previous answer) it would seem impractical. What I would suggest, and would be very useful is the 3D print a good quality sturdy boom, and element supports, (which I have always found the difficult part in antenna builds). The support structure needs to be very sturdy, UV resistant, and provide for easy attachment of the metal elements, (I have always been a fan of aluminum tubing), you could also print thin element covers with covered ends to keep the bugs out.

2d "printed" antennas are actually common and in commercial use. For instance, what appears to be flat panel antennas on cell towers are sometimes arrays of what appear to be J-poles including phasing sections on a PCB in a case. Bluetooth and wifi antennas embedded in devices are commonly printed directly on the PCB for the device.

PCB antennas actually work quite well, but are difficult to make, as standard PCB has variable dielectric, so a higher quality PCB is needed. When modeling the antenna, the dielectric constant of the PCB has to be taken into account, along with any surrounding case.

3d printing itself is can be quite useful for making antennas, but printing the metal in the antenna is unlikely to be useful as the conductivity of the result is likely to be poor and/or variable and the surface of the print may be too rough. More useful would be to print jigs, forms, and mounting hardware for the antenna. There are many examples of this on thingiverse.com that can be searched for. Complex antennas contain both conductive and non-conductive parts, and 3d printed non-conductive parts can be useful, although again, dielectric constant of the plastic may affect the antenna, depending on placement and size of the parts and the variable density of the parts.

RF in antennas largely travels on the outside of parts, so it might be interesting to 3d print forms for the antenna and then wrap the forms in copper foil or adhesive tape. Thickness of the foil may be important for transmitting power carrying capacity. If the metal is thick enough, the dielectric of the plastic on the inside will not have much effect.