What happens when a groundplane antenna's vertical element, bottom feedpoint, and/or bottom loading coil move down and encroach into the area below the plane formed by its own perpendicular elevated radials?

I have never seen a book or article about ground plane antennas directly address this question.

I've read that the feedpoint impedance is theoretically 35 ohms when the elevated radials are perpendicular to the vertical element, and that tilting their outer ends downward causes the impedance to increase until it reaches 50 ohms. What happens if you continue tilting them never gets discussed. My hunch is that as the radials become increasingly vertical and merge into the bottom half of a vertical half-wave dipole, its impedance approaches that of a dipole.

Based upon that, I'd expect that if you tilted the radials upwards, the feedpoint impedance would get smaller and smaller and approach zero as the radials effectively merged into the vertical element itself. Taking a wild guess... the (imaginary) j component approaches infinity?

I've read that with vertical antennas at ground level, a "virtual" bottom half of the dipole mirrors it below ground level. Assuming the same thing happens with the ground plane formed by elevated radials, it seems logical that pushing part of the vertical element below that plane would cause the real vertical element's lower portion, and the upper portion of its imaginary mirror, to encroach into each other's space and virtually overlap. Once again, j->infinity, and Bad Things Happen?

I live in a townhouse, and my back yard is surrounded by 6 foot tall concrete walls with an aluminum-framed screen enclosure (basically, like a typical Florida pool cage) on top (10 feet from ground to top, 2 feet from wall-top to enclosure-top). 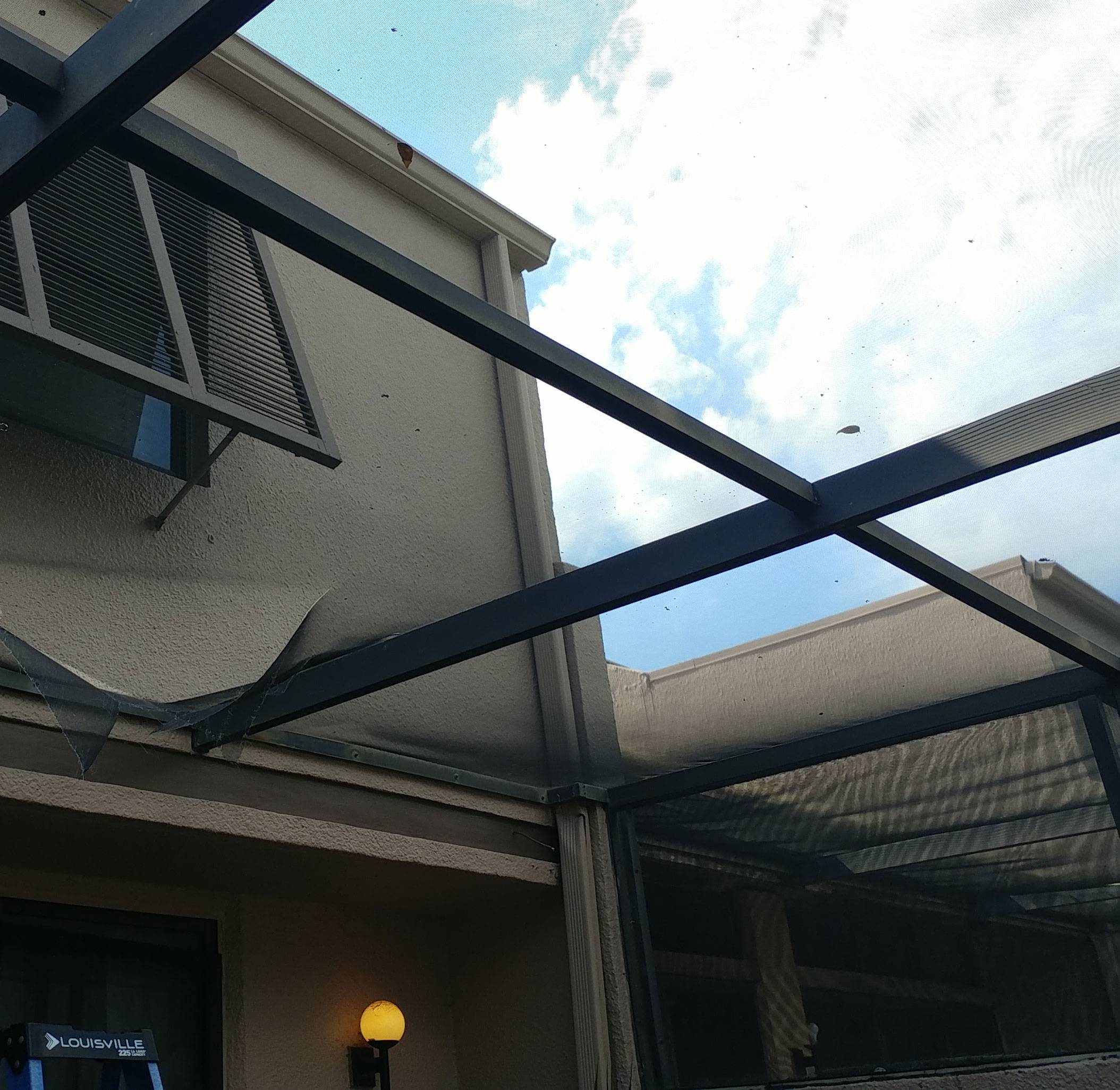 I'm presently re-screening it (for reasons that are obvious from the photo), and decided that I might as well take advantage of the opportunity to replace the dented downspout and improve it a bit in case I ever want/need to use it as a vertical antenna element in the future.

The screen enclosure frame will serve as the ground plane. My neighbor graciously allowed me to connect their enclosure frame to mine near the proposed feedpoint and run a discreet AWG22 radial wire up along the edge of the sloping roof you see in the background, so the radial field ought to be "decent", if not literally "good" (at least, towards the north, east, and south).

I also have a W3FF loading coil (formerly used with a Buddipole) available that I plan to use at the bottom as well, though I didn't test with it.

I'm mentioning all of this to make it clear that I'm not just naively attaching wires to an as-is downspout in the hope it might randomly work. It's more like I'm deliberately building a coil-shortened quarter-wave groundplane vertical whose large-diameter rectangular radiating element hides in plain sight from the HOA as the upper portion of a downspout. ;-)

Anyway, here's my quandary: the new downspout is 10 feet long. There are at least two ways I can use it:

However... I'm still trying to understand the consequences of having a foot or two of the antenna's vertical element (and the loading coil) lying below the antenna's ground plane.

If it's genuinely no big deal, being able to change bands and get at the bottom from below the screen would certainly be convenient... but I don't want to do a lot of work and have it all be for nought because the portion below the ground plane ends up destroying the antenna's effectiveness.

Mobile antennas permanently mounted on the roof of vehicles almost always have a feed line below the “ground” plane.

I mean no offense, but I think you're not using the term "ground plane" correctly. A real ground plane extends quite a long ways horizontally away from the antenna. How far is that? Into the "far field", which is at least several wavelengths away.

What you would have is a system of elevated horizontal antenna elements that are not directly coupled to earth, and because they are not tightly coupled to earth, the real ground plane that does extend a long ways horizontally, they would radiate like the other antenna elements. If your elevated horizontal antenna elements were to approximate a disc with radius a quarter-wavelength long electrically, then they can could behave a lot like a ground plane at that frequency. (Such a disc is sometimes called a "counterpoise", but that term gets abused so much that many experts don't use it any more. I'm not an expert but I'll follow their lead.)

I think the best way to get an idea of how such an antenna system might behave would be to model it in 4nec2 or EZ-NEC, which both use the same calculation engine. Maybe your elevated horizontal elements would behave similar to a ground plane. If you sketch a three-dimensional blueprint of your intended setup and edit your question to include the blueprint, then some kind person with more free time than me might help you model it. Once you have a model, then the kind of "what-if" questions you are entertaining, such as what happens to the feed point impedance when certain antenna elements are tilted, become quite simple to explore.

If you do sketch a blueprint, you probably should include the rough locations of large nearby passive conductors, such as the wiring in your wall, because they would affect the antenna also, and so they should probably be part of the model.

Not the answer you're looking for? Browse other questions tagged vertical-antenna .

6
Tuning/trimming a ground plane antenna
8
Does mounting a ground plane antenna upside down change the takeoff angle?
9
When and why does the size of a ground plane or radials matter?
8
calculating all specifics for a 5/8 antenna
6
Are Elevated Radials Necessary for Elevated, 5/8-wave "Ground-Plane" Antennas?
5
What is the proper way to electrically wire in a loading coil to a vertical antenna?
5
Base vs center loading a vertical antenna
1
Troubleshooting 5BTV antenna
2
Why does an HF "monopole" need dozens and dozens of radials while a VHF/UHF "ground plane" antenna only needs four?