This a follow up from this question: QRN: How to chase down a solid S9 noise floor on 40m only

Focusing on how to interpret the signals received with an electrically small, untuned "shielded loop". The following background articles/questions on this type of antenna explain how it works, how not to construct it (eg ARRL 1998), and what it can and cannot do:

What does the addition of a shield to a small loop accomplish?

Is it possible to make a shield that blocks time-varying electric fields, but not time-varying magnetic fields?

I followed the construction advice in this blog article quite closely, including the use of a pre-amp and a tinySA to amplify and analyse the signal (photos of my implementation in original question)

The core of main challenge, which to find the source of my S8-S9 white noise floor, amounts to these tinySA screenshots.

Elevated noise floor when tinySA connected to my fan dipole: 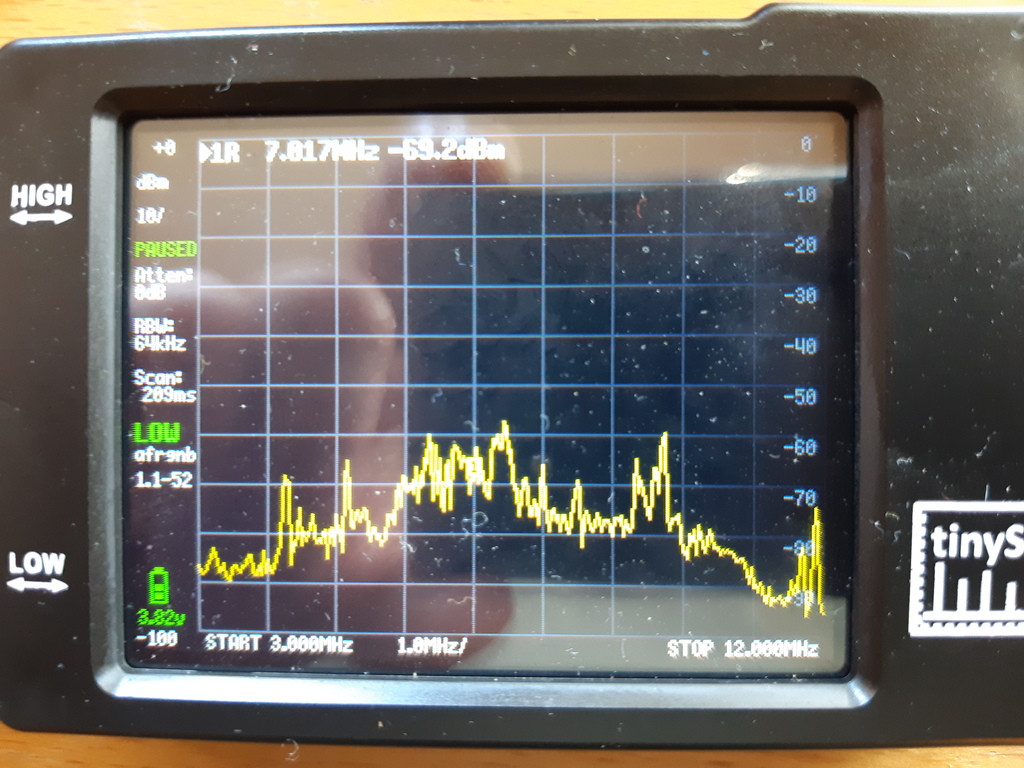 Signal from the loop when standing under that dipole: 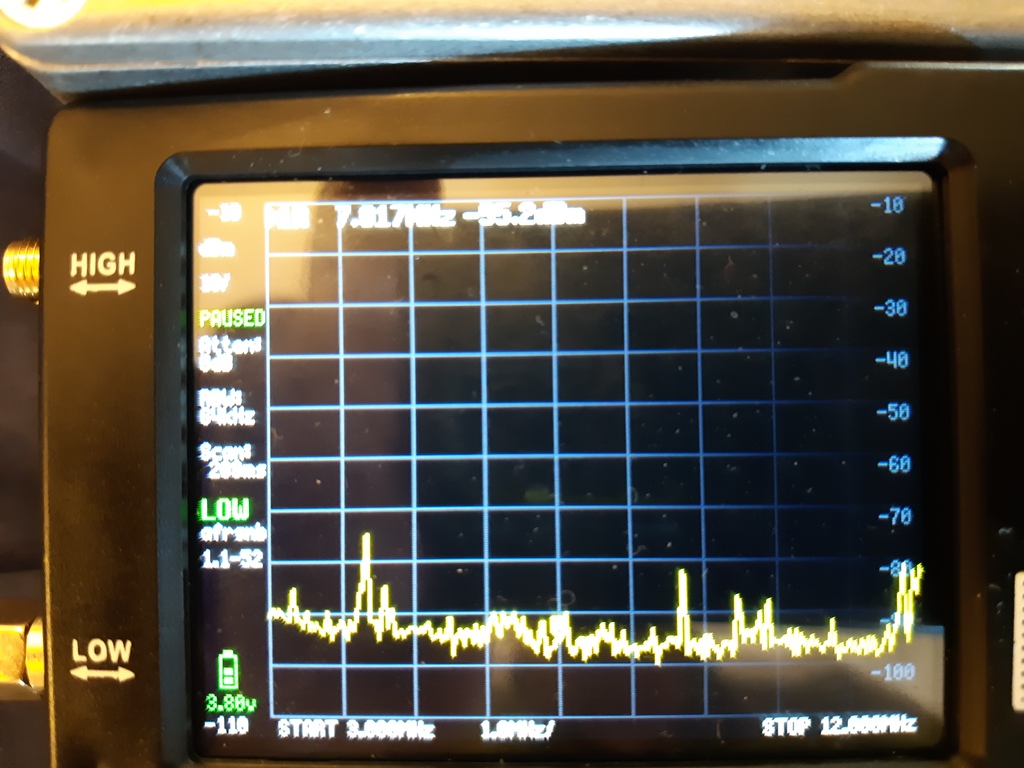 The elevated noise floor is not present. (Note that that I have (hopefully) eliminated conducted noise and feed line shield noise in original question).

So the questions are:

Update 28/4/2021 Further to some very good suggestions from Phil Frost I have carried out some of the tests he suggested. Results below.

Baseline for today (somewhat lower noise yeah! lowest I have ever seen during daytime - slight drizzle outside...) Normal Antenna setup at radio:

tinySA standing under Dipole fed by 5m coax => Very similar to via the 22m feedline -80dB base with peaks to -50dB. Maybe slightly higher (less attenuation?)

Conclusions from these measurements

You've stated in your other question that you've tested the loop and you are able to receive signals, so it works to some extent. So a few possibilities remain.

Firstly, the presence of signals does not necessarily mean the loop is working well. It could be that the noise you are trying to find with the loop is below the receiver's noise floor. Hard to test this for sure without an anechoic chamber, but you can get a pretty good idea just by comparing the number of signals you can hear (especially the weak ones) with your other radio. If the loop can hear many more stations, it's working. If it can't, it's likely the loop's noise floor is masking them.

Another possibility is the noise isn't being received by the antenna, but something else in your station. That could be the feedline, the receiver, or any of the other wires connected to the receiver, including the power cord, all the electrical wiring in your home, any cables you may have to interface your radio with your computer, anything attached to your computer, or any ground connections or even the ground itself. Or anything connected to those things, such as the power lines, your neighbors, or communications cables running around the neighborhood. It could even be a noise source simply in the same room as the receiver: the receiver's shielding isn't perfect.

To check this, I'd run a short feedline from the dipole to where you were standing when you made the measurement with the loop that showed no noise. Then listen to the dipole with the same receiver you used with the loop, while standing in the same spot.

If the noise goes away, you know the antenna isn't the problem. Start walking around the house and disconnecting things and turning off things until you've narrowed down the source. Powering your radio from a battery and turning off your home's main circuit breaker, then turning circuits back on one at a time can be informative. It could be you need a better balun on the antenna: you can test your current balun for effectiveness. Or you may discover some noise sources in your house that can be controlled with ferrite beads or simply need to be removed.

If you still get the noise even with the short feedline and the portable receiver, then you may just have to look around more. Of note, the near field of the loop and the dipole are substantially different, which means if the noise source is in the near field of the antennas then one may be very sensitive to it while the other is not. It could be you just need to explore the area immediately around the antenna a little more with your portable receiver.

Not the answer you're looking for? Browse other questions tagged antenna loop .

20
How to detect common-mode currents or “RF in the shack”?
14
What does the addition of a shield to a small loop accomplish?
4
QRN: How to chase down a solid S9 noise floor on 40m only
3
Is it possible to make a shield that blocks time-varying electric fields, but not time-varying magnetic fields?

7
Is it safe to mount an active scanning antenna close to an hf antenna?
4
DAB antenna in roof space
3
Optimising a small magnetic loop with 1:1 SWR but little radiation
5
Signal path to maximize RFI rejection in an urban environment
2
Multi-wire EFHW?
0
60cm 9 kHz 30 MHz Shielded loop antenna behavior as a transmitting antenna
1
How to calculate of shielded loop antenna correction factor without extra antenna measurements
6
Antenna options
5
When a dipole antenna is fed via coax, what powers the ground-side of the dipole?