Connecting a Katsumi Elekey EK-150 to my transceiver

I'm trying to get it working with my Kenwood TS-570S (manual), which has a 3.5mm Key jack. With a male-male audio cable connected to the Key jack, if I short the positive and negative leads together, the transceiver transmits CW, as expected. The paddles on the keyer also produce tones through they keyer's own monitor speaker, as expected.

What would you expect a multimeter to be able to detect on the keyer's Keyed Line output? I detect a voltage of a fraction of a volt between the positive and negative leads, but neither the voltage, resistance, current, nor continuity between those leads changes when I'm keying vs when I'm not. I don't know exactly what is expected, but that seems strange to me. Is this thing broken?

I took it apart and found a transistor that had been blown apart, pictured below (the black one with its metal innards showing), likely from a scenario described by @rclocher3. This is the NPN transistor that supplies voltage to the blue PNP transistor and should be switching based on its base input but instead is supplying a constant 5V. No surprise there, looking at it. If nothing else is wrong, this should be easy enough to repair! 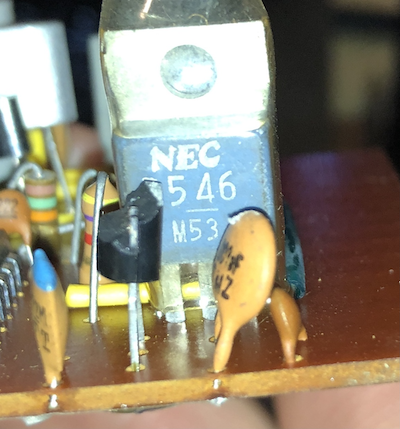 I'd say that your keyer is broken. That keyer is designed to key tube rigs. If someone hooked it up incorrectly, like using the direct output when they should have used the relay output, then the keyer's transistor Q4 could have been exposed to many hundreds of volts, or it could have been asked to switch more current than it was designed for. My guess is that Q4 is dead.

If I were you, I'd try plugging my paddles directly into the radio's paddle jack, or try a different keyer. The radio's built-in keyer should work just as well as your EK-150, and be better integrated with the radio of course. Your EK-150 is fairly antiquated, so unless you have a specific reason to use an EK-150, you'll probably be quite satisfied with your Kenwood's built-in keyer, or any other modern keyer. (Lots of people prefer the timing of a particular keyer brand, including me, so if you just prefer the timing of the EK-150, then there's nothing wrong with that.)

Don't just throw out the EK-150 if you don't want it any more; see if anyone at your local ham club wants it, or take it to a hamfest and put a "free" sign on it first. Some people really like old ham gear, and don't mind fixing things.

Not the answer you're looking for? Browse other questions tagged cw kenwood equipment-troubleshooting or ask your own question.