I was wondering whether quick testing of various commercial ISM band transmitters for operation can be accomplished with some sort of off the shelf universal receiver which only turns on a led upon getting anything in the ISM band. Think key fobs, wireless plugs and thermometers, etc. as transmitters.

Does the key fob emit a spread spectrum signal ? Oh, I had no idea. Ok, let's stick to OOK, FSK at most. @Brian K1LI's solution is actually viable. IT was about 5 years ago when I took one such receiver, plugged it in to my PC's sound board through a 100nF cap and surely enough, Audacity showed up my signal: different digital modulations interference. Does it happen?

I think that with a bigger cap / with this cap and a tiny led, what I am after can be done. But... I want it already built. User should have to only power on the device, maybe adjust a variable cap and watch the led.

It is not generally feasible to detect "anything". The problem is there's always something, even if it is just noise. To know if something is signal or just noise you need to know something about the signal, but when you want to detect "anything" this means you must enumerate every kind of signal that could exist, which is of course not feasible.

Your best bet is likely a cheap SDR, like many of those based on the RTL2832U. With such a device you can at least receive whatever signal and/or noise may exist in the ISM band and display it on a waterfall, and from there make some guesses about the presence or absence of a signal.

Here's an example of an inexpensive unit that might meet your requirements: 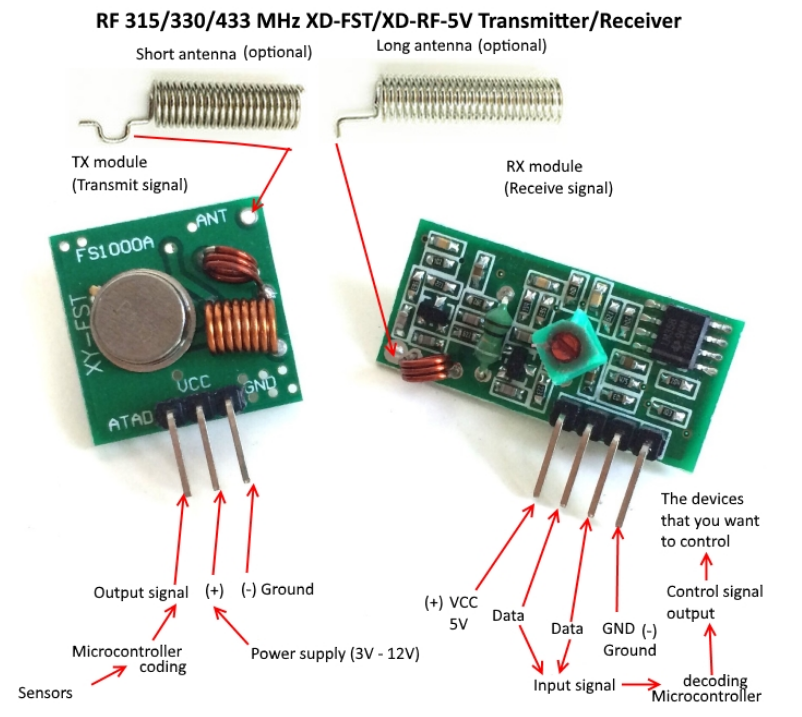 The receiver module, on the right, has part number XD-RF-5V. According to several internet searches for "XD-RF-5V datasheet," the system uses Amplitude Shift Keying - ASK. Inasmuch as the modules are intended for connection to an Arduino or other digital means for decoding, this implies that on/off from the transmitter produces on/off at the receiver's DATA pins. A YouTube video demonstrates this simple mode of operation using a breadboard.

Whether you can visually detect the presence of a particular input signal at the receiver by observing an LED may depend on the rate, duration and occurrence frequency of the transmitted signal. But, it would be a simple matter to connect the receiver to an Arduino and write a simple sketch to latch an LED "on" when a DATA pin goes high, or latch it with a simple IC.

Not the answer you're looking for? Browse other questions tagged receiver testing or ask your own question.

5
Simple DIY AM receiver for 25/28 MHz
5
Are there any good, consistently receivable signals in the US for HF receiver testing?
7
Regenerative receiver interference?
7
How is the FM-signal demodulated in my receiver?
5
Good FM receiver single-chip IC for simple VHF receiver?
0
Ultrasonic FM receiver
3
How to identify a practical HF communication receiver?
0
Detecting receiver intermodulation distortion?
3
Modeling a regenerative receiver
3
Why is my experiment to produce 3rd order harmonics by saturating a receiver not working