How can I find the input port for downloading my radio information?

I am trying to download my Baofeng UV-5R into CHIRP for the first time and it is asking what port to pull information from. How can I find what to input here since it isn't automatically updating/ what do I need to fix to get it to automatically input? 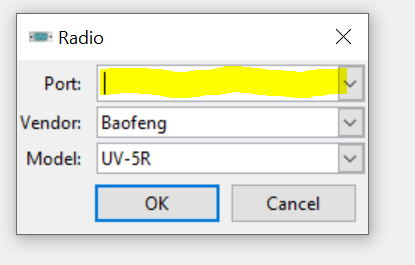 If CHIRP isn't picking a serial port for you automatically, but there are some in the list, then you may have more than one serial port or "virtual" serial port in your computer, and your problem is to figure out which one belongs to your cable.

If you have more than one serial port in the list and you're using a USB-to-serial adapter cable, which most people use, then there are ways to find the identifier of the virtual serial port associated with your cable.

Not the answer you're looking for? Browse other questions tagged radio-programming uv-5r or ask your own question.

3
Difference between Boefeng UV-5RE Plus and UV-5
5
UV-5R 4W BFB297 vs UV-5R 8W BFP3-23 (difference 4W vs 8W)
1
UV-5R with 3800 battery... usb 5v to 7.4-8v charger
6
How do I legally use a Baofeng UV-5R radio for communication?
2
How can I tell if someone is mistakenly transmitting on a repeater output frequency, instead of the (offset) input frequency?
1
How can I import stations listed by RepeaterBook as FM and other things into my HTs with CHIRP?
0
BF-888 radios don't work with UV-5Rs on the same frequency