I just built a homebrew antenna that consists of a full-length quarter-wave vertical sized for 20m, with a "top hat" consisting of a Hustler VP-1 and trio of Hustler mobile resonators (RM-80S, RM-40, and a RM-20 with extra-long whip repurposed to do 30m instead). 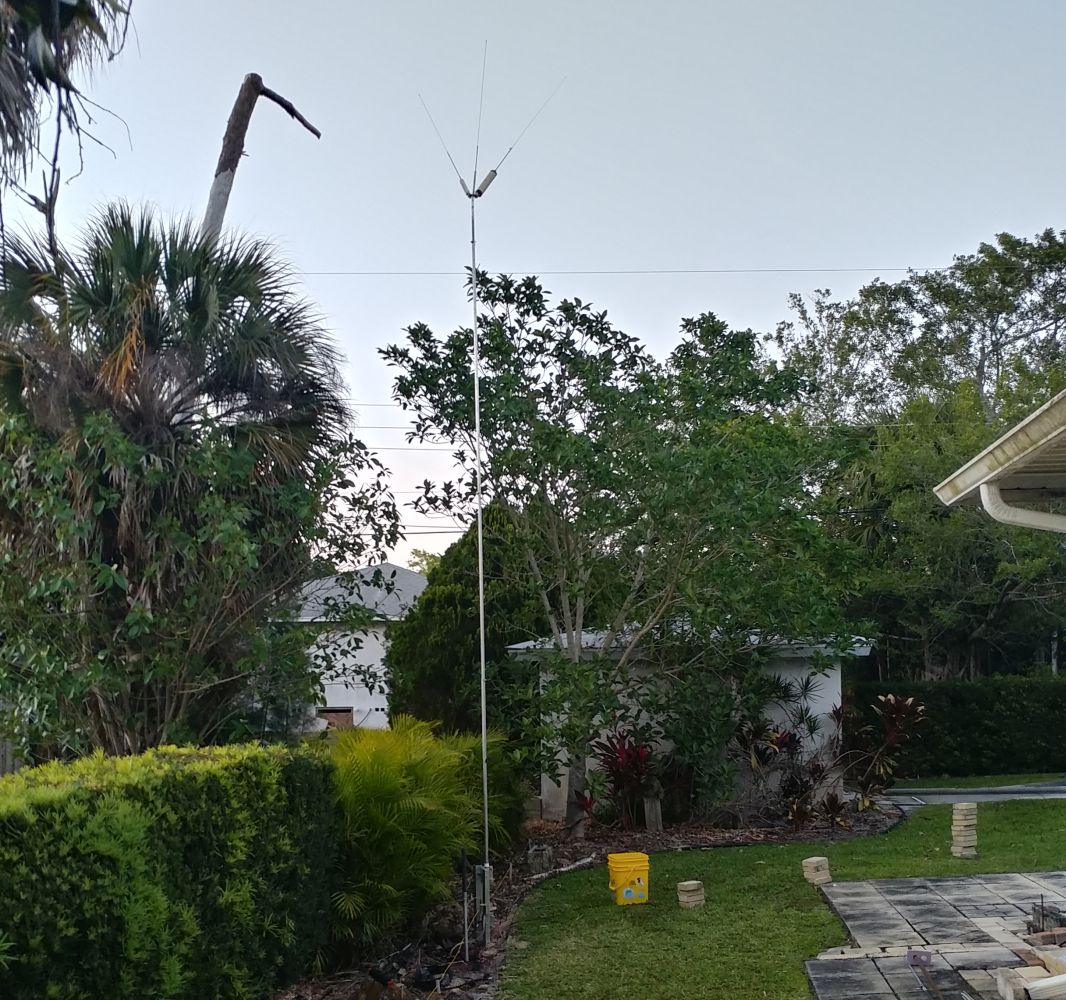 The antenna works extremely well on 30 and 40 meters. It works as well as can be reasonably expected (for a ~22 foot tall antenna) on 80m. It works surprisingly well on 15m. It's absolutely dysfunctional on 20m.

More specifically, according to NanoVNA it's completely dysfunctional between approximately 14.04MHz and 14.16Mhz (the precise chunk of 20m I actually care about). It's like there's a bubble around that range of frequencies that adjusting the lower portion of the antenna simply can't fix.

Here's an example sweep from NanoVNA (ignore markers 0 and 1): 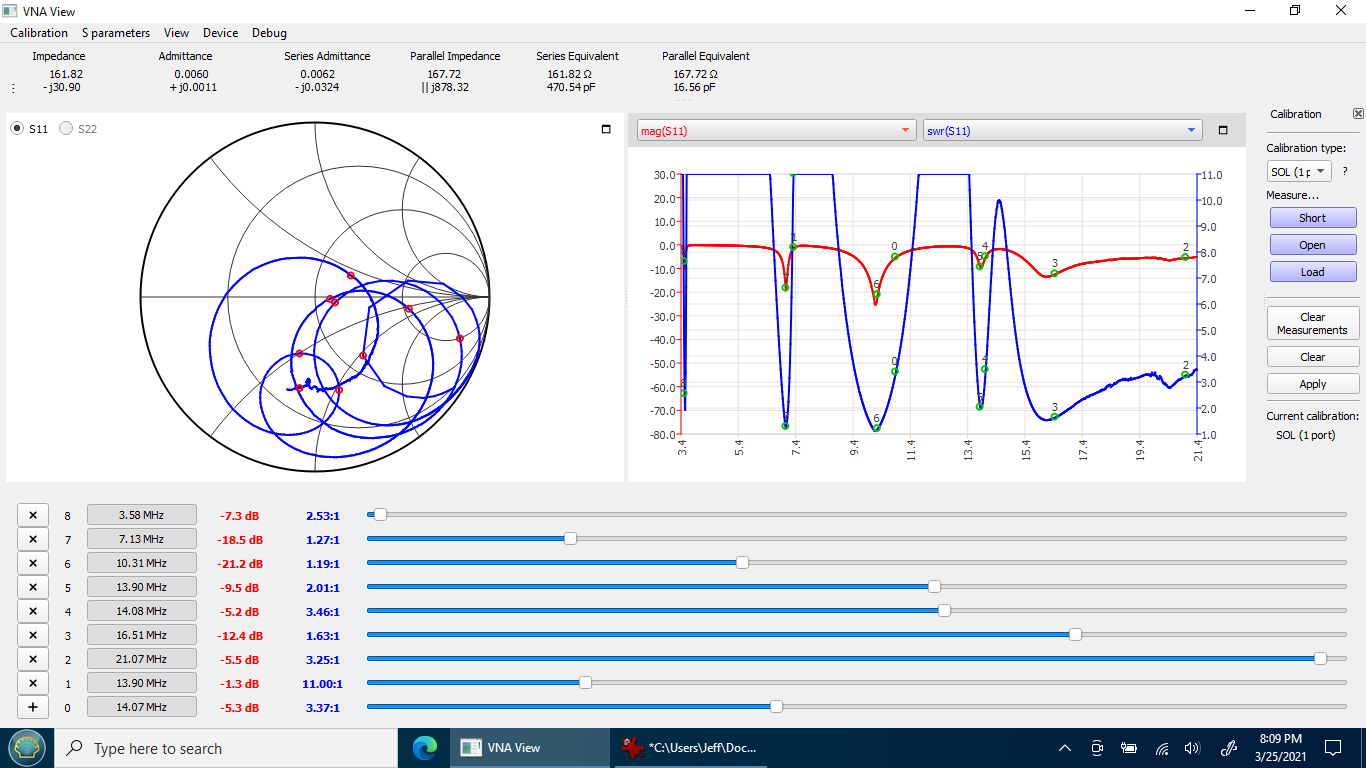 If I lengthen or shorten the lower element by up to a foot either way from ~17' (from ~18 feet to 16 feet), the pair of SWR valleys above and below 14.10Mhz shift left/right and slowly move towards each other... but right around 14.05 and 14.15Mhz, the minimum SWR value shoots up towards infinity as the two merge together somewhere far above the graphed range, leapfrog over the 100KHz chunk I care about, then come down and form a new pair of SWR curves flanking 14.10MHz. Eventually, if I keep lengthening or shortening the element, one of them has its SWR start to rise until it merges into the larger inter-band curve, and the other flattens out at a low SWR somewhere around 12 or 18Mhz.

Spoiler alert: the reason why I was using the RM-20 with a longer whip for 30m is because an earlier iteration of the antenna (built with a 5' lower shared mast) that tried using the RM-20 for 20 meters had the exact same problem... a SWR bubble centered around 14.10Mhz. What I failed to realize at the time was that even though I re-tuned it for 10.13Mhz by lengthening the whip, the same coil problem that screwed up its ability to work for 14.07Mhz was going to keep screwing up the ability of the antenna to work near that frequency.

OK, it turns out, the Hustler RM-20 resonator was the culprit, after all. I removed it from the VP-1 mount (leaving only the RM-80S and RM-40), and the problem completely went away. 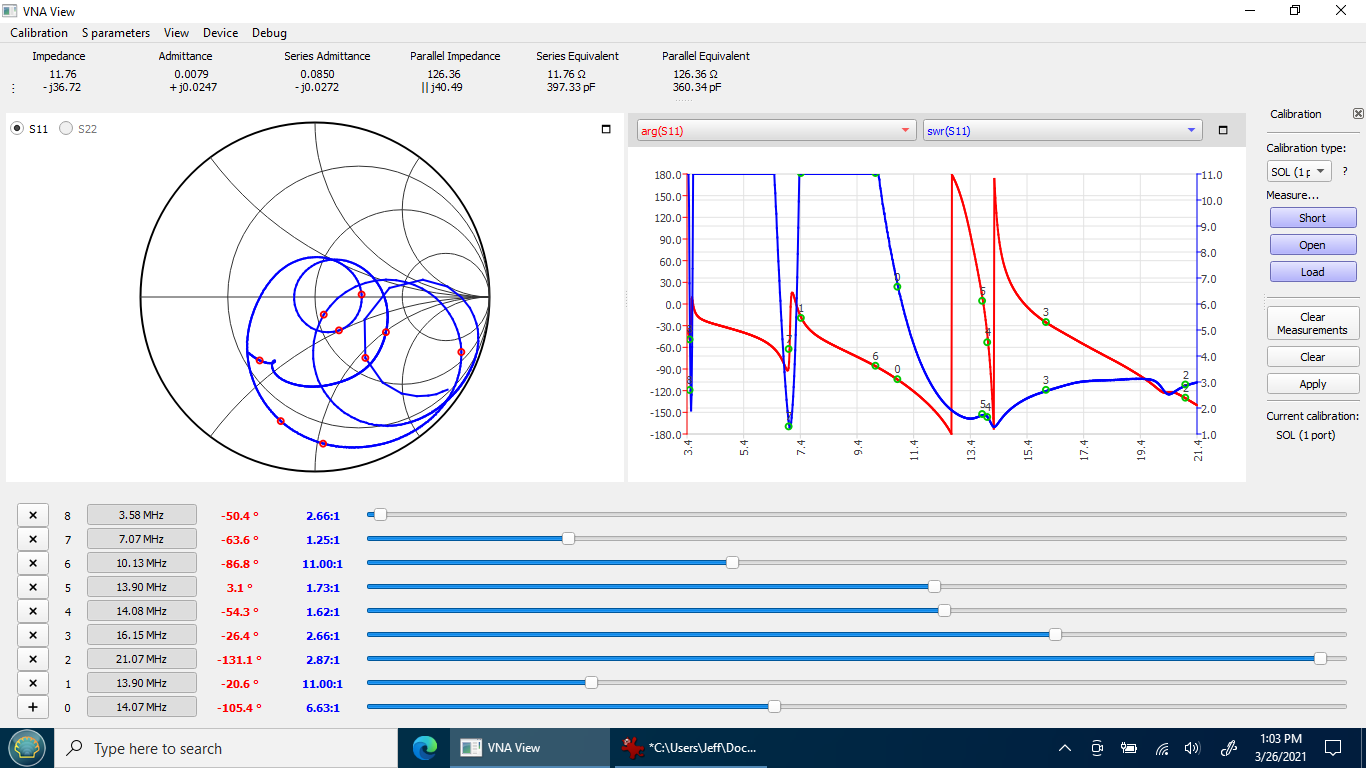 I did more research this morning, and learned that apparently, the RM-20's inability to work on the lower 20 meter band (where digimodes like FT8 live) is well known. Apparently, its designer pulled some optimization tricks that make it work better than expected (wider bandwidth, flatter and lower SWR curve) on the upper (SSB phone) portion of the 20m band, at the cost of rendering it completely unfit for use within a small chunk of the lower 20m band (which, unfortunately, is almost precisely centered on the chunk of frequencies used for 20m FT8).

The work-around is to buy a Hustler RM-17 instead, and pair it with a longer 3/32" diameter whip.

Not the answer you're looking for? Browse other questions tagged antenna-construction vertical-antenna or ask your own question.

2
Why SWR significantly changes with adding 10-30 meters of coax in presence of RFI choke?
6
Multiband vertical antenna not working as expected
2
how does this collinear antenna work?
1
Need antenna for mobile mag-mount LPFM broadcast 88.3 MHz
1
Troubleshooting 5BTV antenna
4
What do you call antenna that combines multiple Hustler resonators (using a VP-1) above a shared mast?
6
Antenna options
2
antenna element with "doubled up" nested aluminum rods for added stiffness
3
Vertical antenna with feedpoint below ground plane?