Using Earth as an RF ground

I have built a simple ground plane antenna for 70cm with a connector, 4 radials, and one vertical element.

It got me thinking, can the actual earth be used, because AM towers use it? IF I went outside, connected one end to a deep ground rod, and the other end to the vertical element, would the radiation be the same?

Is using the earth as an RF ground frequency specific, for example, don't use it above 30MHz?

AM broadcast stations do not use the Earth as ground for the antenna. To the contrary, they go through great expense laying huge radial fields precisely to avoid ground currents in the Earth. See these pictures of WTMJ on qsl.net. Here's one of them: 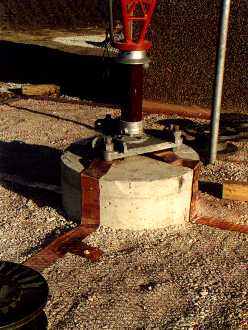 If you look closely, there is a copper mesh all around the antenna base. Around the base perimeter, there is a wide copper strap. You can't see the radials directly in this picture, but there are a lot of them: typically 120. They are attached to the copper strap around the perimeter. You can see a couple empty spools on which the radial wire was probably delivered (and by my estimation, there are many more such spools not in this picture).

Broadcast stations don't want antenna currents in the ground because the ground is not a great conductor. Resistive and magnetic losses in the ground would divert a significant fraction of electrical energy into warming the ground, but that energy would better be spent radiating a signal. When broadcasting at tens or hundreds of kilowatts, the associated currents can be quite huge, and the losses can get really big, really fast according to Joule's law: $P = I^2 R$.

An AM broadcast station will also have ground rods, but these are not for the operation of the antenna, and under normal operating conditions carry only negligible, ideally zero current. Their purpose is lightning protection.

You can operate a vertical antenna without radials, and it is sometimes expedient to do so. It is however quite inefficient. Keep your radials, or use an antenna such as a dipole or loop which does not require a ground plane to operate.

Some properties in some parts of the world are wired using a 'protective multiple earth' (PME) system, and bringing a 'real' earth into the shack can provide a hazard if there is a mains electrical fault. (Basically, if the neutral wire becomes loose and there is a live-to-chassis type of short, then full mains current would flow through your antenna cable. Not likely to happen, but potentially very dangerous if it did. What WERE they thinking?!? My old house in the UK used to be wired like this until I rewired it myself.)

Check out this page http://en.wikipedia.org/wiki/Earthing_system and find out (really find out) how your property is wired, before bringing an earth into your shack.

I gather from your user profile that you are in the US, and I don't know if PME has ever been common practice in the US - but where safety is involved I would always recommend checking first.

» An "r-f ground" does not exist at the distant end of a conductor having its near end connected to a buried, vertical ground rod. «

Probably the antenna system described in the OP already has a physical path connecting one conductor of its 2-conductor transmission line to some form of a nearby "ground" reference, such as the buried ground rod of the a-c service lines entering the building, and powering the transmitter.

Other things equal, there would be relatively little electrical difference in the performance of this antenna system if the transmission line conductor now connected to the common point of the radials of the ground plane antenna was disconnected at the antenna feedpoint, and reconnected there to a different conductor providing essentially the same function.

Yes. There's no such thing as a separation between RF and Safety ground. I highly recommend the book Grounding and Bonding for the Radio Amateur that clarified a lot of the myths and issues I was having, including this separation of the two grounds.

It makes sense to analyze a grounding system from the point of safety, RF and lightning protection but it's still one system.

For example: your ground cable could twist and bend and have no effect on safety, but reduce the lighting protection as those don't like bending.

Another example: having your ground rod at 1 meter, 10 meters or 30 meters from your house will make very little difference for the safety, but it will affect how it behaves at different frequencies (and you might want them all if you operate at many different frequencies).

I would actually say that trying to keep the safety and RF ground separate is probably dangerous, because both grounds will end up acting as both things and most likely your RF ground might not be safe enough (it might not have wire that is thick enough to dissipate a discharge for example).

Properly grounding an antenna using a ground rod deep into the earth will provide a much better ground than the radials (aka ground planes.)

The radials act as a pseudo ground and provide other advantages as well. By bringing the ground higher up will help project the signal further distances and simultaneously help with sporadic RF interference with neighbouring electronics. Depending upon the location of the antenna it will also provide resistance for lightning strikes.

Not the answer you're looking for? Browse other questions tagged grounding earth or ask your own question.

23
How can I protect equipment against a lightning strike?