Do VNA (nano) suffer the same effect of coax length to swr, as swr meters do?

A SWR meter will vary in swr with coax length if unbalanced as your coax length is around 1/2 wave length multiple.

Does a VNA ( nanoVna ) in this case experience the same effect, (obviously assuming calibration is done for varying lengths) will a certain length coax lead to a incorrectly low swr ??

The NanoVNA, and any VNA, when calibrated with open, short and load standards, can correctly measure through an arbitrary two port network, like a lossy, imperfect cable.

Any combination of reflections and losses, like a series of cables, adapters, etc, can be reduced to a single reflection and transmission device, and fully calibrated. Calibration is done at each frequency independently, and the exact length of the cable doesn't matter.

But your statement about a regular SWR meter isn't correct. A working SWR meter should read the same for modest changes in cable length, because the standing wave ratio or the magnitude of the reflection coefficient does not change with cable length, only the phase does. The forward and reflected power are the same at any position in the cable. One caveat - if the cable is long enough that the loss starts to become significant, then the SWR will appear lower than it is at the antenna.

A few ways you might see the SWR change with cable length, apart from a defective SWR meter:

A SWR meter will vary in swr with coax length if unbalanced as your coax length is around 1/2 wave length multiple.

I have never seen an SWR measuring device that was designed to be used with a balanced load. This could certainly be done, but such devices are usually intended to measure SWR on a coaxial, i.e., unbalanced, line.

For the purposes of SWR measurement, the feedline is part of the "load." The load attached to the SWR meter includes the feedline and everything attached to it; e.g., antennas, splitters, stubs, etc. A properly designed and operated SWR meter will correctly measure SWR regardless of the load.

In general, the SWR at the shack end of the feedline will not be the same as the SWR at the antenna. Feedline loss attenuates the driving signal as it travels forward along the line, so the signal available to be reflected at any point is reduced. Similarly, feedline loss attenuates the reflected signal as it travels back along the line, reducing the signal available to be detected by the SWR meter. In general, feedline loss reduces the SWR observed at the shack end of the feedline.

The effects of loss and phase can be seen by plotting the impedance along a transmission line on a Smith chart: 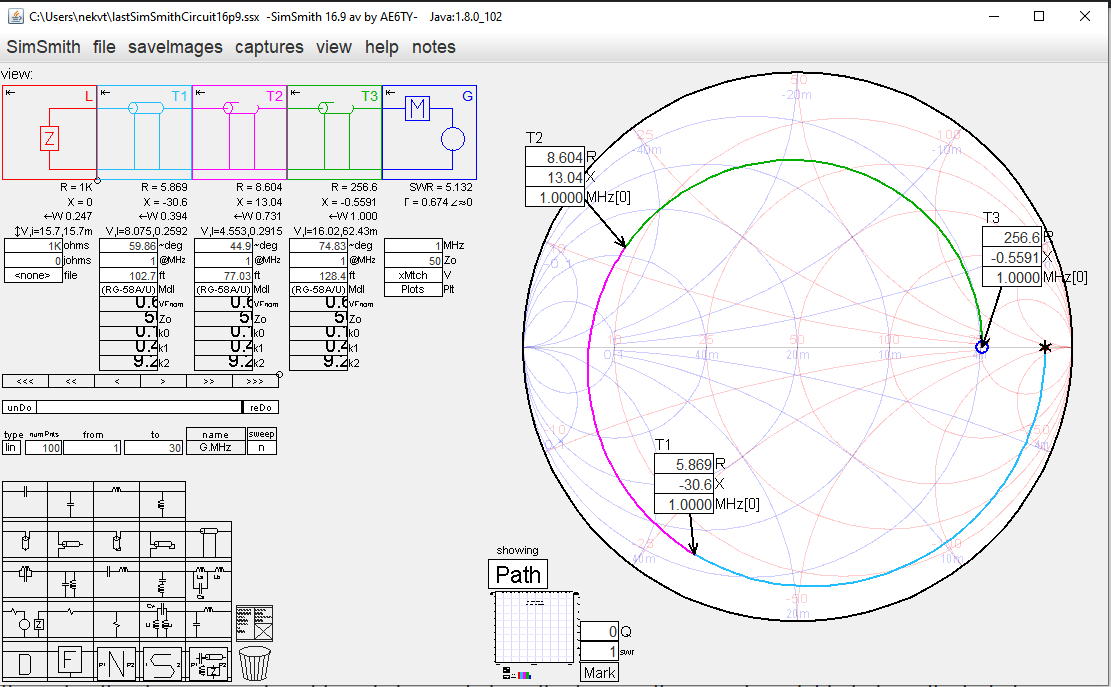 Not the answer you're looking for? Browse other questions tagged impedance-matching swr-meter or ask your own question.

8
SWR Measured at the Transmitter versus SWR at the Antenna
5
Powering transceiver and SWR/power meter from same supply?
1
Exactly why do some SWR meters give a changing reading depending on the length of coax used to connect to an antenna?
6
Do I need a separate SWR meter if the transceiver has one built-in?
2
Why SWR significantly changes with adding 10-30 meters of coax in presence of RFI choke?
3
Looking for criticisms on my VNA-like SWR meter I am designing
4
Debugging SM0VPO's spiral loop antenna build
0
Estimating SWR based on multiples of resonant length
1
How to understand same SWR but different Tx/Reflected power
1
Common-mode choke (CMC) hurting my SWR. Live with it? Drop the choke?