Here's what I am working on, and someone please tell me if I'm doing this right or wrong, but be kind and gentle.

Also, trying to figure out how to connect my SO239.

Trying to make it as small as possible for easy bugout if it comes to it, but also out of strong and durable materials.

Am I doing this all wrong?

Still trying to figure this out...

After finding more information, I have found new knowledge...

This project ends up being in a Quad beam format with a reflector, driven and director in a 1/8WL configuration.

I also realize that tuning this will not be easy.

EDIT: I have added a photo of the 3 elements - Like I said, it is very small.

IF it works, then it does... If not, then I have gained a good amount of knowledge from the experiment. Isn't that what HAM is all about? 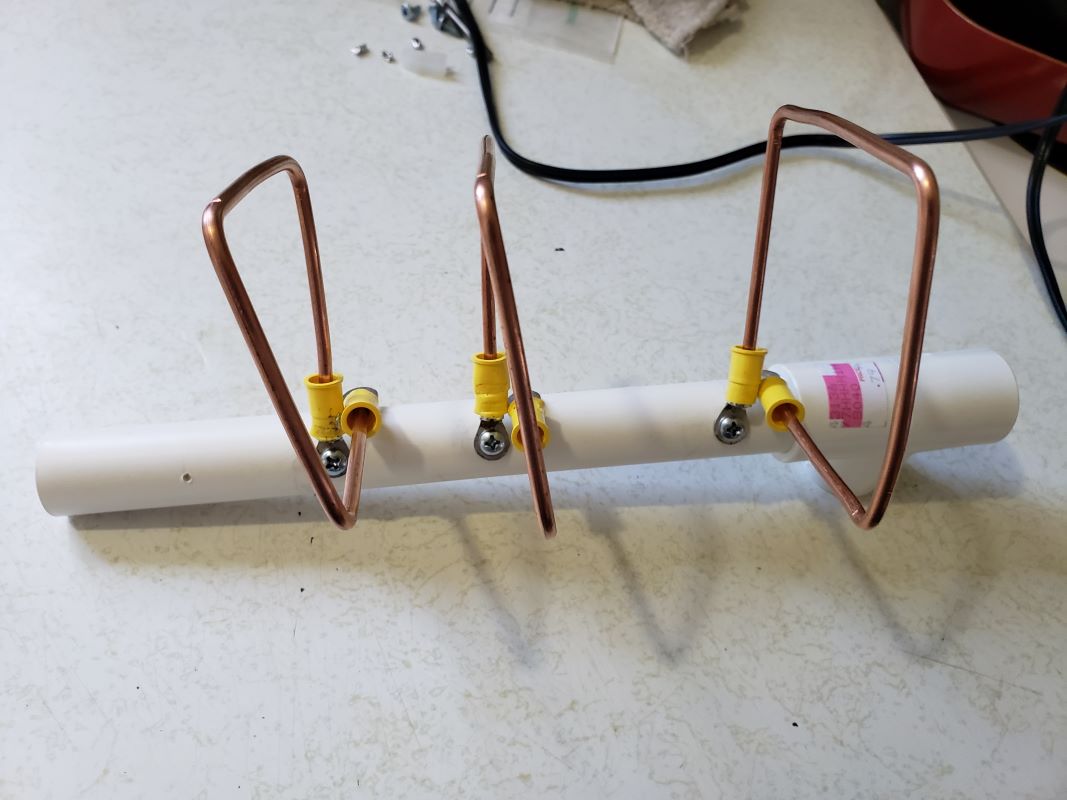 Yagi antennas require an exact set of lengths and spacings to work properly.

The lengths are all near a half wave but there is some subtle tuning to get the currents to the appropriate phase.

Spacing can be between a quarter and a half wave but different spacings affect the optimum lengths.

So your example of a 5/8 wave reflector won't work as a reflector, and 12 inch spacings sound a bit too small. The driven element needs to be about 1/2 wave long as well, slightly shorter if it's a folded dipole.

I recommend looking at some standard yagi designs from page 67 onwards in this book - Antennas in practice for some ideas. I've built a few of these and they've worked well.

For example: The smallest one has these parameters:

This has a gain of 9.1 dBi. You can see the subtle change in length between reflector and director. At this frequency these probably need to be correct to about 1/4" at the most. The document has more detail about correcting for different element diameters and if they're connected to a metallic boom.

I applaud your attempt to satisfy a need. Unfortunately, your design will not achieve your goals.

Here is a model of your design: 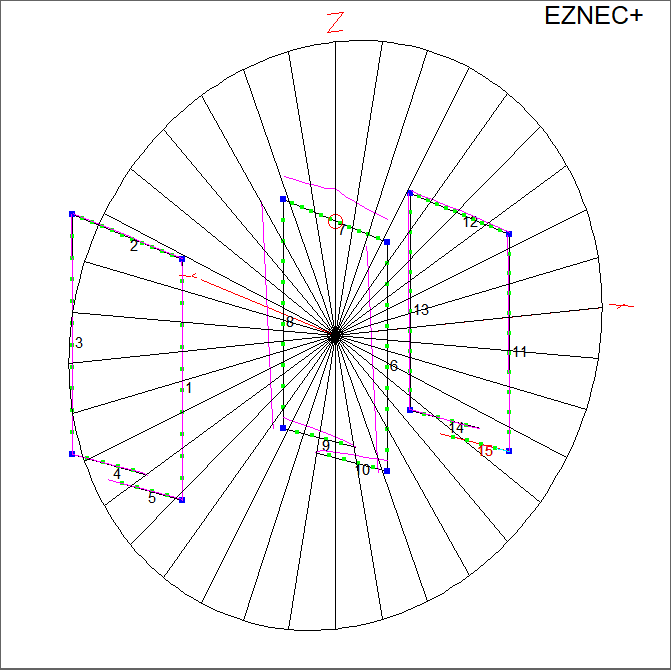 The pattern shows none of the front-to-back directivity you want from a "beam" antenna. In fact, the pattern is not affected at all by the addition of the "reflector" or the "director". The pattern has about 1.4-dB gain over an "isotropic" or point-source radiator and the feedpoint resistance is very low, about 0.2-$\Omega$, with a lot of capacitance reactance, as one would expect from an electrically-short, bent, "doublet" radiator. It would be very difficult to match this impedance to a coax feedline.

The parasitic elements don't influence the radiation pattern because no current flows in them. No current flows because, like the driven element, they also possess very high reactance, which impedes the flow of RF current.

If one closes the driven element to form a loop, its pattern changes: 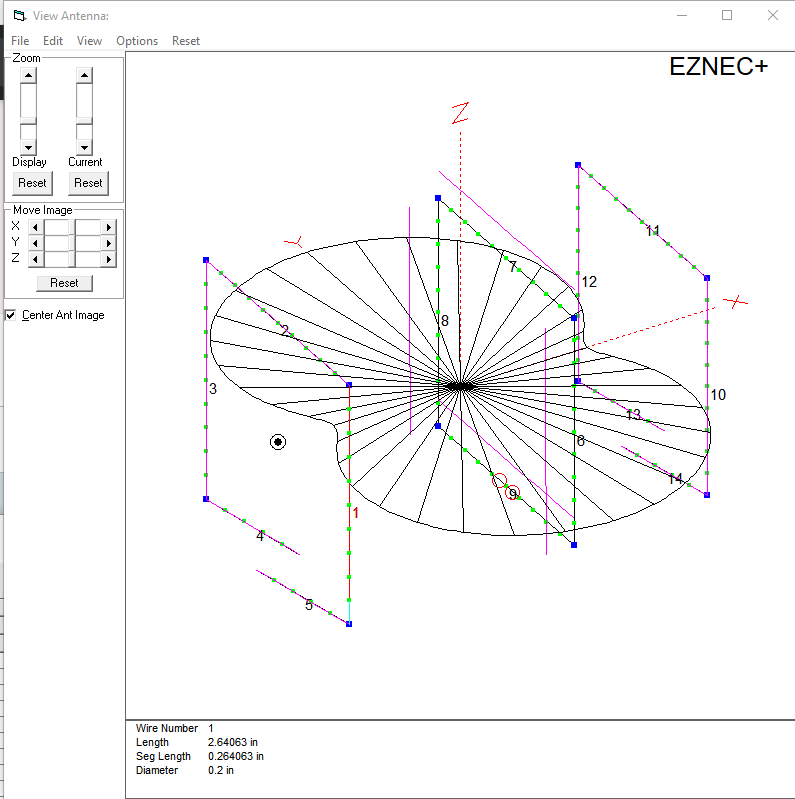 The maximum gain of this antenna is about -2.5-dB; that is, only about half the incident power is radiated in the preferred direction, which is perpendicular to the axis of the "beam" ... and even less in other directions. This is the same pattern as the driven element only because, again, no current flows in the "reflector" or "director." This is the pattern you would expect from a single loop (the driven element) that is, electrically, very small. This fact is reinforced by the very low feedpoint resistance of less than 0.1-$\Omega$ with a very large series reactance.

Closing the "reflector" and "director" loops has very little affect on the current that flows in the elements; it merely changes the sign of the very high series equivalent reactance. The closed loop elements of a quad must have a circumference on the order of a wavelength at the operating frequency to perform the way you intend. Non-closed elements, like those of a Yagi-Uda type array, must have lengths on the order of a half-wavelength. Reducing the size of a quad loop element by a factor of 8 defeats the element behavior on which the array depends, regardless of whether the elements are parasitic or individually driven.

You could rotate the elements and feed them with currents that would produce a directional pattern: 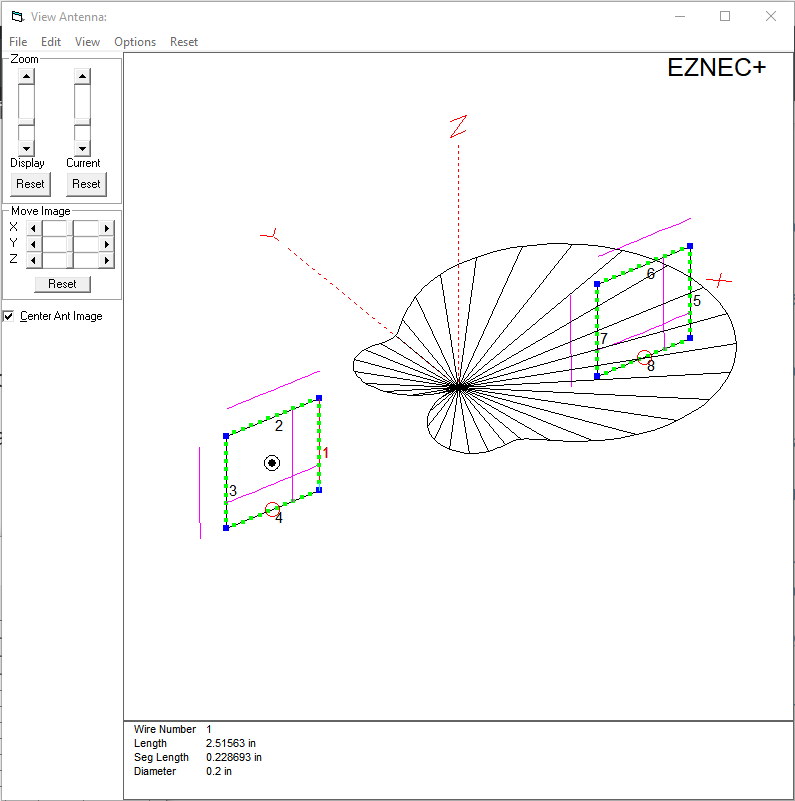 But the maximum gain in the favored direction is still negative and the feedpoint impedance is still very low, making it very difficult to match to a coax feedline. This arrangement is similar to the arrays of small loops used for directional receiving antennas on the lower frequency bands where wavelengths are much longer. Low band receiving antennas profit from their ability to reject noise from non-favored directions, improving the signal-to-noise ratio of the signals from the desired direction. Negative gain in a receiving antenna can be compensated by the addition of preamplifiers of sufficiently low noise figure.

Like many budding hams, I traveled the same intellectual road. Finally, I was forced to realize that you (or, at least, most of us) can't break the laws of physics. The only way I have seen to accomplish your goal is to use an array of fractal antenna elements which, essentially, fold a wavelength of wire into a much smaller area than the classic quad-type loop occupies. 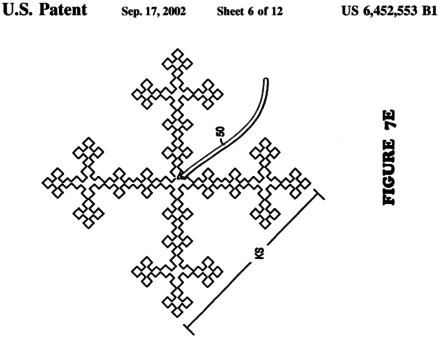 6
1280 MHz propagation out of a mountain valley
3
Dual-band yagi on single beam: element positioning
3
2 antennas and 2 amplifiers connected to same exciter radio
2
Is it possible to determine if I'm adjusting gamma match in correct direction with an SWR meter and if yes, how?
0
pull-up inductors for a differential PCB trace antenna
9
Aluminum vs copper antenna element lengths
2
What happens to the transmitted power cancelled out by a yagi antenna's reflector?
3
What type of antenna is this?
0
Pondering variations on the vertical bazooka antenna
1
Yagi performing far worse than a dipole