Implementing a BPSK and 4-FSK transmitters in GnuRadio (GRC) with USRP?

Currently trying to transmit a BPSK and a 4-FSK(MFSK) signal via GRC using USRP, I have two attempts at it but don't seem to be going anywhere. Still fairly new to GRC. For the BPSK, how will this signal appear on the spectrum analyzer? I have seen general images of the signal shape online but pretty sure what I see is not it. Will I be able to hear the BPSK signal, if so what will it sound like?BPSK Flowgraph

As for the 4-FSK, I seem to have something but the spikes I generate are at different amplitudes in comparison with a FSK signal I had generated a while ago that had the spikes at the same/similar amplitudes. 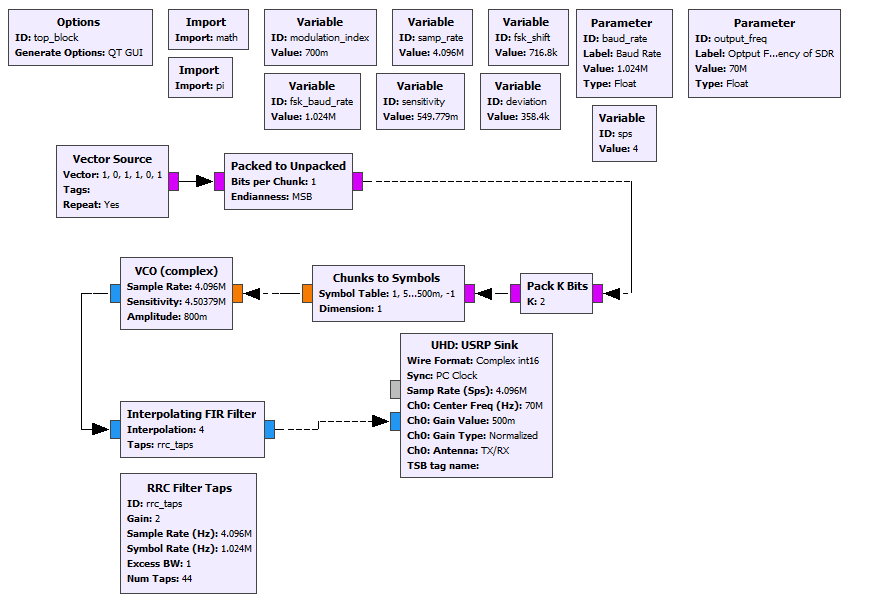 I can share my flowgraphs if it helps. Also it would be great if anyone had known working flowgraphs for these concepts to share for comparison or even be able to edit some features of mine. As for the details I care about, I really need to be able to specify the excursion/deviation between the spikes.

There are a lot of ways to make those transmitters, but I think for a beginner the simplest options are:

Not the answer you're looking for? Browse other questions tagged software-defined-radio gnuradio transmitter dsp or ask your own question.

3
How to generate FSK with Matlab and radio
2
BPSK raw data aquisition with HDSDR and FLDIGI
2
How link between gnuradio and baudline?
1
Transmit on multiple frequencies with USRP using GRC
1
How to make a software defined radio using USRP and GRC
0
GNU Radio BPSK reception from ICOM SSB audio
0
Frequency modulation with gnuradio
0
FMCW radar with USRP and GNU Radio Companion