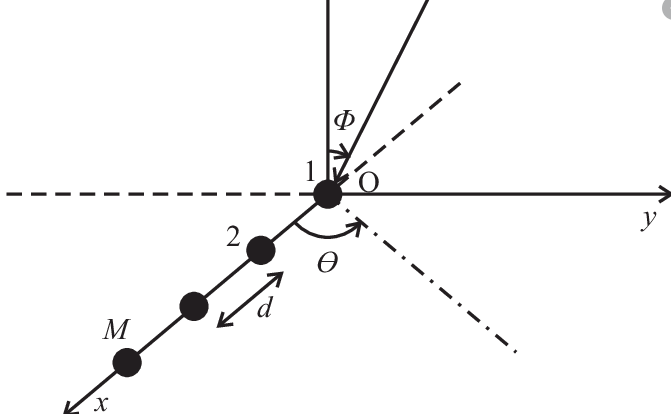 We know that, from elementary array theory, the total pattern (for instance in terms of E-field) may be evaluated, in case no phase shift is applied to the excitations, as:

where the last term is the array factor. $\vec{E}_{single\,element}$ is the single element pattern when it's isolated in free space.

Obviously it is an approximation, since in real life all the array elements won't have the same radiation pattern, because of their different position inside the array and mutual coupling effects. For instance, an element which is at the edge of the array will have around himm less elements than one at the centre, and so will interact with less elements. To take into accounts this effects, I'll call single elements pattern not simply as a unique quantity $\vec{E}_{single\,element}$, but as:

My attempts: in my attemps, it seems that 2) is true. But I'm asking this question because I'm not sure of I from a theory point of view, and because if it's wrong, I have probably done a mistake in my code for evaluating the total field.

The first is still correct, and can be evaluated at any position.

The second is true only at broadside, when $\theta=0$.

In your attempts, do you find that $\vec{E}_{total}$ is the same in all directions? Then you are doing something else wrong, or $d \ll {2\pi\over{\lambda}}$
Or are you accidentally including the $e^{-j{Phase}}$ in the individual element pattern? If you are simulating the elements one by one, with the others' excitation at $0 V$ then of course they already include the whole array term. Perhaps start by considering $\vec{E}_{n} = 1$.

As a hint for getting clean array patterns without mutual coupling: use very short dipoles as elements, instead of resonant dipoles. The radiated power scales down but you can just normalise this, but they don't interact with each other very much.

2
Would a covering like aluminised kapton effect antenna radiation pattern?
8
Phased Array Pattern
4
Vertically orienting beams with antenna arrays
2
Fan dipole radiation pattern
8
How to derive antenna gain from radiation pattern
2
What is the radiation pattern of an EH antenna?
0
Outdoor Terrestial Digital TV Receiver Antenna: 500-700 MHz Band, Can I Make It Work Better?
2
Phase shifts in antenna arrays
2
Destructive interference between two close antennas
3
Why is the total radiated power of array calculated by sum of square of excitation coefficients different from the result by integral of power pattern